Visitors to McCarran International Airport are treated to the sight of a heavily modified Cessna 172 hanging from the ceiling. Emblazoned on each side of the small plane is the word “Hacienda.” Few passing by it in their travel to or from the bright lights of Las Vegas know how remarkable a plane hangs above them. It is, in fact, one of the most unlikely tales in all of aviation.

That legend was built on the strength of one flight, one extraordinary sortie that lasted between takeoff and landing 64 days, 22 hours, 19 minutes and five seconds.

Endurance flights are nothing new. The most famous refueled endurance record belonged to Carl “Toohey” Spaatz and the crew of the Question Mark, which pioneered aerial refueling. Way back in 1929, it remained aloft for six full days. That was only the start of it. By the late 1950s, that record had been broken 10 more times, usually with some type of ground-to-air refueling, and as of September 1958, it stood at nearly 51 days.

That is, until Bob Timm, a former WWII bomber pilot, hatched a plan. Timm, who worked as a slot machine mechanic at the Hacienda Casino, a small family-owned hotel and casino on the Las Vegas Strip, proposed to the owner that a record-setting flight would generate excellent positive publicity, this in a town that was gaining a bad reputation for gambling and gangsters. To his pleasant surprise, the owner agreed!

Timm chose a 1956 Cessna 172 with approximately 1,500 hours on the airframe. The engine was replaced with a new stock Continental 145 cubic-inch six-cylinder engine. Then the modifications started. Out came the interior, except for the pilot’s seat, replaced by a 4-inch-thick sleeping pad, a small sink to allow the pilots to wash up, and a retractable platform assist with refueling and inflight maintenance. A folding step replaced the right passenger door, and the firewall and engine oil system were extensively modified. This allowed the crew access to the rear of the engine to change both the oil and the filter inflight. Both were necessary, as the engine would turn over nearly 1,600 hours during the flight, which was longer by a bit than the recommended time between overhaul for the engine.

The refueling was the wildest part of the plane. It would be accomplished from a specially modified fueling truck, usually on a long straight stretch of road near the low-desert town of Blythe, California. The fuel was fed into a 92-gallon belly tank (another modification) and then pumped into the wing tanks. Food was prepared in the Hacienda kitchen and sent up to the pilots in thermos bottles during refueling. In all, 128 refuelings were accomplished, with the aircraft flying just feet above the pickup truck, near stall speed and with the co-pilot standing on the specially constructed platform.

The first three attempts at the record each ended in failure, the shortest a little over 17 days due to a burned valve in the new engine. The original engine, which had just over 450 hours on it, was reinstalled in the Hacienda. However, Bob decided he needed a new co-pilot. Thus, John Cook, an aircraft mechanic and pilot, joined the team.

“Endurance flights are nothing new. The most famous refueled endurance record belonged to Carl ‘Toohey’ Spaatz and the crew of the Question Mark, which pioneered aerial refueling.”

The Hacienda launched to much fanfare on Dec. 4, 1958, from Las Vegas’ McCarran Field. Alternating pilot duties every four hours, the duo flew as far west as Los Angeles and as far south as Blythe and Yuma, both not far from the southern border. At night, they tended to remain over airports as the terrain around Las Vegas was, and is, not very inviting should a forced landing need to be made. The flight was not without incident. Once, in the middle of the night, both pilots fell asleep for nearly an hour. Only the autopilot and a little good luck saved the day. Then, on the 39th day, the aircraft generator failed, taking with it the autopilot, lights and a host of other items. However, with the help of a wind-driven generator and a hand-driven fuel pump, they pressed on.

By January 3rd, they had set a record but decided to keep on flying to move the record further out of reach for others. Thus, on Feb. 2, the duo landed after flying nearly 150,000 miles. Sixty-two years later, this record still stands. So next time you are in baggage claim at the Las Vegas airport, look up and fondly remember Bob Timm, John Cook and the amazing Hacienda!

Cessna 172: Secrets Of The Skyhawk 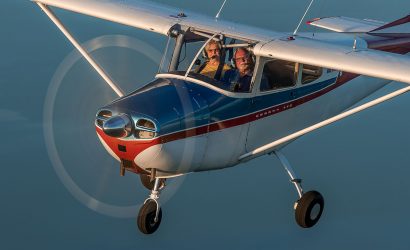