If you think you’ve heard about the Diamond DA50 before, you’re right. A few times, in fact. And along the way, it’s changed configurations on several instances, and the company has serially pursued and then backburnered the program. Still, the airplane’s re-launch at Aero 2019, with a new go-to engine option and retractable gear, generated a great deal of interest, more than we’d expected, and so we got to thinking about why that might be the case. Has Diamond hit upon the secret recipe for the DA50’s success? It very well could have.

It’s hard to blame Diamond for the on-again, off-again march of the DA50. The company originally launched the design late in 2006, back when the market was pretty hot. This was around the same time that Diamond announced another big program, the one for its D-Jet single-engine jet, which, like first jet programs for every company bold enough to tackle one, soon seemed like a newly adopted pet elephant. It must have been a great idea at some point, but before long, it began to take all of one’s attention and resources. Don’t believe me? Ask Piper Aircraft or Cirrus Aircraft, both of which struggled to bring single-engine jets to market, with only Cirrus getting to the finish line. The D-Jet, as you probably know, was abandoned when the market downturn of late 2008 hit, at a time when the last thing that any airplane company needed was a single-engine jet program with no certainty of anything down the road but huge expenses.

Sorry for that diversion into the world of single-engine jets, but that’s precisely the problem: Once you start talking about a jet, it’s all anyone can think about.

With that abject lesson over, it’s back to piston-powered airplanes, namely, the DA50. Diamond launched the DA50 around the same time as the D-Jet. The new single was originally going to be nicknamed the Super Star, in a continuation of the “Star” naming convention that Diamond seemed to like. It was also dubbed “the Magnum” (or maybe just “Magnum?”) for a time. Neither nickname took, but that was the least of its issues.

The bigger problem, and we can’t definitively say that it’s over, has been the search for an engine that’s a perfect match for the DA50. Diamond seemed to consider every possibility, even, at least in passing, the most sensible one, the Continental IO- or TSIO-550 turbocharged six-cylinder opposed engine that’s in thousands of Cirrus SR22s, which, make no mistake, are Diamond’s competition here.

The Austrian firm seemed committed to diesel, though, and even considered the 180-hp Austro diesel; even that seems far too small for a five- to seven-seat single. Austro is another excursion. A Diamond sister company, Austro was forged back in the late aughts when Thielert, which made the auto tech conversion engines for the original DA42 TwinStar (a name, again, no longer used), imploded under the dual weight of financial improprieties that brought the company down along with debilitating service issues with its engine. Among other problems, the engine had a prop gear unit that needed pricey and time-consuming overhauls at ridiculously short intervals.

All of this engine palavering happened as the company was restructuring as business ebbed with the great recession—which kind of seemed like a picnic in the park without bears compared to the grizzly-filled outing we’re now experiencing. Regardless, at the time, even the easier lift of a new piston program proved too much for the company to take on, and Diamond decided to focus on its core single and light twin business, the latter of which was doing well. Twin business was so strong, in fact, that Diamond introduced the DA62, which looks suspiciously like the DA50, which, it turns out, is because the company created it by modifying the already well done, in terms of quality of design and cook time, DA50 airframe, though the project essentially left the single-engine model in the lurch once again.

Then, 10 years after the plane’s launch, the economy was back to business, and Diamond decided to create a DA50 version (the ultimate version, perhaps?) powered by a 450-hp Ivchenko-Progress Motor Sich AI-450-S turboprop. Yeah, we’d never heard of it, either. Diamond even flew a prototype of the Turbine Star (a presumed nickname, for a time at least).

Head scratching ensued. An unpressurized turboprop, and they exist in specialty roles—think Cessna Caravan—would be restricted to lower flight levels where even a smaller turboprop is strikingly inefficient. Pressurizing the DA50 would have been a big step, even though the company has the experience with the D-Jet program, which, of course was pressurized. But pressurizing a small plane is a huge undertaking. It’s one that has been truly successfully undertaken only twice, not counting the Cirrus Jet (which I don’t) by Cessna with the P210, of which almost a thousand found their way into customers’ hangars, and the Piper M350 nee Mirage nee Malibu, which has enjoyed comparable success and continues selling to this day.

So back to the DA50, whose would-be manufacturer, Diamond Aircraft, found itself under the new ownership of Chinese firm Wanfeng Aviation International in 2017. The new owners, as new owners are wont to do, decided to take a new look at existing programs, and the DA50, a dozen years into its peripatetic existence, looked still like six or seven intriguing concepts searching for an identity.

At the 2019 Aero Friedrichshafen trade show in Germany, Diamond launched that identity (well, kind of) by announcing that the DA50 would be available in three different, closely related configurations, though the one that got everyone’s attention, and that is the subject of this story, is the retractable-gear, 300-hp, diesel-powered version, which seems to me the right combination of features to make the plane as much of a game-changer as the company’s award-winning DA42, which redefined the economics of twin-engine training.

Shortly thereafter, Diamond Aircraft made the first flight of its DA50 with a gear retraction. The flight, which took place at the company’s headquarters in Wiener Neustadt, Austria, was about the fifth first flight of the DA50, but this one got people’s attention.

The DA50 is a carbon fiber five-seat, low-wing retractable gear single that one might think would compete pretty closely with the Cirrus SR22, but maybe not.

Here’s how it differs, design-wise, anyway. The DA50 has, claims Diamond, quite credibly, in fact, a larger cabin than any comparable single. A five-seat lower-gross-weight version and a higher-max-weight seven-seat model are in the works. The seating setup is similar to that of the DA62, which, again, is based on the DA50 fuselage. And while it’s not a typical third-row look or feel, it’s a surprisingly comfortable and light-filled rear seating section. And the gear retraction development was a piece of cake, as it had already been done for the DA62.

Very importantly, the DA50 runs on Jet-A, which is all kinds of good. The diesel will give the DA50 a typical long-range fuel flow of less than 10 gph while offering cruise speeds of 200 knots on a slightly higher, still very modest fuel flow. While Diamond hasn’t released much data on the plane yet, it’s not hard to guess that even if you were looking at 12 to 13 gph in order to get that 200-knot speed, you’d still be burning about a third less fuel than a turbocharged Continental TSIO-550 engine that powers the market-dominant Cirrus SR22. So with a comparable amount of tankage, you’d be looking at a range of around 1,500 nm, which admittedly turns even 200-knot legs into long sits, but many see it as usable range. Just ask early owners of the originally engined Piper Malibu, who can’t stop talking about their plane’s range.

The engine in the DA50 is a Continental CD-300 V-6 diesel that spins the prop through a gear reduction mechanism to get 2,300 max rpm. The engine, initially developed by Thierlert, has been optimized by Continental and promises several benefits no competing engine can.

For one, it’s quiet. We flew the precursor to the CD-300 in a Cessna 182 under development several years ago and were impressed by how quiet it was, both inside and, presumably, outside, too. And with a max rpm of 2,300, the prop noise is very low, which will lead to lower takeoff noise, something important everywhere but especially in Europe. There’s also the fuel efficiency, and while diesel aero engines won’t woo hard-core environmentalists any time soon, they do have two real environmental advantages.

Because it’s more efficient than comparable power gas piston engines, the CD-300 uses less fuel. Its economy per mile will likely be better, perhaps a good deal better, than many big sport Utes, in fact. On top of that, the fact that Jet-A, say what you will about it, is not 100LL means its contribution of lead to the environment is zero. The engine will run on bio fuels, some of which are already being developed, though the crash in oil prices associated with the twin catastrophes to oil markets of the Russian-Saudi feud and the coup de grace and virtual standstill in transportation that COVID-19 had brought us, will surely give some of those companies pause, perhaps permanently so. It’s hard to compete against buck-a-gallon gas. We pray those prices find their way to our FBO ramps one day.

The DA50 wouldn’t be the first production plane with a diesel engine. Diamond has built thousands more of them, including its DA42 and DA62 twins, as well as its DA40NG. The DA50 would be the first diesel high-performance single, and that’s a big first. Four years ago, when we first flew the DA62, we called it a formidable competitor to the SR22, and while the Cirrus single’s numbers have continued to impress, the DA62 has shown just how powerful an argument that economy makes for high-performance planes.

As much as we love the company’s designs, we readily admit they’re a little quirky. The DA40 Diamond Star features a three-door design, all big gull-wing doors, and the greenhouse level of natural light is both a revelation and a challenge when the sun is high.

The handling of even the company’s twins is also very much in the company’s tradition—it got its start in the early ’80s as a high-performance sailplane manufacturer, and the long-span, narrow chord wing design has stuck around. Personally, I love the feel of it, and, with a similar configuration to the DA62, the DA50 will very probably fly in a similar way, which is to say, light, nicely harmonized, responsive and fun.

So, there you have it. The DA50 will be a fast, fuel-efficient, capable personal transportation plane, which alone makes it a market presence. Add in the large cabin, advanced avionics (a three-screen Garmin panel, says Diamond), worldwide fuel availability and great ramp appeal, and it’s no wonder people are excited about the DA50. We are.

Diamond had hoped to announce further news on the DA50 at Aero Friedrichshafen 2020, which was canceled in the wake of the COVID-19 pandemic, and it had hoped to earn certification for the plane by the summer of 2020, which would have dovetailed nicely with EAA AirVenture Oshkosh 2020, which has also been canceled.

So the long-suffering, oft-delayed, frequently renamed, and regularly re-engined DA50 continues its trek to market. What that journey will look like and how long it will take, if indeed it happens at all this time around, is hard to say. But if and when it does, we think the DA50 will have a lot to offer to pilots, including features and benefits available precisely nowhere else.

Correction: The text of this article has been corrected to show the correct lineage of the Continental CD-300 engine. It was originally developed by Thierlert and not SMA, as the original article stated. We apologize for the error. 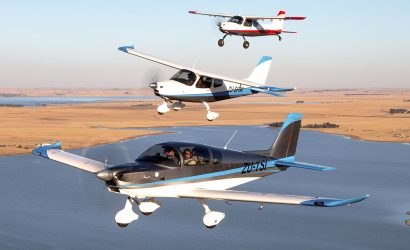