The 1930s truly were the Golden Age of aviation design. The increased demand for air travel, improved engines and aircraft systems, and the influence of art deco streamline design combined to produce some of the most beautiful and functional aircraft of all time, like the Boeing 247, Northrop Alpha and Lockheed Electra. However, the development of the iconic Douglas DC-3 is an amazing story all on its own.

Back in 1929, Transcontinental Air Transport (TAT) inaugurated the first coast-to-coast air service by combining both rail and air travel. Passengers boarded the train in New York’s Grand Central Station, traveled on to Ohio and then boarded a Ford Trimotor for the daytime flight to Oklahoma. At nightfall, they were back on the train, in sleeper service, to Clovis, New Mexico, where they again boarded a Trimotor for the rest of the trip to California. Two trains, nine flights and 48 hours coast to coast.

By 1933, the Douglas Aircraft Company had a bonafide success on its hands. The new Douglas DC-2 was a truly modern, 14-seat, narrow-body airliner that offered inflight comfort and amenities that other competitors, such as the Boeing 247, did not provide. With its dual nose-mounted landing lights, slab-sided narrow fuselage, angular vertical tail and reliable Wright Cyclone engines, it sold nearly 200 aircraft, over double its nearest rival. It even made money. However, the dream of true transcontinental air travel persisted, and American Airlines CEO C.R. Smith had a better idea.

In what has been described as a “marathon phone call” to Donald Douglas, Smith laid out a requirement for a derivative of the DC-2 that accommodated passengers in fold-down sleeper berths, as well as convertible daytime sleeper seats. This required a much larger cabin diameter to accommodate the upper and lower berths, as well as larger wings, engines and tail surfaces. With his company doing all it could to keep up with DC-2 orders, Douglas resisted the idea, but once American placed a firm order for 20 Douglas Sleeper Transports, the work began in earnest.

The Douglas Sleeper Transport was designed to cross the country in less than 20 hours with three stops. Fourteen passengers were accommodated in comfortable seats that the cabin crew reconfigured at night to provide upper and lower berths.

Crew changed, aircraft were refueled, but the passengers continued to the destination with little disturbance. The first DST flew on Dec. 17, 1935 (the 32nd anniversary of the Wright brothers’ first flight), and soon entered service. DSTs, by the way, were easily identified by a second row of four small rectangular windows on each side of the fuselage, located above the normal cabin windows. These allowed the upper berths a scenic view outside the aircraft.

The first seven aircraft off the line were DSTs, christened Flagship SkySleepers. While the accommodations were luxurious, the concept never really caught on, and DST production ended in 1940.

This is where the story takes a big turn. The eighth aircraft of the line was actually the first DC-3. Configured to seat 21, the DC-3 became an instant hit based on the economics of more, cheaper seats combined with the plane’s already voluminous interior space. Douglas would see nearly 16,000 DC-3/C- 47 variants in the U.S. and under license overseas. These included 500 Japanese L2D variants, built initially under license, from 1939 to 1945, and nearly 5,000 Soviet Li-2 licensed variants produced through 1952.

Smith’s requirement for a sleeper version of the DC-2 led to the development of a legendary plane. With a cabin nearly a third wider and with much greater interior volume, this was the aircraft that made revenue for the airlines, won wars and became a legend. While the DST concept quickly faded, replaced by multi-class seating and lie-flat seats, the DC-3 became a part of aviation lore. But it hasn’t faded away. Nearly 200 Douglas DC-3s remain in service today, a fitting tribute to Donald Douglas’ outstanding design, C.R. Smith’s persistence, and a big helping of good old-fashioned luck. PP 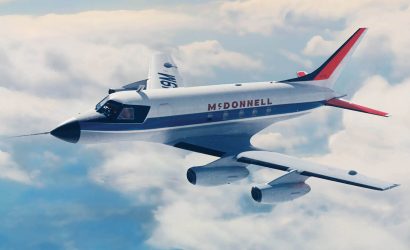