The 2-inch-square advertisement in the April 2021 aviation monthly proclaims: “For Sale, One Off Prototype, The Very First Business Jet, Very Low Time.” The accompanying image is of a sleek four-engine mini airliner, a stylistic cross between a Douglas DC-8 and a Convair B-58 Hustler. This is the McDonnell 119/220, the very first business jet, which you probably never heard of.

The year is 1957, and the jet age is in full swing. Jet fighter protypes fill the skies at a rate of three or four per year. The Boeing 707 will make its first flight and enter service with Pan Am within a year, and the Douglas DC-8 and Convair 880/990 will not be far behind. The McDonnell Aircraft Corporation is right in the thick of it with its successful F-101 Voodoo interceptor and the equally impressive Banshee and Demon fighters for the Navy. And its iconic F-4 Phantom is on the drawing boards.

In this heady environment, founder James McDonnell and his board of directors decide to pursue a military contract for a jet-powered utility/cargo aircraft. Up until this time, McDonnell (the merger with Douglas would come many years later) had restricted its efforts to jet fighters and missiles. However, since the jet technology was spinning off from military projects, it seemed if not a sure bet, then one it could afford to take, at least.

The McDonnell 119 was an elegant design with deeply swept wings and tail surfaces, four engines in separate pods under the wings, and a roomy cockpit with a large greenhouse. The prototype had a service ceiling of 45,000 feet, a max range of 2,500 miles, and a maximum speed of around 490 knots. The cabin was designed for 10 passengers in a luxury configuration or 29 in three-abreast seating. Its first flight occurred in early 1959, and the aircraft’s performance and handling qualities met or exceeded all expectations. And the aircraft had a distinctive appearance, more like a fighter bomber than a business jet.

Unfortunately, the winner of the Air Force UCX (Utility-Cargo-Experimental) competition was the Lockheed Jetstar of “Goldfinger” movie stardom. The reason for the selection was likely a bit complicated. However, it is thought that the underslung engines on the McDonnell 119 might have been considered too vulnerable to FOD ingestion.

Undaunted, McDonnell repackaged the 119 as the McDonnell 220 and went after the civilian market. The newly christened 220 earned its Federal Aviation Type Certificate in October of 1960, making it the “first certified business jet.” A glamorous marketing video, available today on YouTube, extolled the virtues of a large stand-up cabin and coast-to-coast range. Included is a novel air jet system below the inlets to break up the vortices that develop and lift foreign objects into the engines. While a deal with Pan American seemed to be in the offing, it was not to be, and it appeared the McDonnell 119/220 was headed toward the scrapyard, the usual destination of failed prototypes.

However, this is where the story gets interesting. McDonnell decided to utilize the 220 for several years as a corporate transport, where it excelled. However, around the time McDonnell merged with Douglas Aircraft, the 220 was deemed excess. Next stop was the Flight Safety Foundation for crash survivability research, which it survived intact, another miracle. By the mid-’70s, the 220 was stripped and painted for a new owner. And while the Jetstar had its James Bond moment, rumors abound that the McDonnell 220 prototype had a brief but exciting career in covert South American operations.

And now, as Paul Harvey used to say, the rest of the story. If you fly to the El Paso International Airport, you may find the McDonnel119/220 prototype parked on the general aviation ramp, waiting for its new owner. So, just maybe someone will step up and get this incredible airplane on display or, even better, back in the air where it belongs! 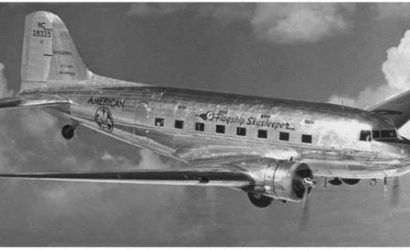