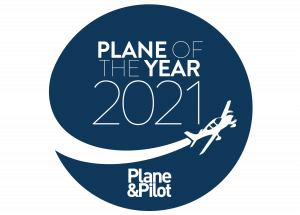 This year’s Plane & Pilot Plane of the Year is the Diamond DA50, the big single from the Austrian plane maker that has been more than a decade in development, which makes its certification by EASA last year even more meaningful, seeing that it was so hard fought. It’s one of the most unusual and, in some ways, compelling piston singles to emerge in decades.

If the year 2020 was a hard one for general aviation, and it was, for manufacturers, 2021 was even tougher. Plane builders were hardly immune to the kind of global pressures we’ve heard so much about, including scarce materials, supply chain disruptions, worker shortages and reduced FAA availability, all of which have conspired to make it hard to build existing designs, let alone develop and certify new ones.

But there were a couple of real gems, one that we’ve known about for more than a decade, and one we were just introduced to. Both enter the arena as real players in markets dominated for years by planes from other makers. We expect both to make inroads.

It’s often said, but it’s not often true, that this plane is different than any plane that’s come before it. This is true for the DA50. To understand what it is, imagine if Cirrus were to build a diesel piston engine-powered plane based on the Cirrus Jet and all that implies.

The DA50 has some built-in weaknesses that many would have presumed would have made it questionably interesting to potential buyers. Such is apparently not the case. The airplane is, based on our observation, the single most intriguing design on planeandpilotmag.com for the past couple of years.

Like so many forward-thinking designs, the DA50 was for years a great airframe in search of the right engine. It had to be powerful enough, at least 300 hp, stingy with the fuel burn, easy on pilots in terms of noise and engine management, and capable of flying on fuel you can get anywhere in the world. Of course, that’s a diesel, but that correct diesel didn’t appear on the scene until the emergence of Continental’s CD-300, six-cylinder 300-max hp/270 hp continuous turbodiesel, which combines good power with a quieter noise profile than competing piston sixes while tacking on single-lever power. It’s a compelling package.

The power demands are very real, as the DA50 RG, despite its carbon-fiber frame and wings, is a substantial airplane, with an empty weight of 3,175 pounds and a max takeoff weight of 4,407 pounds. It’s a big and roomy airplane. There’s seating for five, and not seating for four/five but actually five. The seating layout is the same as the DA62 diesel twin, save the two smaller seats in the back, which the DA50 RG lacks, though the space is there and is great for bags, a better use of the space, in our view. Headroom, shoulder room and window area are all unsurpassed. The cabin environment is spectacular.

The rough spots: It’s not as fast as many would like it to be, with a max speed at 16,000 feet—it is not pressurized—at max continuous of 180 knots. Its max range, at a power setting we presume was a good deal less than max continuous power, is 750 nm. That isn’t a lot of range compared to the Cirrus SR22, which one would assume is its primary competitor, though it is enough, apparently, for many pilots, who have expressed interest in or put their money down for this airplane that isn’t even FAA certified yet. And remember: All that travel will be done in a great space. The culprit isn’t a thirsty engine—Diamond says the CD-300 consumes just 9 gph at 270 hp, about half of Continental’s 315 hp TSIO-550 gas piston engine, which powers the Cirrus SR22—but rather a lack of fuel capacity. It holds just 50 gallons of Jet A, and finding space to put more is problematic, as there are no wing nacelle fuel tanks available for this single-engine model.

It’s also not an easy airplane to hangar. With a wingspan of around 44 feet and a tail height of nearly 10 feet, few tee hangars would be a fit.

How successful will the DA50 be, sales wise? Time will tell. Diamond expects certification for it later this year or early next year. We’ll fly it first chance we get, too.

Read “Will The Diamond DA50 Redefine Personal Flying” to learn more about the plane.

Plane of The Year 2: The Sling High Wing

Our other honoree for a Plane & Pilot Plane of the Year award is Sling Aircraft’s new High Wing, which should start showing up on U.S. shores soon. The High Wing takes all of the goodness of Sling’s four-seat long-wing model, the Sling 4, and translates it into a high-wing form factor, with the remarkable 141 hp Rotax 915-iS supplying the motive force. With a comfortable four-place cabin, Garmin G3X Touch flatscreen avionics, including a capable integrated autoflight system with envelope protection built in, sharp and easy flying manners, and downward visibility to beat any low winger, the Sling High Wing is a powerful competitor to the most popular four-seat amateur-built plane on the block, the much-lauded (and rightfully so) Van’s RV-10. But you can put big tires on this one if you want, and we’re guaranteeing you right now that that will happen.

With the unveiling of its new Smart Glide utility, Garmin has created yet another capability that would have seemed like science fiction 20 years ago but that today can seamlessly and in the background always be ready to help you glide to a safe landing if your plane’s engine were to quit. It is, granted, a capability you hope you’ll never have to rely upon, but if you do, it could be a lifesaver. A Smart Glide description could fit in a fortune cookie: “Lost engine power? Smart Glide shows you where to go.” But the more you look into what that calculation really involves, the more complicated and intriguing it becomes.

Smart Glide works in concert with a compatible Garmin display and navigator. The utility, which is all software and is very low or no cost in addition to the hardware it teams with, does this: You lose engine power, you activate Smart Glide (either by a three-second push of the Direct To button or the dedicated guarded panel button, if there is one), and Smart Glide puts a ring of where your glide range is, based on the plane you’re flying, obviously—the setup is done by the installer. It nominates the best airport for you to go for, offers alternate choices, gives you frequencies, and shows you your inflight situation in a colorful and easy-to-interpret manner. You do the flying.

With Smart Glide, Garmin has once again advanced aviation safety in a way that requires little of pilots in an emergency situation while helping them make the quick and smart call and getting the most distance out of their airplane’s glide range.

Read “4 Questions About Garmin Smart Glide You Hadn’t Thought About” to learn more about the technology.

There is nothing simple or easy about creating a head-up display, but the folks at SkyDisplay have pulled off something really big in bringing to market a low-cost, high-performance display that essentially does what even the most advanced HUDs do, blend the airplane’s flight instruments (and then some) with the pilot’s view of the outside world so that the focus can be on what matters, the outside environment.

A HUD enhances the view of the outside world by projecting an image on a transparent window sitting right in front of the pilot’s eyes. It is most useful as a landing aid, though it can be used throughout the flight. Without a pilot taking their eyes off of the runway, the HUD shows a wealth of information, like runway location and flight path and velocity vector, all features we’ve come to know and love on flat-panel flight displays. But the HUD places all of that information right in front of the pilot’s eyes and not on a screen below the pilot’s sightline to the outside world, where the stuff you don’t want to run into lies. The value in allowing pilots to focus all of their attention on the outside world makes for more precise approaches, always valuable but especially when flying low-weather precision approaches.

A true HUD is conformal, and the SmartDisplay is. What that means is, the view the head-up display shows you using its additional enhanced vision technology matches what’s actually out there in the real world. If it displays the runway end, well, that runway end had better be exactly where the HUD says it is. The pilot has to do nothing but fly. The scan is right in front of their eyes. The data on the glass is focused at infinity, so it seems to just float upon the glass, so the pilot doesn’t have to focus and then refocus over and over to see the outside world and then the HUD data and back again. Instead, the data is just there, in focus as the pilot peers out at the world.

Read “FAA Approves First Small-Plane HUD. How It Happened And What It Means.” to learn more about the safety system. 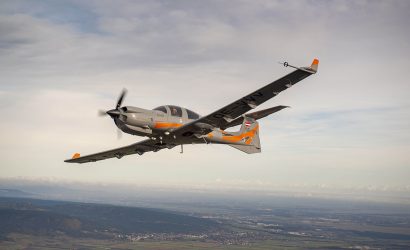