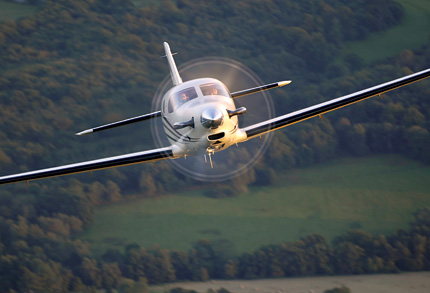 Year in, year out, up economy or down economy, enterprising aviation entrepreneurs always find new and exciting ways to get our juices flowing and our checking accounts draining. Midway through 2010, as the molting U.S. economic picture continues to refeather, a lot of cool new stuff demands our spending attention. Even though purchases of new aircraft and “discretionary” accessories have been in slow flight for the last two years, sales numbers are climbing again as we sail the skies over flying fields nationwide.

At April’s Sun ’n Fun Fly-In, sales of 30 or more LSA were reported. That’s good news for all of GA. More new models—in a field already choked with 106 registered LSA—will debut in the months ahead.

Encouraging signs also include Piper Aircraft’s recent surge of hiring in support of the on-track PiperJet program. Cessna is shipping Skycatchers. The first PiperSport LSA were delivered to new owners—as promised—in April. And Piper continues to revitalize its lower-end GA market with updated models such as the Garmin G600–equipped Archer.

Herewith is our take on 10 exciting new products, from turboprops to avionics goodies to aviation apps for the new Apple iPad. It’s blue-sky flying ahead!

Bird Of Prey
One of the eye-popping, fantasy-stoking showstoppers at Sun ’n Fun was the gorgeous high-speed cruiser Kestrel. If speed (352 knots at 25,000 feet!), beautiful and fluid lines, luxurious cabin comfort for six passengers and turboprop power are high on your shopping list, then the Kestrel from British company Farnborough Aircraft deserves a thorough vetting. This carbon-fiber composite stunner is no slouch in any department. Kestrel can climb at more than 3,100 fpm, travel IFR more than 1,500 miles, carry a useful load of 3,336 pounds and operate up to 31,000 feet.

Although it bears more than a passing resemblance to the defunct kitbuilt Epic LT—Farnborough did the initial aerodynamic design work on the LT—the Kestrel is 27% larger and will be built as a certified airplane, not a kit. Financing is still underway, though, so don’t expect one before 2013. Visit www.farnborough-aircraft.com.

YouTube, Meet Cockpit
If sales numbers are good evidence—and they usually are—pilots yearn for video stardom. The debut of Light Sport Group’s A/V-Ator Edition Contour HD camera system this spring tapped the share-everything zeitgeist of our online culture so well that the company sold out at its first air show!

Light Sport Group markets the inside-/outside-mount camera (economically at the $699 introductory price) as the perfect flight recorder. Think of it as a palm-sized black box—with entertainment chops. The cam records voice along with full-resolution, 1080p, high-definition imagery. In 720p mode, the frame rate can be brought up to 60 fps.

A typical LSA setup behind the pilot and passenger captures—via a 135-degree wide-angle lens—both aviators, the entire instrument panel and everything beyond the windscreen. No wonder flight schools are snapping these up as a great training aid. What better way to study landings, train your ear for ATC communications and have fun documenting all your flights?

The compact and lightweight camera records everything on the included itty-bitty 8 GB microSD card. Visit www.lightsportgroup.com.

The Americanization Of Alto
Start with two aviation veterans with extensive backgrounds in sport aircraft maintenance and marketing. Then fold in an established Czech manufacturer (Direct Fly) and update its popular Euro bird with American components as an S-LSA for the States: introducing the Corbi Air Alto 100.

Dan Coffey’s and Ron Corbi’s approach might be called “pre-emptive” maintenance—they hope to design out the things that tend to fail in LSA. “Our focus with the Alto is to enhance the ‘maintainability’ of the airplane,” says Coffey. “We’ve added things like American-made Matco wheels and brakes, bucked rivets to replace pop rivets in high-stress areas, Vertical Power’s electronic electrical system and the Approach Hub avionics wiring system for plug-and-play component upgrades.”

Another feature: Alto’s canopy slides forward for easy access to the back of the panel. Look for the Globe Swift–like Alto to be ASTM-approved and shipping by year’s end. And the $99,995 price tag includes a Dynon SkyView EFIS panel! Visit www.directfly.cz and www.corbiair.com.


Wired, Not Tired
Electrically wiring an airplane is a complex and challenging task that still uses 80-year-old technology. Why not bring wiring into the digital age? That was Marc Ausman’s question. His answer is the Vertical Power solid-state electrical system.

“Our models do all the switching and circuit protection for power distribution on an aircraft,” says Ausman, Vertical Power’s president. “Comparing our system with electrical wiring is like comparing EFIS to steam gauges. We do much more for the pilot, like run trim and flap systems, the starter system, wig-wag landing lights and avionics.”

The system replaces black boxes, backup busses, trim and flap motor modules and more. “All that stuff goes away. In its place is a solid-state control box and software. Software doesn’t weigh anything. It doesn’t add to system complexity. And we feel it’s a lot more reliable,” explains Ausman.

Already popular with homebuilders, look for Vertical Power to show up in many LSA in the months ahead, including the Corbi Air Alto. Visit www.verticalpower.com.

Touch-Screen Wonder
Another avionics gadget generating major buzz is the iFly 700 from Adventure Pilot. What would you pay for a seven-inch touch-screen-display GPS that overlays course lines, does flight planning and presents vital navigational info—all on top of an official full-color, high-resolution FAA sectional display?

What if it also came loaded with IFR low en route charts? And gave you constantly updated airspeed, track and altitude readouts? Imagine tapping airport icons to see course lines drawn to them, with pop-up menus to choose them as waypoints or destinations, or show you complete AFD airport info. Scroll through the sectional by dragging a fingertip on the display, tap to switch to another sectional and drag a route line to avoid a TFR—so intuitive, so easy in flight.

The software whizbrains behind this wonder have done complex programming for years for companies like Orbitz. The product will mature rapidly with updates and enhancements (rumor: WX coming), and user feedback is enthusiastically sought. Toss in a $69/year subscription for all updates. Now what’s that worth to you? $499? Deal! Visit www.ifly.adventurepilot.com.

Lightspeed “R” Us
Lightspeed Aviation continues to give evidence that it’s more than a purveyor of quality aviation headsets. Sure, the company has won strong support from the market with its pared-down line of headsets. Its flagship Zulu is a top seller. And after discontinuing its midrange models, the company now re-addresses that segment with the new Sierra, a 16-ounce ANR headset with comfortable, plush ear seals and cups, and Bluetooth connectivity with your cell phone and music connection—most of the functions of the pricier Zulu.

But Lightspeed also addresses the human side of the equation. The company offers excellent customer service. Moreover, the Lightspeed Aviation Foundation gives grants of at least $10,000 to several charities that are nominated by customers, and donates up to $50 from every sale to worthy causes. Lightspeed even accepts trade-ins of headsets from competing companies! Visit www.lightspeedaviation.com.

Jet-A-Burning Piston Engine!
You don’t need to be Stephen Hawking to understand the potential benefits here: a piston engine that burns Jet-A fuel, has no magnetos nor spark plugs, is air-cooled, uses a single control lever and burns 9 gph (as an STC’d test Cessna 182 has amply demonstrated since 2006).

Long-term fuel savings will be important: The conversion costs about $55,000 more than a comparable avgas burner replacement. Visit www.smaengines.com.

Plug & Play Avionics
No more expensive, complicated hand wiring of instrument components for you! Approach Systems teamed up with Park Rapids Avionics to create and market the Fast Stack modular wiring system for avionics components. The hubs are showing up in lots of airplanes these days, from GA to LSA to experimental, for both new and retrofit applications.

The system interconnects avionics components with a central plug-in hub through preconstructed cables. Most avionics units out there work with Fast Stack hub models. Which one you choose depends on the components you hook up in your own private flivver.

The Approach Pro-G Wiring System accommodates a Garmin-centric, IFR-loaded panel. The Approach Pro Hub and Cable System works with most avionics, from NAV/GPS/COM and audio panels to HSI, RMI and moving maps.

Custom-built cable harnesses have a DB type connector on one end and the avionics-specific target connector on the other, and are double shielded to avoid electronic ground looping. Visit www.approachfaststack.com.

Flight Guide For The iPad
Flight Guide, the company that makes those indispensable little leather-bound books with fingertip access to tons of aviation information (airport listings, detailed airspace maps, navigational aids and so much more) has ported over its info-jammed guides to the new Apple iPad. The application (“app”) is called Flight Guide iEFB.

The lap-sized, portable, big-view iPad ought to be a perfect fit for gadget-loving pilots, as its touch-screen interface allows quick fingertip navigation to everything Flight Guides are famous for providing. There are three versions: VFR, IFR and PRO. The VFR version includes airport info as well as sectional and terminal area charts. All versions are georeferenced and can be zoomed in, just like on the iPhone, with two-finger pinch/drag interfacing. Very cool!

Similar to the iFly 700 GPS, by touching a specific airport on a sectional, you can call up airport diagrams with taxiways identified, airspace class graphics, NAV and COM frequencies, FBOs, fuel prices, food, lodging—yes, the information superhighway has come to the cockpit.

The app uses between 4 and 6 GB of iPad memory, and data subscriptions range from $9.95 to $19.95 monthly. Visit www.flightguide.com.

The regal Baron has racked up more than 6,700 sales since 1960, an auric success story to be sure. Some of the eye-candy accents of the golden-anniversary edition include 14K gold “Baron” and “50-year” emblems on the power quadrant and both control yokes. Matching leather seats and removable headrest covers carry the Beech shield, and leather-wrapped yokes, velvet carpeting, Rosen visors and top-o’-line Lightspeed Zulu headsets finish the presentation.

But it’s not just aesthetics. The Scimitar props come with unfeathering accumulators to boost performance. Two 300-horse Teledyne Continental IO-550 engines muscle the bird up to 202 knots at 6,000 feet, lifting a useful load of 1,504 pounds. Golden? You bet. Visit www.hawkerbeechcraft.com.