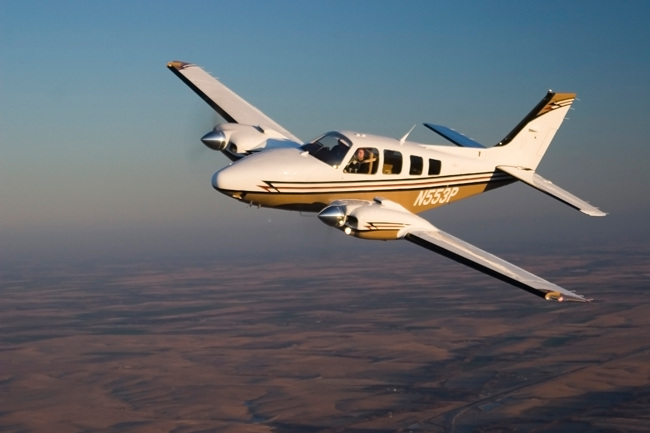 For many pilots, the regal Beech Baron 58 has always represented an ultimate in general aviation. Just as the straight-tail Bonanza was an icon to pilots of single-engine airplanes, the model 58 was often regarded as the peak of the twin-engine pyramid. New, well-equipped 58 Barons cost nearly $1.5 million today, and even a four-year-old example can sell for our $1 million limit.

Barons were built in three flavors: normally aspirated, turbocharged, and pressurized, and like most Beech products, all reflected a build quality and control harmony not seen in many other brands. Standard power on the normal breather was 285/300 hp, per side, stepped up to 310 hp on the turbocharged model and 325 hp on the inflatable version. Like the 36 Bonanza, the 58 Baron mounted a pair of aft right-side doors for access to the rear cabin.

The standard model 58 sported a sea level climb of nearly 1,500 fpm and a max cruise of 200 knots, while the turbo and pressurized models offered the same climb and over 220 knots at 20,000 feet. Fuel capacity was 190 gallons, enough for five hours cruise plus reserve, 4.5 hours on the thirstier P-Baron.

The 58 Baron wasn’t exactly perfect, however. The fuselage was basically that of the 36 Bonanza, and that meant the Baron had the narrowest cross section of any six-place twin, a mere 42 inches at the elbows. (In contrast, Jane’s All the World’s Aircraft reports the allegedly cramped Mooney offers a 43.5-inch-wide cabin.)

Similarly, model 58 Barons built before 1984 featured nonstandard placement of controls for propellers, throttles, gear, and flaps. Beech suggested it was the rest of the industry that was out of step and positioned propeller controls to the far left and throttles at center, an apparent throwback to the days of the old Beech 18, most often flown by two pilots.

Beech had also traditionally mounted the landing gear switch on the right below the power quadrant and the flap switch on the left, exactly the opposite of virtually every other retractable-gear airplane in the industry.

The result for pilots who flew several types of aircraft was inevitable, an inordinately high rate of feathered props during the landing flare and gear-up landings from misidentifying the gear and flap switches.

Beech corrected the problem in 1984 when they certified the P-Baron. It obviously would have been illogical to produce two airplanes of the same model with different positions for the same operating controls.

In 2006, Beech began equipping all Barons with Garmin’s wonder-window, glass-panel G1000 avionics suite and re-designated the airplane the G58. Pneumatic deice was a popular option, making the airplane a reasonable, all-weather machine.

Despite a down market for twins, the G58 has remained in demand. Hawker Beechcraft (now a part of Textron Aviation) sold 40 of the type in 2014, worth about $50 million, so the biggest Baron isn’t liable to go away anytime soon.