Flying is great. By using the flying club Comanche, I could combine a Friday morning business meeting in Philadelphia with a weekend duck hunting trip to Swanton, Vermont, on the Canadian border, something that would have been essentially impossible using the airlines. So, on a rainy September morning, after a checking the Westchester County Airport (HPN) weather (marginal VFR), I filed VFR to Philly. A 7:30 a.m. departure would get me there in good time to make an 11 a.m. advertising presentation. Then, after a client lunch, I would be back in the air headed to Vermont by 3 p.m.

As soon as I crossed the Hudson River into New Jersey, the ceiling started to drop until it hit 300 feet with less than a mile of rainy visibility. I was losing my VOR navigation signals (this was before GPS) and was starting to get that “this is not going well” feeling. 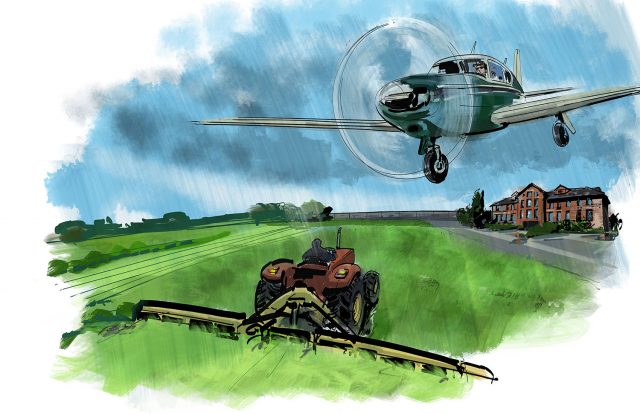 I was just about to reverse course and return to HPN when a 1,500-foot freshly mowed field suddenly appeared right in front of me. So, rather than risk hitting one of the many 900-foot TV towers I had just flown past at 300 feet, I decided to land. The landing was tricky since the man on the tractor mowing the field was not quite finished. He could not hear me due to the noise created by the gang of a dozen mowers he was pulling. He also did not see me from under his rain hood as he was focused on the cutting pattern he was creating. I had to keep circling the field until I could set up a short final to clear the 10-foot wall on the downwind end just as the mower was making his turn inside the wall at the upwind end of the field. Of course, I knew I would surprise him as I touched down and he turned to face a 6-foot spinning prop attached to a fast-moving airplane coming right at him. Fortunately, in addition to landing into a pretty brisk wind, I was landing slightly uphill on wet grass, and so we both stopped a good 50 or 60 yards apart!

I thought that was the end of the drama and when I saw him get on his handheld radio. Now, there were no cell phones back then either, but why did he have a radio? Dismissing that oddity, I thought “Great! He is already calling for help. Maybe he thinks I’m out of gas.”

A security car arrived in minutes, and an armed guard got out and immediately asked, “How long have you been flying?” I looked at my watch and said, “Oh, only about 45 minutes, and then I ran into this bad weather.”

“No! I mean how much time have you logged as a pilot? There is an airport 2 miles from here, and you just landed in a state prison yard! This is the New Jersey Neuro-Psychiatric Institute,” he exclaimed. “Sorry, I am just trying to get to a business meeting in Philly,” I replied as I pulled my advertising portfolio case out of the cockpit.

“I need to look in the duffle bag you have in the backseat—and is that a gun case you have strapped in next to it?” he said, looking in the backseat with one hand on his sidearm.

“Yes, well, you see, after the meeting, I am flying to Vermont to go duck hunting and, yes, that is a 12-gauge shotgun, and the ammo and camo rain gear is for the hunt,” I explained as I opened the duffle.

“If you could just call me a cab, I can get to my meeting in Philly, and then I’ll come back this afternoon and fly this plane out of your yard—I’m sure the weather will have improved by then.”

The officer did call me a cab after recording all my ID info and taking lots of photos. He also insisted that I call the New Jersey Department of Transportation (NJDOT) to report my transgression and get permission to fly a plane out of a state prison yard. He thought for sure they would make me take the wings off and truck it to the nearby airport.

After an expensive, one-hour cab ride to Philly, I had just enough time before my meeting to call NJDOT. Of course, they already knew all about my prison yard landing and, after confirming my limited private time (less than 150 hours), they insisted that I hire a commercial pilot to fly the Comanche two miles to the nearby airport. In fact, the officer I spoke to had already lined up a commercial pilot (also his brother-in-law) to meet me at the prison later in the day—but much better than taking the wings off and trucking it over.

So, after a client lunch during which I listened to lots of advice about the virtues of Amtrak vs. small plane travel and ribbing about my piloting skills, I got one of the more sympathetic clients to give me a ride back to the prison yard.

After watching the commercial pilot fly the Comanche off the grass and over the trees, we drove the two miles to the Princeton airport (of course, it was clearly marked on my sectional chart that I must have been too busy to look at—what with watching for TV towers and trying to take advantage of my “good luck” spotting a freshly cut field to land in). I paid the commercial pilot his $200 fee, topped off the tanks and was in the air heading for Vermont within the hour.

I spent most of the flight to Swanton reliving my morning flight and comparing it to the safety and comfort of Amtrak. Should I take the train next time? “Start working on an instrument rating” was my answer!

I also spent some time trying to decide whether to enter the unscheduled stop in the Comanche’s logbook as A precautionary weather-related landing at the New Jersey Neuro-Psychiatric Institute for all the other club members to read or not. That’s the way it appears in my pilot’s logbook, but in the end, I decided to enter “HPN to Princeton, NJ, Airport to Swanton, VT, Airport” in the Comanche’s log book.

In the weeks that followed, I thought a lot about VFR flight planning and the importance of penciling alternate routes and possible emergency stopping places along the route on sectional charts. As I continued to fly VFR in marginal weather, I was able to make much better decisions and make them sooner about when to reverse/alter course or land safely, albeit not at my originally intended destination. I never did pursue an instrument rating.

Instead, I continued to fly with carefully marked sectional charts even as GPS and satellite weather streamed to an iPad became more prevalent. During all those years, I diverted to an alternate airport any number of times, but luckily I never had to set it down on a freshly mowed field again, and certainly not one within the walls of a state prison.

Have you had a close call or a cool aviation experience that left a lasting impression? Share your story in our Lessons Learned About Flying Essay Contest today.