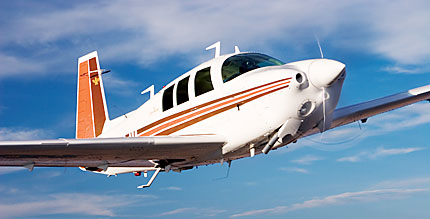 Okay, I admit it. I was a hot-rodder as a kid. Shortly after I was old enough to drive, a buddy and I began campaigning an old Ford on the second-gear, stock-car circuit around Anchorage and Fairbanks, Alaska. Later, I raced a Triumph TR3B and an Austin Healey 3000 in Sports Car Club of America gymkhana events around New Mexico. I didn’t win very often, but I had great fun in the process (until I realized how much money it was costing me).

We performed various tricks to improve horsepower and speed on all three cars, occasionally porting, polishing and relieving and fitting tuned exhaust systems. Tuned exhausts were well established in hot rodding as a relatively easy method of adding power.

Adapting a tuned exhaust system to an airplane is theoretically an easy process, though FAA certification can complicate anything. Aeronautical engineer Robin Thomas of St. Thomas, Virgin Islands, first fought the STC wars with the FAA about laminar flow speed mods for Cherokees. In the mid ’90s, Thomas came up with the concept of Power Flow Systems after relocating to Daytona Beach, Fla.

In 1999, the engineer applied his exhaustive ideas to airplanes powered by the 150/160 hp Lycoming O-320, one of the most popular and durable engines in the business. The aircraft models included a variety of Piper Cherokees and Cessna Skyhawks, plus the Grumman American Traveler and Cheetah. He later expanded his development efforts to the 180 hp Lycoming O-360 and 200 hp Lycoming IO-360, engines installed on Grumman Tigers, Cessna Cardinals and virtually all Mooneys built through 1975.

There’s nothing magical about “tuning” an exhaust system. The concept isn’t that difficult to understand. Most conventional aircraft engines operate on a four-stroke cycle: intake, compression, power and exhaust. In this case, only the last stroke is of concern.

In a perfect exhaust system, the engine should evacuate nearly all burned gases from each cylinder immediately after the power stroke. Unfortunately, most exhaust systems aren’t very efficient at scavenging the byproducts of combustion. When the engine attempts to expel the exhaust after the power stroke, the spent gases have four possible routes. They can either follow the ideal path—out the exhaust pipe—or they can try to back up into the other three cylinders. Any backpressure is obviously counterproductive.

Most standard exhaust systems leave behind as much as 20% of those gases. There are two consequences to this. First, if burned gases remain in the cylinder when the engine starts back through the cycle on its intake stroke, there’s less room for the new mixture. Second, by definition, the preburned gases won’t ignite and burn very well the next time around, which results in a loss of power.

A tuned exhaust typically utilizes similar lengths of exhaust stack to produce a negative pressure or vacuum at the exhaust valve rather than a positive pressure or backpressure. This effectively sucks the exhaust from each cylinder following the power stroke. The Power Flow System (PFS) employs a header pipe for each cylinder that joins together in a 4/1 collector. Each primary or header pipe’s length is adjusted to create a slight vacuum designed to evacuate the majority of spent gases from each cylinder. Exhaust gases aren’t only pushed out by the exhaust stroke of the cylinder, but also sucked out by the negative pressure of the tuned header pipe. This allows each cylinder to accept as much as a 95% pure fuel/air mixture for the next intake stroke, resulting in more power.

To verify the fruits of his research, Thomas tested a Power Flow-equipped 160 hp Lycoming O-320 on a dynamometer at Lycon Aircraft Engines in Visalia, Calif. “We ran the engine at full power with both the stock and Power Flow exhausts,” says Thomas, “and Lycon’s dyno revealed the engine was developing 133 hp with the stock exhaust and 157 hp with the Power Flow, an extra 24 hp.”

Thomas optimized the first Power Flow products for relatively low altitudes, appropriate to typical Skyhawk and Cherokee missions. “On engines with fixed-pitch props, we’ve had reports of power increases of 75 rpm,” Howard explains. Years ago, I flew a before-and-after test of a Power Flow-equipped Cherokee 140 and saw a four-knot improvement in cruise. Owners of the 172 Skyhawk also report similar results.

Power Flow products are currently certified on eight major aircraft models, and some 1,900 systems have been installed in the last half-dozen years. The latest of these are the 180 hp and 200 hp Mooneys. Roughly 100 systems are in service on the carbureted, 180 hp Mooney M20A/B/C/D/G models and another 40 Power Flow mods have been
installed on the injected, 200 hp Mooney M20E/J airplanes.

Since I own a Mooney M20F, I was especially interested in the benefits of a tuned exhaust for the 200 hp Mooneys. The best way to evaluate the advantages of a PFS is to fly an accurate before-and-after comparison, and that’s exactly what I did on the last day of August with Darren Tillman, Power Flow’s general manager. I was in Florida with my Mooney Executive to work on several stories and stopped by Daytona Beach to see the evidence for myself.

Before we flew, Tillman explained that Cherokee and Skyhawk pilots fly one way; Mooney pilots fly another way. “We asked Mooney owners how they operate their airplanes,” Tillman explained, “and we learned that many choose fairly high cruise altitude. The Mooney wing seems to do its best work above 8,000 feet, and climb holds up well enough that many Mooney pilots prefer to cruise at 9,500 feet or higher on any flight over about 200 nm.

“For that reason, we optimized the Mooney PFS for 2,600 rpm and 11,500 feet,” Tillman explained. “We believe there are plenty of tangible benefits at lower altitudes, as well, but the system is most efficient at tall heights and lean mixtures.”

To help quantify the differences, we mounted up early in the morning with the standard exhaust in place to fly the “before” portion of Power Flow’s standard profile. This was my first opportunity to see for myself the performance improvements that are possible with Power Flow’s tuned exhaust.

Tillman’s performance profile includes a timed climb from 1,000 to 11,500 feet, plus cruise checks at 2,500, 7,500 and 11,500 feet. We departed Daytona and made our climb check out over the Atlantic, then recorded cruise numbers with throttle and prop against the wall and with prop at 2,500 rpm at all three heights. After 1.5 hours of tests, we landed back at Daytona, filled the tanks, swapped out exhaust systems to the Power Flow and repeated the tests two hours later. Despite the fact that it was late summer, temperatures at altitude hadn’t changed more than a degree or two for the second tests, though the sky was beginning to muscle up with cumulus clouds.

At the conclusion of the flights, there was no question that the PFS had improved both climb and cruise performance. Specifically, I saw an overall climb improvement of about 50 fpm on the long climb from 1,000 to 11,500 feet. Our ascent required 17 minutes and 30 seconds for an average of 600 fpm. The comparison suggested the difference in climb performance was most pronounced above 8,000 feet, as the difference in rate was the greatest up high. Power Flow may do its best work improving power at high altitudes.

Like most pilots, I was primarily interested in cruise benefits. Since few pilots fly full throttle at 2,500 feet, cruise results were most revealing at the two higher altitudes. At 7,500 feet, I saw indicated airspeeds at full throttle and 2,700 rpm and 2,500 rpm increase by two and three knots, respectively. Of equal significance, the PFS allowed leaning to 0.5 gph lower fuel flow. My best cruise at 7,500 feet was 157 knots, up from 154 knots with the standard exhaust.

Per Tillman’s promise, the best speed improvement came at 11,500 feet using full throttle, 2,500 rpm and peak EGT. The standard exhaust yielded 114 KIAS, whereas the PFS delivered 119 KIAS. As with climb performance, the PFS seems to deliver its greatest advantage at high-altitude and lean-mixture settings. At 11,500 feet, my airplane’s true airspeed improved from 140 to 145 knots.

Depending on where you fly, a peripheral benefit of the Power Flow exhaust is cooler engine-operating temperatures. At 2,500 feet, my Mooney’s oil temp was nine degrees cooler; at 7,500 feet, it was five degrees lower. Cylinder head temps were also reduced by an average of five degrees with the PFS exhaust installed.

It’s important to note this is an isolated test on one airplane, but it’s representative of the improvement you might expect from a typical Mooney Chaparral or Executive. If you fly a 201, you’ll see comparable increases in climb and cruise, again with increasing benefits at high altitudes. (In fact, with the help of the Power Flow exhaust, some 201s may actually bust 200 mph.) Power Flow’s company traveling machine is a 1977 Mooney 201, and Tillman has extensive experience with the system on that airplane.

The price for the Power Flow exhaust system on any of the 200 hp Mooneys is $4,590, and if you fly a 180 hp M20B/C/D or G, you’ll pay $4,190 for a PFS-tuned exhaust. Add $200 on either model if you want the uninstalled ceramic-coated pipe, strictly a cosmetic option. Installation on most airplanes is relatively simple, usually no more than five hours, as this is pretty much a remove-and-replace, bolt-on conversion. If you’re in the Daytona Beach area, Power Flow’s mechanics can make the swap even quicker.

Thomas and Tillman are so confident in their products that they offer something unusual in general aviation, a money-back guarantee. “If you’re not happy with the system within the first 60 days,” says Tillman, “return it to us and we’ll refund your purchase price.”

There’s a natural skepticism about the value of aircraft mods, but Diamond Aircraft recently validated the Power Flow Exhaust by selecting it as the upgrade on the improved Diamond DA-40XL.

For Mooney lovers, the system works well on my ’69 Executive. The benefits are very real, and there’s little question the system delivers pretty much what Robin Thomas and Darren Tillman say it does.