As a flight test engineer for the Boeing Company assigned to Wichita, Kans. (“the Air Capital”), I’m among the fortunate people who truly love their work. And as the lead FTE on the KC-767 international tanker program, my usual perch is in the first observer seat of the KC-767 (the most advanced tanker in service). From that seat, I work with some of the world’s most talented flight testers, engineers and maintainers.

Little did I know that, this time, I’d end up in the rear seat of a TA-4 Skyhawk. To achieve our flight test goals, Boeing had partnered with Advanced Training Systems International (ATSI), which specializes in fighter flight training, tactical air training, flight-testing and flying chase. ATSI operates 10 A-4s equipped with probe-and-drogue refueling systems.

My first flight was with Vinny Newstrom—a retired Navy lieutenant commander and, at the time, ATSI’s chief pilot—in N250WL, a 1968 McDonnell Douglas TA-4J Skyhawk. Climbing into this aircraft takes a little stretch—grab the canopy hydraulic cylinder with your right hand, swing your left leg over and in, get onto the seat, then step in with your other leg and shimmy down. Harnessing up feels as though you’re strapping the jet to your back instead of strapping into the jet.

The canopy rails were set right to the mid-bicep, with the seat height I like. My shoulders were touching both rails, which meant that whenever the canopy was coming down, I had to pull my shoulders together. Four more inches outboard were the inlets to the J52 engine, and with the canopy open, anything loose in the rear seat became an ingestion hazard, so everything was strapped down (on a kneeboard or in a pocket). Visibility was exceptional, and noise wasn’t excessive, but you couldn’t use VOX effectively until the canopy was closed. 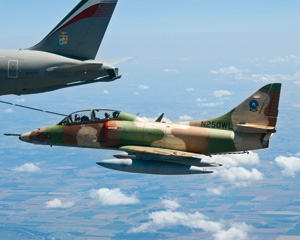 The instrumentation system I was there to operate was controlled via a panel on the lower right side. A complex array of hand signals and checks borne from carrier operations ensured the readiness of the airplane and the safety of the ground crew. After completing engine start, COM and flight checks, clearance and the taxi checklist, we were rolling out of our parking spot.
Advertisement

McConnell AFB has parallel runways, and the de rigueur departure is a simultaneous takeoff. Power came up, the airplane leapt forward, and at about 160 KIAS, we were airborne and climbing. Gear and flap retraction came quickly, and then we were joining up on the wing of the tanker. (Later, a third aircraft, from Cessna Flight Test, joined us and provided photo-chase support.)

There’s nothing like flying formation in a big airplane. The A-4’s stick forces are light, and the airplane is very responsive and has nice control harmony. At faster speeds, it can become more pitch sensitive—your gains have to be dialed down, and you resort to “stirring the pot” for formation and level flight. Throttle response has a slight delay, but nothing objectionable.

For a moment, I imagined what it might have been like to be a Vietnam-era aviator flying the “Scooter” off the deck of a ship and into harm’s way. There wasn’t much time for sightseeing during the test points—I was there to fulfill certain duties and those kept me busy. On the way home, though, there was some time to play, and Vinny didn’t disappoint—though the brief interlude of aerobatics only served to whet my appetite for more!

Streaking across the plains of Kansas, I learned a lot about the TA-4, such as the technique for smoothly getting the slats to extend when maneuvering, and the sound of the drop tanks running dry. Around to base, with gear and flaps down, Vinny touched down right on target, and the Skyhawk grudgingly coasted to a beautiful landing. Approach speed was about 150 knots—much slower and a lighter touchdown than I had expected based on Vinny’s and the A-4’s carrier-landing heritage (no offense, Vinny).

Since that time, I’ve had the pleasure of flying another 10 or so times with ATSI. Pilots such as Gov, Corky and Muff all exemplify ATSI’s high standards. I’ve had an opportunity to hone my formation flying skills, perform more aerobatics and generally score major cool points around the office and the Air Capital!