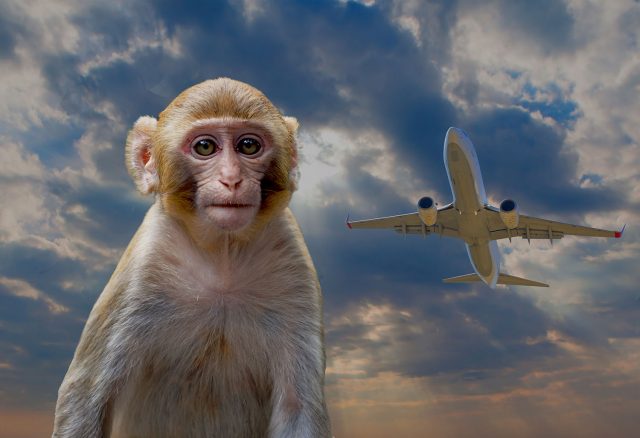 Like many of you, we’ve found ourselves in these challenging times looking for a bit of lightheartedness. We have found some. And, yes, it’s monkey related.

Primates have begun to invade Fort Lauderdale Airport (FLL), making their way onto the ramp and scaling terminal buildings, according to photographic evidence we found online.

How did this happen? It’s a story we can’t believe we hadn’t heard before, southeastern Florida coast history enthusiast Bill Sabelsak clued us in, and you won’t believe how crazy it all is.

Around 75 years ago a Tarzan film starring swimming legend-turned-movie star Johnny Weissmuller and Irish American actor Maureen O’Sullivan was filmed near Ft. Lauderdale. A Tarzan film needs monkeys, so the film’s producers imported them, five couples, in fact. After the filming was over, a local tour guide “stranded” them on an island just off the coast, not realizing they could swim, apparently. Well, they could and did, all the way to shore. Today there are more than 1,000 macaques in Florida, with at least a handful of them at the airport.

Exactly how they have come to inhabit the airport environs is not known, but it is thought to have happened only recently. One theory has it that the pandemic has kept people inside so much the monkeys have taken the cue to expand their habitat into formerly busy places, like FLL.

While they are definitely an odd sight for those of us not used to seeing American monkeys, they are not as much fun as the old barrel-of-monkeys metaphor makes them out to be. They are wild animals and carry some nasty diseases. Give them a wide berth and listen carefully to the ATIS for reports of monkey incursions.