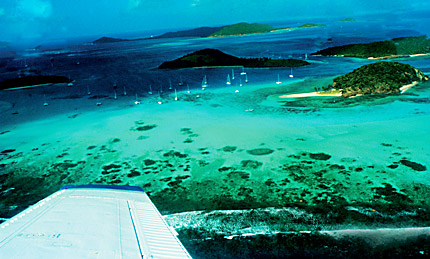 Ladies and gentlemen, I am happy to inform you that in this river, there are no cocodrilos,” our guide smiled as he related the information to us. Just hearing the word made our adventure more exciting. Cocodrilos (a.k.a. crocodiles)—I said it over and over again, letting the syllables twist back and forth between the tip of my tongue and the roof of my mouth. “KO KO DREE YOSE,” I repeated, trying to perfect that Spanish rolling “r” that eludes most gringos. “There are, however, many jaguars,” the guide added.

There were more than a dozen of us hunkered down in a long, dugout canoe, dodging spray from the occasional rapids, working our way upriver to Angel Falls, the tallest waterfall in the world. The group had started out from Florida a week or so earlier, hopscotching south toward the equator along the chain of Caribbean islands to where we were now, the rain forests of Venezuela. How did all these American pilots and airplanes end up so far from home on this grandest of all intercontinental flights? Easy. The answer is Air Journey.

Thierry Pouille and his wife, Sophie, left a two-decade career in the travel business to launch Air Journey, a company that specializes in arranging and escorting general aviation pilots on dream-of-a-lifetime group trips. Their portfolio of destinations includes just about any place that’s accessible by small general aviation airplanes, and many places that are only accessible by small airplanes. Pouille and his Beechcraft Baron lead pilots all over the Caribbean, Central and South America and even across the Atlantic via Greenland and Iceland to visit Europe.

“The fun of it is that I’m always trying to figure out where we want to go next; where is it that’s even more beautiful, more exciting; where is it that nobody has discovered yet,” Pouille says with a contagious grin. This trip to Angel Falls is his first, and he’s busy taking digital pictures that each group member will get on disc after the trip is over.

Within much of the aviation community, the Pouilles and Air Journey have become somewhat of a legend. Their customer base is worldwide, and many of their clients return again and again. They know that Pouille has done plenty of homework in preparation for the adventure and will be with them every step of the way, so there’s little left for them to do but enjoy flying.

Though just about every pilot will tell you that the idea of flying his or her airplane into a foreign country is an exciting idea, many will also admit to some level of apprehension about doing so, at least by themselves. Common concerns are ignorance about customs and immigration procedures, required paperwork, talking to air traffic controllers and getting lost or stuck someplace without fuel. Pouille starts all of his trips with a thorough pretrip briefing in Florida, and hands everyone an incredibly well-organized and complete binder of charts and information. Best of all, he’s going to be there with them, holding their hands, so to speak, and leading them through the process at each and every destination.

“This is a great reconnaissance mission for me,” says Roger Peek who has flown in from France to join this Air Journey expedition. “After this, I’ll be comfortable enough to come back here and do this on my own.”

And he’s probably right. In reality, there are only minor adjustments for each pilot to get used to while flying in the Caribbean and South America. All of the controllers along the route speak English, though some of the aviation terminology is a bit different. For example, if the tower asks you to “line up and wait,” then you’re being asked to taxi into position and hold. Barometric pressure is often reported as QNH, in millibars rather than inches of mercury. Navigational charts for the Caribbean and South America are comparatively huge, large enough to be considered a ranchette in Wyoming or Montana. Opening one up in a small general aviation cockpit to locate your position can turn into a Keystone Cops moment. But that’s why God made GPS, and Thierry’s preflight planning provides the group with waypoints and lat/long numbers for any location they might need to navigate.

Since our group will be flying over lots of ocean along the way, Pouille even has a predeparture life-raft/life-saving demonstration conducted by Randy Boone, former senior chief of the Coast Guard. Everyone in the group gets a fanny pack with his or her name monogrammed onto the side. Inside is just about anything and everything you might need should you make an unexpected stop over water.

Then it’s show time. The next morning, the group launches out of Florida and Air Journey’s elaborate planning and preparation begins to reveal itself.

“He’s just amazing,” says Bob Blettner, who, with wife Jill, is a repeat customer. “You can’t tell Thierry is doing anything, but he’s really doing everything. That’s what makes him a real pro!”

But behind the scenes, and along every step of the way, Pouille is an octopus, wielding a satellite phone, a cell phone and an ISP Internet phone loaded onto his laptop. While his guests are scuba diving, sailing or sightseeing, Thierry is calling ahead to confirm fuel availability at the next day’s destination, chatting with the owner of a resort where the group will be staying at the week’s end, then arranging customs and so on. In some places, he’s even hired a facilitator to meet the group upon arrival and expedite paperwork and refueling. Pouille is constantly checking the weather and may choose to amend the group’s flight plan to keep the trip VFR. The flight-planning software on his laptop creates a new route, he prints it from his portable printer, and by dinner that night, the group’s flight briefing includes the route changes. Back at Air Journey’s headquarters in West Palm Beach, Fla., wife Sophie is on the phone arranging any changes in lodging and entertainment to match the group’s new itinerary. The only thing that’s left for the group is to continue doing what they came for—having fun.

“Thierry just does a fantastic job,” says Dianne Jones and husband Jim, both of whom are repeat customers.

For example, during this trip, seven airplanes took off from the island of Grenada en route to Venezuela. Unforecast weather forced five of the airplanes to turn around, but two of Thierry’s group went low under the overcast and made their way into South America. Suddenly, Air Journey had splintered into two groups, one already in Venezuela and the other waiting out the weather back in the Caribbean. Thierry was immediately on the satellite phone speaking with the guests who had already arrived in Canaima, Venezuela.

“We just flew underneath the weather, and it was a piece of cake. This is the kind of weather we’re used to back home,” says Howard Nugent who flew a Cessna 185 from Wasilla, Alaska, with wife Ann to join up with Air Journey.

“It really was no big deal when we found out the rest of group wasn’t coming,” says Arlene Stoppe. “We just went ahead and had a great time; everything was already arranged, and our guides were expecting us.” She and her husband Don had flown their Seneca from New Hampshire, the second time they’d joined an Air Journey adventure. “Thierry was checking on us all the way.”

Thierry and Sophie went right to work, and everything proceeded without a hitch. They managed both groups simultaneously, and everyone got to do and see everything that was originally offered. While all of this was happening, Sophie was also managing another Air Journey group, which was touring the Bahamas. All in a day’s work for the Pouilles.

When the two factions of the original group eventually rejoined, it felt like a family reunion, except it was a family of former strangers. There were only a few days remaining, and without prompting, the group was already making plans to stay in touch. Many talked about scheduling some kind of rendezvous or meeting on another Air Journey trip. There was no evidence that all were strangers ten days earlier, and I must confess there was a kind of kinship that seemed impossible to escape. One group member told me, “The thing I like most about aviation is that it brings out the best in everyone. That’s why I love to go on these trips with Thierry.”

Tim Hayes, a student pilot who rode along just to see whether flying was something he wanted to continue pursuing said it all. “If I wasn’t an aviation enthusiast before, I am now! This is really, really cool.”

By the end, the group had flown more than a thousand miles together. They’d played with monkeys, gone sailing, hiked, walked deserted beaches, sampled local cuisine, snorkeled, toured museums and shops, seen a dozen Caribbean islands and stood together at the base of the tallest waterfall in the world. These are the kind of memories that only get better with age. And no one seemed to care that there were no cocodrilos.

For more information and a schedule of Air Journey excursions, visit the Website, www.airjourney.com.