By the time you read this, I will have completed a two-week vacation trip circumnavigating most of Alaska and some of Western Siberia with an Indiana dentist, Dr. Bill Grider. (Hey, it’s a tough job, but…) Alaska is my kind of place, and despite a dozen trips around the state, I’m always eager to return. 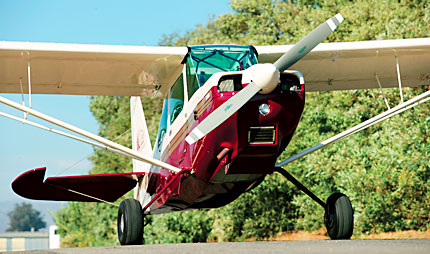 In fact, Alaska was home in the last century when I attended Anchorage High School and the University of Alaska. In addition to attending school as little as possible, I did lots of typical kid stuff—forest fire fighting, radio announcing, construction work, truck driving and some other things I would just as soon not admit to. I also logged my first observer hours in an airplane, a truly rat-bag Civil Air Patrol (CAP) Super Cub named (why do people name their airplanes?) Slow Poke. Despite the numerous air leaks that made winter flying a challenge, the Cub was pure airplane: stick, rudders and throttle, no ups, no extras (and not much heat).

The Anchorage CAP squadron also had a Champion 7EC on its line, and I was granted backseat privileges in that taildragger as well. With only 90 hp out front, the Champ wasn’t as enthusiastic as the Cub, but it was still loads of fun, a reasonable off-airport machine with performance that seemed to defy its minimal horsepower.

Champions have gone through a number of iterations since then, and the company line has expanded and improved. Bellanca purchased Champion in the early 1970s and developed the model 8, a symmetrical-wing airplane that would eventually adopt more horsepower and morph from a simple, easy-handling, short-field performer to a talented, advanced aerobatic trainer.

Thirty years on, Jerry Mehlhaff, current owner of the Champion line [now renamed American Champion Aircraft Corporation (ACAC) and based in Rochester, Wis.], has come out with a third-generation improvement on the basic Champ, dedicated to backwoods operation and certified last June as the company’s latest model, the High Country Explorer. Like all of Mehlhaff’s previous models since he purchased the company in 1992, the new 7GCBC incorporates a metal-wing structure rather than the older wooden spars. The latter was sometimes subject to cracks, and Mehlhaff’s aluminum spars obviously eliminated those problems on new airplanes. (More than coincidentally, the metal-wing structure also imparts a higher gross weight, 1,800 pounds versus 1,650 pounds on the wood-wing Citabrias.)

The new model sports exactly double the horsepower of the original, along with enough other improvements to put it several steps ahead of almost everything else in the ACAC line except the Super Decathlon. Mehlhaff feels that the High Country Explorer fills the gap between ACAC’s standard 160 hp Explorer and the 180 hp Scout.

Doug Dullenkopf of Screaming Eagle Aviation in Santa Paula, Calif., is our resident ACAC dealer. Dullenkopf has been selling Champion products since 1972, right after the type became Bellancas, so he knows more about the Champion line than anyone else I can think of.

It was no big surprise that Dullenkopf had dibs on the first of the High Country Explorers, and he invited me up for a day of fun and games in the new model shortly after its delivery in July. The standard, tandem-seating configuration used on all ACAC airplanes means that there’s plenty of room for practically anyone. Head and leg space is copious, and elbow room is plentiful since you’re not sharing the seat with anyone. While it’s true that the tandem arrangement means less horizontal panel space, the airplane still can be certified IFR and carry full gyros, a transponder and a Garmin VHF and GPS. ACAC even installs a radio master in recognition of possible multiple radios.

The new model 7GCBC combines existing components of ACAC airplanes plus a few new tricks, making this a slightly different machine from anything else in the company line. The wing is essentially the standard semi-Hershey-bar model-7 airfoil rather than the model 8’s symmetrical section. The landing gear is basically the same as the Citabria’s, except it’s now made of aluminum, reconfigured to stand an inch taller. The gear also now encloses the brake line, instead of clamping it to the trailing edge of the leg. Not insignificantly, the use of aluminum reduces the weight by about 13 pounds.

Considering that this is intended primarily as a recreational or working, off-airport machine, the new Explorer utilizes the Scout’s oversized 8.00×6-inch tires, and the result is probably two feet of prop clearance in the three-point attitude, 18 inches in the wheel attitude. Provisions are available to mount floats, skis or huge bush tires. Even in standard trim, there’s no way you’ll ding this prop unless you put the airplane onto its back.
Advertisement

The High Country Explorer also incorporates a premium version of essentially the same carbureted 360-cubic-inch Lycoming engine used on the Scout, along with the aforementioned 76-inch, fixed-pitch, Sensenich propeller. The new Explorer’s powerplant is a Superior Vantage Engine, built to considerably higher standards than the normal mill and the first OEM application of the Vantage engine.

The Superior engine features several parts upgrades, a computer-optimized camshaft, better lubrication and even a cowl flap. In addition to the approval for standard 100 octane, Superior certified the Vantage Lycoming for 91-octane auto fuel, a feature that may become more significant as avgas becomes progressively more expensive and harder to find.

You could legally refuel an American Champion High Country Explorer from five-gallon cans topped off at the local Chevron station. When operating in the boonies, that may be the only source of fuel as well as a relatively inexpensive one at that. (I was in Greenland in mid-July, and 100-octane avgas has already reached $10.50 per gallon in Narsarsuaq. Last October, I ferried a Shrike Commander through Christmas Island, 1,200 miles south of Hawaii in the Pacific, and fuel over there was over $11 per gallon with a minimum of a 55-gallon purchase.)

Unlike the utility-category Scout, the new airplane is still basically a Citabria with aerobatic certification to G limits of +5 and -2, evidenced by the shovel-like spades mounted to the ailerons. Spades are a kind of aerodynamic, poor man’s power steering that help deflect one aileron up and the other down when the pilot initiates any roll deflection. Roll rate isn’t as quick as ACAC’s model 8, but the additional roll power imparted by spades makes the High Country Explorer unusually agile for a bush bird. The engine isn’t injected, and there’s no inverted oil system, so you can’t maintain inverted flight as you can in the Super Decathlon, but that’s not the Explorer’s primary mission.

With a max gross weight of 1,800 pounds and a typical empty weight of 1,250 pounds, the Explorer sports a full-fuel payload of about 300 pounds. In other words, you’ll need to download fuel to carry two, full-sized people. Fortunately, that’s not much of a problem, considering that most Explorer stage lengths are probably less than 200 miles. When passenger load will allow, baggage capacity is 100 pounds behind the rear seat, and good news, the baggage is accessible via its own door. You no longer need to load baggage through the right front door and over the backseat.

Takeoff performance with 180 hp motivating only 1,800 pounds of airplane is predictably exhilarating. ACAC lists the airplane’s takeoff runway requirement as 370 feet and initial climb at 1,350 fpm. That will beat a Top Cub off the ground at gross weight, and it’s better than practically anything else in the industry, except perhaps a Maule or Helio.

Once you’re up and away, you can’t help but notice the airplane’s uncommon visibility. The tall windshield wraps back above the pilot, and the low panel further improves the view forward. Generous side windows also open up visibility in practically every direction, and the tandem configuration means that you can see as easily to the right as the left. During the air-to-air session that produced the photos on these pages, I had the benefit of looking straight up through two overhead windows, providing my photographer with some unusual angles.

The best cruise comes at 80% power (remember, this is a Vantage engine), and if you must, you can climb to 7,500 feet to see max cruise of 117 knots. That’s not bad, considering that the Explorer has wheels, struts, braces, spades and other drag producers hanging in the breeze. Cruise at 7,500 feet defies the nature of the High Country Explorer, however. You may find that you’re happier noodling along at 2,000 feet AGL than a mile or more up.

With 35 gallons of fuel on board, max endurance is about 2.5 hours plus reserve, so the range is just under 300 nm at max cruise. If there’s a need to fly high, the new Explorer can loft to 17,000 feet, but that’s hard to imagine in an airplane that’s most at home in the low-and-slow environment, close to the ground.

Advertisement
In-flight maneuverability falls somewhere between that of the Citabria and Decathlon. If you’re inclined to try some acro, the High Country Explorer is more than willing, and it’s approved for most of the standard inside maneuvers, except snap rolls.

You don’t need to fly vertical or inverted tricks to appreciate the airplane’s easy handling, however. In the traffic pattern, you can fly approaches as slow as 50 knots if there’s a need without any of that verge-of-destruction feeling. Full-flap stall speed is only 40 knots, partially a function of the airplane’s Micro Aerodynamics Vortex generators, and stall characteristics are so benign that you would have to be asleep not to notice them.

With a low no-fly velocity, it shouldn’t come as a surprise that it can plunk onto the runway and grind to a stop in less than 400 feet. The improved 7GCBC is one machine that can take off and land in about the same distance.

The base price is $114,900, but that doesn’t include everything. Add IFR provisions, appropriate radios, an intercom and an engine analyzer, and you’ll be approaching $130,000. Remember, the High Country Explorer is an airplane dedicated to the premise that getting there is half the fun, especially when you throw in a loop along the way.