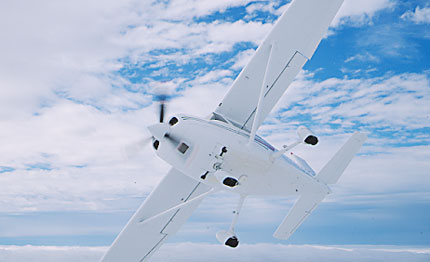 It was over so fast, it was almost as if it hadn’t happened. And, of course, fortunately for everyone, it hadn’t. It was only a blur in my peripheral vision, so fleeting that I wasn’t really sure it was there. It may have been a Seneca or Twin Comanche, angling in from my 10 o’clock. The airplane was slightly below me, and I had one of those terrifying, stop-action glimpses of two people in the cockpit, the pilot looking down at his instruments and the right-seater staring at him.

I felt the jolt of its wake as it passed under me, almost like rolling across a speed bump. I stared idiotically at where it had been for a few seconds, not sure what to do next. There hadn’t even been time to flinch. Then, I turned to my right to see if it was true.

It was. A Piper Seneca was angling smoothly away behind my Mooney’s right wing at five o’clock, its pilots apparently oblivious to their near brush with eternity. I would just as soon have shared their ignorance.

If you fly in congested airspace, and perhaps even if you don’t, midair collisions are an ever-present threat. Okay, so you may not need to worry much about midairs over Tucumcari, New Mexico or Newton, Kansas, but in many other locations, the so-called Big Sky can easily become crowded with a high concentration of air traffic.

For better or worse, I live in Southern California, the busiest airspace in the world for most of the year. (The EAA AirVenture is busier for a few days annually.) Fly around the Los Angeles Basin long enough, and you’re almost bound to have a closer encounter with another airplane than you’d like.

Electronic help has been available for a while, if at a price. I began using a Ryan TCAD a dozen years ago, and today, I also employ a Garmin 330 mode-S transponder with TIS uplink to a Garmin 430. This provides me with essentially the same traffic information available to controllers. Until you’ve used a system such as TIS or Skywatch, you can’t truly appreciate its talents. The TIS provides me with cues on spotting airplanes I’d never see otherwise.

Like many of you, however, I owned and operated half a dozen airplanes for years with nothing more sophisticated for traffic-spotting than what the military calls the Advanced Technology Mk 1 Eyeball. I spent a quarter-century flying with only those Mk 1s to protect me from a collision.

While TCAS has been available to the airlines and much of corporate aviation for 20 years, “see and be seen” has long been the only economically feasible technology for general aviation. When properly applied, it can work reasonably well, but it’s the application that’s often difficult.

Unfortunately, few pilots have even a vague notion of how to scan for other traffic. The simple advice offered by instructors and examiners to keep your eyes outside the cockpit doesn’t begin to address the subject.

By definition, most military pilots fly regularly in close proximity to one another, so it should come as no big surprise that they’re better trained in proper methods of scanning. Merely keeping your concentration outside the airplane won’t necessarily provide warning of the approach of another aircraft.

The military teaches pilots to scan the airspace as scientifically as possible. The very word “scanning” implies a sweep of the surrounding airspace, and that’s exactly the wrong way to check for traffic. A sweep won’t allow your eyes to focus on anything, and even young eyes take a few seconds to focus.

The more intelligent method of searching for other aircraft is to concentrate on a series of snapshots of the airspace. Divide the visible sky into segments and take in each snapshot for several seconds rather than merely trying to scan the entire sky in a few seconds. One method is to allocate five seconds to each 30 to 45 degrees of forward sky. That way, you’ll be finished in 20 to 30 seconds.

Well, almost anyway. It’s especially important that you don’t ignore the rear quadrant during your traffic check. Statistics suggest that a significant number of midairs are the result of overtakes where a faster airplane rear-ends or drops on top of slower traffic, especially during descents. For that reason, you should check above and behind when possible and make it a habit to monitor the airspace ahead and below during letdowns.

The design of many aircraft makes it next to impossible to see directly aft. Even the single-engine Cessnas with their small windows at aft cabin offer little, if any, real visibility to the rear, despite their rearview mirrors. Few general aviation airplanes are configured with bubble canopies, so it’s often difficult to check the rear view without making at least a 90-degree left or right turn.

When you scan for traffic, try to focus on something rather than merely staring off into space. That’s not always easy to do in a hazy sky. Left to their own devices, your eyes will focus at about 15 feet, obviously not very useful when you’re trying to spot an aircraft, unless you’re practicing tight formation. Focus on the ground or a nearby cloud to give you a better chance to spot traffic. The farther out you can set your focal point, the better.

Remember that at a range of one mile, two airplanes approaching head on at a mere 150 knots will have barely 10 seconds to see and avoid. At military speeds, the danger becomes even more acute. Two fighters approaching each other at 600 knots have about 2.5 seconds to avoid a collision.

Also, remember that even in CAVU conditions, you may not be able to spot a small aircraft beyond one mile. (A truly large target such as a C5 or 747 may be easier to see.) Years ago, I participated in an FAA-sponsored test of a GPS-based collision avoidance system. We had a perfect day for the tests over the Catalina Channel off Los Angeles, with visibility better than 50 miles, and the GPS-TCAS system worked well, but one of the more interesting fallouts of that experiment was that none of the four pilots on board the Beech 58 Baron I was flying could spot another airplane beyond about a mile, despite knowing the target’s exact altitude, range and clock position. All four pilots had reasonable eyesight, but unless a target caught the glint of the sun, we usually couldn’t spot it beyond a mile.

(Chuck Yeager, the USAF pilot who became an ace during WWII in the European theater then went on to become the first person to bust the speed of sound, attributes much of his success in combat to his excellent eyesight. “It was simple,” he says. “I could spot them before they could spot me.”)

The wing placement probably has very little impact on midair susceptibility. The debate between high wing and low wing has raged since most designers abandoned two wings for one. Personal preference and training experience probably play a greater role than actual utility.

For touring and sightseeing, high wings are definitely better, as they provide a superior view of the ground, and that’s what most people want to see on cross-country flights. For collision avoidance, the low-wing design may have a slight edge because it provides a less restricted view of the airspace above. Also, the low-wing airplane enjoys better visibility during the base and final turns because the wing doesn’t block the view of the airport environment and runway.

There are several ways you can improve your chances of being spotted by other pilots. The most obvious is lighting. Strobe lights should be on anytime the aircraft is in flight, not just at night. Strobes can be seen from several miles away, even when the airplane is still invisible.

If you really want to improve your visibility, you could turn on your landing light, but standard tungsten lights are so hot, they burn out in a very short time. One way around that problem is to install one of the new generation of high-intensity xenon lights, such as the LoPresti Boom Beam. These sport a 5,000-hour life (compared to 25 hours on a standard tungsten light), generate about four times the power (400,000 candlepower compared to 100,000 cp with tungsten), use far less electrical power and may be left on for the entire flight. Xenons aren’t cheap (typically $1,000 each), but they’re an excellent investment if they only save your life once. They’re guaranteed to make your airplane far more visible, at least for people in front of you.

Another method of minimizing your exposure to possible midairs is to utilize flight following whenever it’s available. In major terminal areas, you may be turned down more often than not, but it never hurts to ask. I guarantee you’ll be amazed at all the airplanes you didn’t know were there.

Flying higher can reduce the risk as well. Many pilots on short flights prefer to stay low. That’s fine if you don’t mind mixing it up with the training aircraft, but you can reduce the midair risk exponentially by simply flying higher. Most of the time, you’ll only lose a few minutes, and you’ll fly in smoother air, often on top of the haze layer with better visibility.

More intelligent operational procedures can improve your odds against a midair. Prior to initiating a turn, look in the opposite direction first. Pilots too often check only the direction of turn for traffic. Similarly, while climbing or descending, make an occasional S-turn to see what lies ahead. Midair collisions often occur when there’s a vertical component involved. If you’re operating VFR above or below a cloud deck, be especially careful to stay at least 1,000 feet above or 500 feet below the deck, not because there’s a regulation that stipulates those limits (there is), but because it’s just good sense. Climb rates of some corporate and airline jets can exceed 3,000 fpm, whereas most pilots rarely allow descent rates that fast. Therefore, you need to maintain a greater distance above than below a cloud.

Flying at night presents its own set of challenges for collision avoidance. By definition, it’s easier to spot another airplane’s strobe in the dark, and a bright landing light really stands out against the blackness, but there are a few visual tricks here as well. The photosensitive cells in the eye consist of rods and cones. The rods, concentrated in the periphery of the retina, are better adapted for night vision. For that reason, you may be better able to spot a strobe or other light by not looking directly at it. When scanning for other traffic at night, you may find you can spot it at longer range by concentrating on your peripheral vision. This also works when looking for an airport beacon. Even if you have a good idea of where the airport should be, look 30 to 45 degrees to the left or right of that point, and you’ll be more likely to catch the flashing lights.

Apparently, some of the techniques must work, or perhaps I’ve been lucky. My near-collision with the Seneca occurred 17 years ago, and since then, I’ve given traffic a wide berth, at least other traffic that I’ve seen. I may never know how close I’ve come to disaster with airplanes I never saw, and that’s probably just as well.