You need Adobe Flash Player 10 to view this widget.

“Rock star.” It’s a phrase you frequently hear when talking to Kirk Hawkins, founder and CEO of Icon Aircraft in Los Angeles, Calif. He often refers to members of his team as rock stars, and he talks of his board members as rock stars in their respective industries. “At Icon,” Hawkins explains, “rock star means you’re at the top of your game—one of the best, if not the best, at what you do.” Of course, the term rock star also can imply a glamorous lifestyle—a kind of status that denotes being set apart from “normal” existence. If you were to apply the term to an airplane, the Icon A5 amphibious LSA would most definitely be a rock star.

The A5 has been teasing people’s interests since the James Bond-ian prototype was unveiled at a very rock ’n’ roll premiere in Los Angeles in June 2008. The lavish affair was complete with stage lighting, beautiful people, pumping music and celebrities—exactly what you’d expect at the introduction of a production airplane, right? 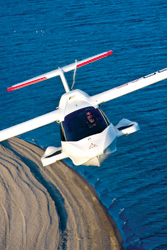 Since then, the Icon story has become well known. In an extraordinary example of viral marketing, Icon has—almost without trying—created an airplane so anticipated by the general public that it has leapt outside the geriatric boundaries of general aviation and become far more interesting than anything dished out by some tabloid diva.

We wanted to go behind the glossy curtain. Like a VH1 Behind the Music episode, we wanted the real dirt on the A5. After much cajoling and legwork, we got it: an exclusive, all-access, behind-the-scenes look at the aircraft that Kirk Hawkins says may, in fact, help us revitalize general aviation. Grab your backstage pass.

The Concept
It’s a cool spring day and we’re at Icon’s headquarters, deep in the heart of Los Angeles and within earshot of LAX. I’m here with Plane & Pilot Editor Jessica Ambats, and we’re verifying the address on the map. The exterior building is nondescript and looks like it houses an artist’s studio.

Inside, the office is done in a mid-century modern meets loft style. A George Nelson bench or Eames chair would be perfect here, and I quickly spy what I’d swear is a Murano glass decorative piece. Eclectic music flows throughout the minimalist setting.

Hawkins greets us, and I know him even though we’ve never met. He’s the “face” of Icon, and his story is well-trodden territory. He’s right out of central casting for a former fighter pilot with a square jaw and an intense gaze. I know Hawkins likes things that go fast, and I think if somebody called Hawkins an extreme-sports junkie, he’d be pleased.

As we sit in the airy design room, Hawkins tells us how he drew the basic design on a napkin (one he still has) after experiencing an epiphany in 2004. He had just read an article about the FAA introducing the light-sport category and sport pilot license. “These were the biggest changes in aviation in 50 years,” says Hawkins. “They gave me the idea to do something completely different with an airplane and take flying to entirely new audiences.” LSA meant Hawkins could create an airplane without having to meet the onerous requirements of FAR Part 23. It freed him to conduct market research about his idea while earning his master’s degree from Stanford Graduate School of Business that year.

The results of that research have become Hawkins’ mantra: There’s enormous pent-up demand for an airplane that’s exciting, sexy and easy to fly; one that puts the fun back into aviation. “There are literally hundreds of thousands of people who want to fly, but are turned off by the cost and complexity of entry,” notes Hawkins. He points to the dismal numbers associated with general aviation; from student-pilot enrollments and poor completion rates to the dwindling active pilot base. Hawkins says that the LSA category and sport pilot license are an opportunity to reverse these trends: to get aviation back to the adventurous roots that once inspired so many people to fly.

What’s different about the A5 is that it was born from design first, and then everything else followed. Every button, knob, curve, material and dial on the A5 was thought of first from a design, human-experience and aesthetics perspective. “Take a Jet Ski, for example, while fundamentally it must deliver functional performance, many of the elements are there solely to enhance the way it looks and feels, and the overall human experience—to evoke a strong emotional response,” says Hawkins. “Your average airplane isn’t designed this way—and given its different mission of pure utilitarian air transportation, it isn’t required to be.”

On the walls around us are the proprietary “storyboards” used to create the production concept of the aircraft. Icon profiled potential A5 buyers and gave each an imaginary name, along with a dossier of “personality” information. There is, for example, “John,” the pilot. He likes the complexity of flying and is a perfectionist professional with a type A personality. There’s “Derek,” the skier/skateboarder/snowboarder with tattoos who likes everything fast and furious. There’s “Brock,” the single and moneyed playboy with time and funds to spare. There are several more. Each profile is distilled down to features he or she would likely want in an airplane. The design features are charted out and rated, with the final product being an ideal combination of characteristics from each profile.

The Team
Months later, Jessica and I travel to Lake Isabella, where Icon conducts private flight-testing. Some 40 miles north of Tehachapi, this is where Icon’s designers and engineers are based. Isabella is void of people, except for the encampment Icon has set up. This is a logistically difficult site for testing, since everything has to be brought in. There’s a small fleet of watercraft huddled near the shore: a sport boat, a pair of new Sea-Doos and a wakeboarding boat wait patiently. A birdlike Aventura II amphibious kitplane is tied to the dock, and an RV rests on the rocky shore, with chairs and coolers placed loosely around it. This is Icon’s base-ops for the next few days.

I can see the A5 in the water, being coddled and caressed, as any rock star should be. The A5 looks good in the water—less gangly than the mockup being displayed to the public. She looks futuristic and young, and the calm waters of Isabella lap her sides with a gentle “thunk” sound against her composite hull. A team hovers around the A5, attending to various duties. Their calm demeanor belies the fact that many have been working endless days and hours getting the A5 ready for flight-testing.

Hawkins’ genius is demonstrated in the Icon team. He recruited some of the best engineers and designers from Scaled Composites, the Burt Rutan company that gave birth to SpaceShipOne, Voyager and WhiteKnightTwo. Hawkins brought Steen Strand on board, a former investment banker turned product designer and entrepreneur (as well the inventor of the “Freebord,” a 70,000-unit-and-counting sales success that combines a skateboard and snowboard). Hawkins has brought young, eager and talented minds to the task, while adding the rock stars of automobile and power-sport design, marketing, manufacturing, investment and business.

Today belongs to pilot and lead aerospace engineer Jon Karkow, who spent more than 20 years designing and developing ultra-unique aircraft at Scaled Composites. He was, by all accounts, the most respected engineer in the history of Scaled, having led some 20 aircraft programs and designed five complete airplanes, including the Virgin Atlantic Global Flyer. A lauded aeronautical guru, Karkow is a meticulous pilot, and the only pilot to have flown the Icon A5 other than Hawkins. Karkow will fly our aerial photo session. He’s a man of few words, but every team member repeats the same thing: “Jon’s the man.”

Matthew Gionta doesn’t look a day over 25, but his experience betrays him. Gionta is the chief technical officer and VP of engineering on the A5 project. At Scaled, he also was the VP of engineering, and he served as project engineer on no less than 11 programs in his first six years there. As we sit along the lakeshore under a makeshift shelter, Gionta tells me about flight-testing the A5. “We’re coming out of the hydrodynamic testing phase,” he explains. “We’ve refined the hull shape to give it optimum performance in the air and on the water. The A5 is excellent in both.”

Gionta and I talk for more than an hour, and he gives me enough information for 10 magazine articles. He tells me about the Icon’s Rotax 100 hp engine: “It’s enough power. But we’re also looking at the turbocharged engine.” He also discusses the innovative tooling used at the team’s Tehachapi workshop: “Because of the materials we’re using on the A5, we can use ‘disposable’ tooling that allows two or three uses.” And he reveals how production of the 430-odd pre-ordered airplanes will likely start in California, “But California is hardly friendly to aircraft manufacturing,” he adds ironically.

The Airplane
The sun is giving off a golden light as the team prepares the A5 for our air-to-air shoot. Karkow’s girlfriend, Cheryl, jokingly gives him a piggyback ride into the water so he doesn’t get wet. Karkow is even more reticent donning his parachute and processing the intricate checklist of critical items. I’ll follow the A5 in the Aventura, with Hawkins at the controls. At the appointed time and through practiced radio coordination, the A5 fires up and heads away from shore like a newly hatched duckling.

Gionta tells me the production version will have many innovations, such as wings that fold at the push of a button (“We already have that mechanism tested,” he says), an airframe parachute and an angle-of-attack indicator (a novelty for most pilots). “You’ll fly alpha, like in a fighter,” says Hawkins. As the A5 lifts off the water below us, I can see that this is a thing of beauty. All I can manage to say to Hawkins is, “Wow, it’s gorgeous.” He smiles, and I hope he heard me right.

As we fly formation with the A5—with Hawkins handling the Aventura every bit like a fighter pilot—I realize the magnitude of the A5. This is a machine that appeals in a big way to nonpilots and is changing the public perception of flying. Skimming just 20 feet above the water, I sense the fun and excitement that Hawkins is working to convey. I really do feel like I’m in a flying Jet Ski. As we land and take off from the choppy waters, all I want is to keep doing this.

“I’ve been fortunate to do all kinds of flying in my life,” says Hawkins as we glide above the whitecaps. “And my favorite is low and slow, with the windows open, interacting directly with the environment around me.” I keep that thought in mind as we land just behind the A5 after an hour in the air. With the sun setting, Icon’s team goes to work drying off the gleaming, white A5 and gently pulling it onto its custom trailer. Music starts pumping, food goes on the grill and the impossibly young team sends the day off with a little celebration. The show is over for now.