The Pilatus PC12 turboprop single, as big a seller as it is a plane, continues to be red hot in the market despite upcoming competition from Textron Aviation in the form of the Cessna Denali. Pilatus announced that it will deliver 85 airplanes this year, down a skosh from the 91 it delivered last year, though both put the factory, located in the alpine town of Stans, Switzerland, at near capacity. The company has always been focused on establishing and maintaining a sustainable production rate, and around 90 airplanes appears to be the sweet spot.

In a separate press conference at NBAA, Textron Aviation leaders gave a status update on its Cessna Denali, a big turboprop single that will compete directly against the PC12. There has never been a directly competitive turboprop to the PC12, which combines rugged utility appeal with a big cabin and solid speed. The Denali fits that same slot. 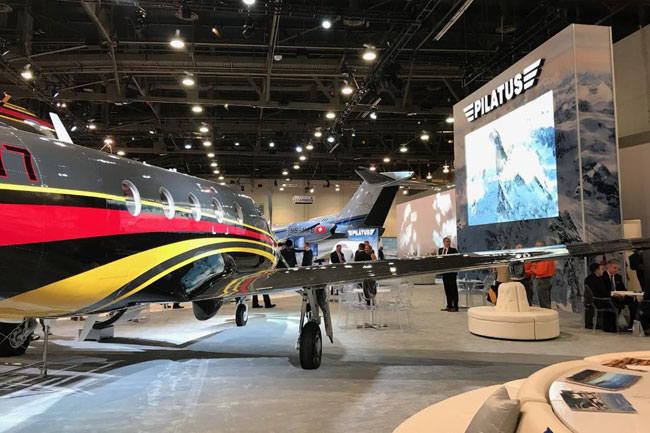 Textron showed images of progress it is making on the construction of the Denali, including major structures. The company is targeting first flight for late 2018. There are real innovations in the Denali that have driven what Textron said is a groundswell of interest in the product. Among these is the GE turboprop engine that will power it. The Advanced Turboprop will be the first turboprop engine in its class to feature full authority digital engine control (FADEC), which will greatly simplify engine control and management, thereby cutting pilot workload, while optimizing performance and minimizing fuel flow. GE says the engine will use many parts built by what is popularly thought of as 3-D printing but which is accurately referred to as additive manufacturing. This method keeps parts count low and integrity high. GE expects the engine to be as much as 20 percent more fuel-efficient than comparable engines.

So if there’s trouble in paradise, it’s not manifesting itself in a slowing of PC12 sales. The company though, has taken notice of its coming competitor. Even though the first Denali delivery isn’t planned to take place probably until 2020, the Denali will be fast, at 285 knots, long-legged, with a  range of 1,600 nm, and roomy, with a best-in-class cabin. At Pilatus’ press conference on Monday at NBAA in Las Vegas, Pilatus’ Tom Aniello acknowledged in passing that, of course, his company would “love to have FADEC,” a feature that is not available on any Pratt & Whitney GA turboprop engine.

Learn more at Pilatus and Cessna.