Land being the valuable commodity that it is, it’s becoming more and more difficult to find an airport offering a choice of runway directions—other than the two alternate ends of a single strip of pavement. And so, more often than not, we’ll be faced with exercising our crosswind takeoff and landing skills. This task does not come naturally; proper alignment during a crosswind is something that must be forced on the airplane, much against its will. 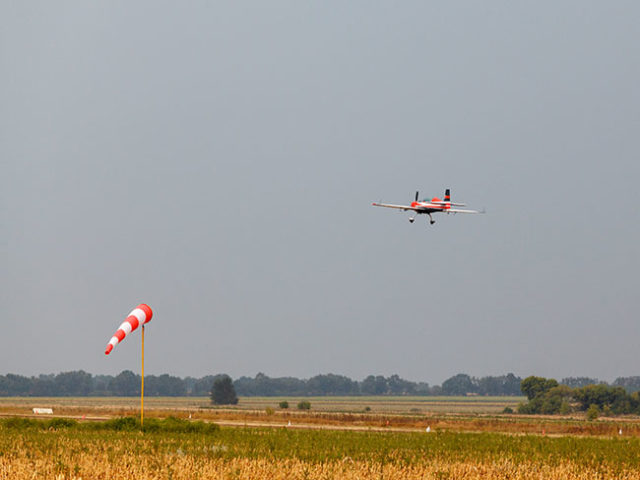 If I am called upon to evaluate a pilot’s airmanship, the one series of maneuvers I’d like to see is a crosswind takeoff, circuit and landing. That tells me if the person at the controls truly has gained command of the aircraft, because airplanes do not cope with a sideways wind on their own. Left to their own devices, they will be happy to depart the narrow confines of the runway, drifting away under the influence of an angled wind.

Of course, we were all taught the rudiments of crosswind operation in the early days of our piloting career, but it never hurts to review the basic of hands-on flying. The objective, during any runway operation, is to maintain landing gear alignment with the aircraft’s track, which hopefully will be along the runway centerline. At the same time, lateral movement, caused by wind acting at an angle to the aircraft’s longitudinal axis, must be resisted.

PICKING UP THE GAUNTLET

As takeoff begins, the friction of the landing gear rolling against the runway surface will hold the airplane on a straight path, but as the wings begin to develop lift, particularly at rotation when the nosewheel is removed from contact, resistance of the landing gear lessens and aerodynamic forces become primary. A crosswind component will then act to push the aircraft toward the downwind side of the runway, and a weathervaning yaw will attempt to turn the aircraft’s longitudinal axis into the wind. In the absence of pilot input, the forces produced by sideways scrubbing of the maingear tires will develop severe stress on the gear, alleviated only by liftoff if not corrected.

Hopefully, the pilot will have anticipated the wind’s influence and will steer straight, first with the nosewheel and then with more reliance on downwind rudder as the takeoff run progresses. Additional rudder input may be needed as rotation occurs. With an unknown amount of crosswind component awaiting us, it doesn’t hurt to apply full upwind aileron at the beginning of the run, spoiling any tendency of the upwind wing lifting first. However, as the ailerons become effective, the amount of deflection needs to be reduced. Upwind roll control application, applied to create sideslip and negate the crosswind, must be used judiciously, to avoid excessive drag from the upward-deflected aileron. Use only enough aileron to counter the wind drift. Once free of the surface, rudder pressure is released and a crab angle is set up that keeps the climbout path aligned with the centerline. In some instances, this crab angle may have to be modified to comply with a “maintain runway heading” assignment by ATC.

Anticipation of the wind’s effect should be in mind long before reaching the runway. Listen to the ATIS broadcast or look at the uploaded current weather for the airport to calculate the effective crosswind for the expected runway in use. Low altitude wind experienced during the arrival segment may not mirror the surface winds, particularly above 1,000 feet AGL. You should also consider the wind influence that will be encountered on the base leg. With a following wind on base, you’ll need to turn in earlier to reach a straight final approach without correction, and you may wind up a bit high on the glidepath, because there will be less time spent on the base leg. If a headwind is expected on base leg, the reverse will be true; the final turn should come a little later than usual and you might need to add some power to stay at or above the glideslope lights, since you have been flying on the base leg for a longer period of time.

If starting out in the clouds, you’ll see the crosswind’s effect developing as you join the final approach course. There will be a noticeable split between the inbound course and the heading required to stay on track. Expect that number to change as you descend, but you should increase your scan rate to watch the localizer symbology more closely. If flying manually, don’t just turn onto the published inbound course. Be prepared to fly a heading that keeps the localizer centered.

At breakout, do not be surprised to see the runway behind a windshield frame or in the right side of the windscreen. That’s your clue that it’s time to go to work. Part of flying a stabilized approach is have the airplane’s track in alignment with the runway. This may not always mean flying down final approach with the downwind rudder pedal bent over and aileron cranked in to lower a wing, thus generating sideslip to exactly cancel the wind drift. Crosswind correction technique depends on pilot and aircraft preference. However, at some point before touchdown the aircraft’s longitudinal axis will have to be brought around to approximate the runway heading.

A slipping approach, flareout and touchdown is a proper technique learned from training in light aircraft, whose slow groundspeed allows a crosswind component have a greater influence. A wing-low landing works in faster, heavier aircraft as well, but banking into the wind, in an effort to plant the upwind wheel in advance of the downwind maingear, has to take into account things like large wing flaps that might be scraped against the runway. Use the recommended crosswind landing techniques from the airplane’s operating handbook or tips learned in transition training.

The crabbing approach, turned into a wings-level touchdown by a last-minute application of downwind rudder to line the tires up with the pavement, works quite adequately in larger aircraft, which have enough inertia to keep the aircraft moving along the centerline for a few seconds after “decrabbing” until the tires hit. If there’s some yaw/roll coupling in the design, however, you’ll have to counter the rudder use with some opposite aileron to keep the upwind wing from rising.

IT AIN’T OVER ‘TIL IT’S OVER

Be ready to go around at any point up to and even during touchdown. Anyone can encounter a last-second gust that catches them by surprise, perhaps exceeding the plane’s capability. Whether it’s the pilot’s skill level or the amount of rudder provided to generate sideslip, there are limits beyond which it’s better to go around and try again. If you have to abort three successive attempts it’s obvious the wind is not going to let up, so go elsewhere to land, on a runway more aligned with the wind.

Whichever technique you or the aircraft manufacturer favor, do not consider the landing finished at touchdown. A crosswind, particularly one with gusts varying its influence, requires continuing pilot inputs during the rollout. Make sure the downwind tire is in solid contact before applying the brakes, or you’ll get an antiskid cycle, if not a flat spot on the tire from locking up the wheel. Once you’ve rolled off the runway, keep a hand on the controls to avoid wind damage from a gust forcefully shoving a control surface to the stop. After parking, apply gust locks and any other devices needed to preclude wind injury.

Every aircraft has crosswind limitations, and you’ll need to respect them by calculating the amount of sidedraft you’ll be taking on. Crosswind charts depict windspeed arcs and radial lines to match the angular difference between wind and runway, with the headwind component shown in the vertical scale and the crosswind component at the bottom, on the horizontal scale. For a rough rule of thumb, consider winds blowing at 30 to 45 degrees off the runway to be half crosswind and half headwind; if the wind is 50 degrees or greater to the runway direction, I’ll treat it as all crosswind.

If the wind is reported as gusting, use the higher gust figure in your calculations. Ask the tower controller for a wind check on short final, if there’s any uncertainty. If the airport has perimeter and midfield wind readouts, you’ll want to use the wind report closest to the touchdown zone, but beware of rapidly-shifting winds if a thunderstorm is close by. This windshear danger is particularly noteworthy during a takeoff and climbout, when the aircraft is heavy and additional power is not available.

Respect the ops manual’s crosswind limitations; they are not suggestions, they were derived from testing, using average piloting techniques, and they are probably close to the aircraft’s limits. An airplane’s maximum crosswind capability is reached when running out of downwind rudder that can be applied to maintain runway alignment. At the risk of scraping a flap or wingtip, one can always force a wing down with aileron in an effort to generate more sideslip, but if you can’t counter that bank with rudder it will simply turn the aircraft into the wind. Plant the aircraft firmly, without trying to float it gently onto the runway, and get the nosewheel down quickly to gain its steering and rolling resistance.

Crosswinds are simply a fact of modern aviation; gone are the days of “flying fields” with expanses of greensward allowing operation into the wind. Be prepared to do combat.