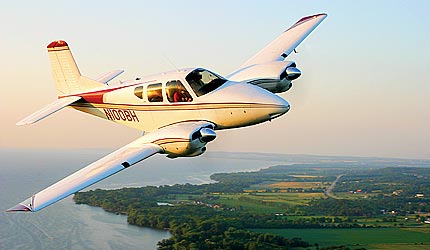 The grass around the 1958 Beech Travel Air was beaten down, trampled by thousands of feet, wearing a path around the wings and tail of N100BH. When you see this kind of wear and tear on the ground at Oshkosh, where more than 2,000 show planes sit proudly in the sun, it’s a sure sign that something special has arrived.

The airplane literally glistened in the sun—an unmistakable gleam reflected by the windshield challenged everyone to draw closer. In the 1950s, Olive Ann and Walter Beech were known for turning out classy airplanes from their Wichita, Kan., plant, but few rolled out the door that even remotely looked like this one at Oshkosh.

Today, most Travel Airs are used by flight schools for twin-engine training, relatively few are in private hands and even fewer are in pristine condition. A useful load of 1,172 pounds, an economical fuel flow and relatively fast cruise speeds didn’t overcome the higher horsepower and gross weights offered by Beech’s new light twin, the Baron. The Beech model 95 first filled the product slot between the model 35 V-tail Bonanza and the larger twin-engine D-50 Twin Bonanza. One hundred and seventy-three airplanes were built that first year, and by the time production ended 10 years later, 720 Travel Airs had been manufactured.

Beech couldn’t have known it was creating an unsung twin-engine workhorse. Conceived as a simple step in its product line, the Travel Air’s simple elegance and economic operation made it one of Beech’s most successful airplanes, the proverbial light-light twin. The first versions of the airplane shared the fuselage and interior detailing of the J35 Bonanza, arguably the finest-handling versions of the V-tail airplane ever made.

Crisp roll and positive pitch response have endeared the airplane to thousands of fledgling multi-engine pilots. Good handling and, by today’s standards, marginal single-engine performance aren’t enough to save an airplane from the oblivion of use and neglect, however. Some special verve or attraction is required. Without a V-tail, or two big-bore engines and six seats, you have to wonder what was special about this particular “Badger.” For those who didn’t know, Beech was originally going to call the model 95 project the Badger until it became known that the U.S. Air Force was also interested in the name. Deferring to the Air Force, Beech chose to resuscitate an old name in its history, and the new Travel Air was born.

How did this Travel Air come to dazzle the crowds at Oshkosh? The truth is that the airplane got there by accident—or the result of accidental friendship.

You could say that the restoration of N100BH began in the Airframe and Powerplant School, where JJ Janovetz and Richard Wheeler became friends. Their love of things aviation led them to the decision to work on their private pilot’s licenses, which in turn resulted in their partnership in a Piper Warrior. Along the way, Janovetz went to work as a mechanic for renowned air-show pilot Charlie Hilliard. Janovetz became a true craftsman with aluminum and steel, one of those rare mechanics who works in art rather than nuts and bolts.

After flying for several years on the side, Janovetz and Wheeler decided they needed to get their instrument tickets in the Warrior. They ended up adding a third partner in the airplane, instructor Archie Taylor.

After 18 years in the Warrior, they decided to branch out into twin-engine flying. Janovetz wanted to find a Twin Comanche, but before he could locate a good one, N100BH appeared in his own backyard. In 1996, the three partners became Beechcraft converts, purchasing the Travel Air in a trade deal with Jim Hansen, Hilliard’s ferry pilot, Hilliard’s Widgeon and the partnership’s cash.

You could say that the restoration really began because Janovetz didn’t like the gear. The same landing gear used on its cousin, the T-34, it had been over-painted several times and just looked raggedy. They didn’t set out to remanufacture an entire airplane; Janovetz just wanted the landing gear to look better. He took the gear off, stripped and repainted it.

Most mechanics are inveterate tinkerers and Janovetz is no exception. The next thing on his list was reworking the windshield.

“The windshield was kind of messed up. We decided to totally redo it,” he explains. “One day, while we were looking at the back side of the instrument panel, we just kind of looked at each other and I said that now would be the time to change the radios.”

So, they did. But first, an all-new instrument panel with internal lighting had to be built to install the King avionics.

“Next, I wanted to change out the fuel bladders,” Janovetz continues. “And then, as long as we had it apart that far, we did the interior. And then, of course, the engines. We had to overhaul the engines.”

One thing led to another. The desire for new glass sold the partners on the idea of repainting the airplane. For months, they struggled with the design.

“We just painted the thing in overall white before we had a design,” Janovetz says. “The basic scheme is from a magazine I found once, but Richard and I just had to go in there and tape the airplane up until it looked right. The silver and wine colors I saw on a Westwind and, well, it just looked sharp.”

Working out of a hangar on the west side of Fort Worth’s Meacham Airport, the project fell further apart as each new system or area was uncovered and re-work began. Janovetz made no apologies. “Before we knew it, seven years had passed and we had totally redone the airplane. And I mean every nut and bolt and piece of sheet metal.”

During that long rebuild, three partners became five. Friends of Taylor’s, partners in a Cessna 414, became interested in the project. Dan Bruhl pitched in with the JPI engine monitor and the S-TEC 60-2 autopilot. Lee Finley paid for the paint job and the GPS. All of the partners pitched in with the restoration project to one degree or another. After all, rebuilding an airplane to Walter Beech’s exacting standards requires a lot of work.

With less than 50 hours on the newly restored airplane, Janovetz and Wheeler flew to the EAA’s AirVenture 2003 in Oshkosh. Knowing they had a beautiful airplane and nervous about how it would show, they wanted to stack it up against the competition. Almost immediately, it was a hit. The grass paid the price as the Classic Vintage judges looked over the airplane, and on awards night, Janovetz, Wheeler, Taylor, Bruhl and Finley were rewarded for their hard work and perseverance with a Reserve Grand Champion award, a Silver Lindy. Just about the best of the best.

Not too shabby for a bunch of Texans working part-time in a cow town. I’m sure Olive Ann and Walter would be proud to call them “Beechcrafters.”