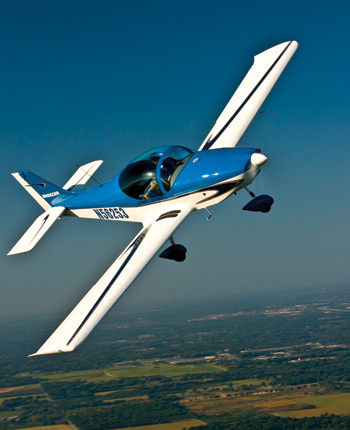 Flying an unfamiliar LSA is a bit like a first date. Your friends have talked her up. She has a pretty smile, but will you get along? Does she Tweet or use Facebook, keep an old-fashioned diary, or both? Most important: Will she have a thing against flight review pilots?

I approach these aerial engagements by respecting the plane and listening more/talking less. After all, I have to report back later, and I want to give a sharp—and fair—impression.

So said, here we go with the Breezer II, an updated version of the lovely aluminum airplane from Germany that first won ASTM certification in 2005.

For this flight, it was a bit like dating the girl next door. I had first met the Breezer on a sunny spring morning at Mike Z Sport Aviation in Plant City, Fla.

Mike Zidziunas has been around the light-sport biz for a long time, as a flight instructor and as an A&P. His operation (www.mikezsportaviation.com) is somewhat unique in that it’s an LSA-only flight school and maintenance center. He’s also linked into Josh Foss’s Sportsplanes.com, a nationwide network of regional LSA centers that provide sales, flight training, warranty and maintenance service, and parts.

That day in 2008, we wheeled out the Breezer II and jumped up for the air-to-air photos you see here. During the shoot, I was quickly infatuated with her good looks, the clean yet comfortable lines and how well Mike Z flew it in formation. 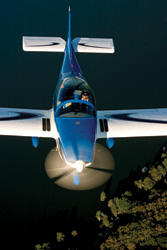 The Breezer II (www.breezeraircraft.com) is an upgrade: Fuel capacity is increased, a firewall-forward baggage area carries an additional 40 pounds or so, and a steerable nosewheel ably assists the beefy arc of the fiberglass main gear.

Getting To Know You…
She’s a pretty airplane: solid and cute, with a no-nonsense profile and a big sliding canopy. Breezer is the kind of girl you want to treat right and take home to meet Mom.

When you step aboard (from a fuselage-mounted bar in front of the wing), the metallurgical echoes from your shoes bring a smile. Here’s a metal bird reminiscent of the Wichita tin classics of yore, in sport clothes. Suh-weet.

In the seat, you feel immediately comfortable and welcome. The leather upholstery is well made, tastefully colored and—most important—well-padded. No squirming around on this date. The nonadjustable seat back is slightly vertical for my tastes; not as bolt upright as a Piper Cub, but a little lumbar cushion would help.

My first flight in ’08 was little more than a glance and smile across the backyard fence—maybe 10 minutes to move the controls around a bit. But as I reported in a Plane & Pilot column: “Nominal three-axis skills will stand you in good stead with the Breezer. The controls are light and well balanced…it’s a flat-out hoot and holler to fly.”

That jaunt was one of my first in an LSA. I’d had few dates in the class and was still a bit shy. So when I got another chance a year later to date Breezer again, I jumped. Mike Z picked me up at Wallaby Ranch Flight Park near Orlando, a hang glider paradise. I climbed in and adjusted the rudder pedals via two cabled T-handles just under the “dash” (handy and effective).

The panel is roomy and beautiful. A terracotta-colored leather-like covering backs the standard steam-gauge package, while the beveled center section angles toward the pilot for easier viewing of the GPS. The ship we flew comes standard with Garmin’s 496, SL 40 COM radio and GTX 327 digital transponder. This deck would shine with an EFIS screen.

Breezer sports a more traditional split bubble in favor of the forward-hinged single-piece canopy other LSA have. That dictates a roll bar–like joining brace arcing across your upper-forward field of view.

One advantage here: You can keep it cool on the ground without worrying that a strong tailwind will slam the canopy forward like a front-hinged bubble can. Just slide the canopy aft while taxiing, then dog it down with the overhead cam lever when you’re good to go.

Visibility is terrific: a 360-degree horizontal panorama, since the canopy reaches back quite a ways behind you. The configuration bestows a vaguely ’50s fighter-jet look, too. The padded control stick is also handholding comfortable. Flap rocker switch and choke control on the center console make for an easy reach. Nosewheel steering is effective and pedal-top toe brakes make ground handling a breeze (sorry, couldn’t resist).

“You can hold the airplane still with those Beringer brakes even at full throttle,” Mike Z says. Works for me. The only complaint about the interior was a loose carpet underfoot, which bunched up under the pedals: a potential distraction. I’d glue it down; easy enough to do.

Getting To Know All About You
“Clear!” shouts Mike Z as he fires up the Rotax 912 ULS with a simple turn of the key. No mixture, no endless cranking: love that Rotax. The single fuel tank is mounted between the engine and the cockpit. My host praises the long, roomy engine compartment. “Easy to work on,” he says.

Twisting in the console-mounted vernier throttle, we bump across Wallaby’s expansive grass field in the hot afternoon light. “I do 100% of my flying with the vernier,” says Mike Z. “I like the precise throttle adjustments. “But,” he adds, “the factory is changing back to lever-actuated throttles on either side.” Keeping back stick to lighten the load on the nosewheel, we’re airborne soon enough and in a cruise climb at around 600 fpm…and that on a hot, humid Florida afternoon. Best climb with two aboard is around 900 fpm, and well over 1,100 solo. Perky!

Airwork (Work? They call this “work”?) turns out to be a stroll in the cloud park with my date, as Breezer handles the bumps without a fuss. It’s a delightfully solid airplane that Cherokee and Cessna pilots should take to readily. Climbing to cooler air, we trim for 100 knots. The air vents are adequate, though on this hot day, a more forceful airflow would be most welcome. “You don’t need much rudder,” says Mike Z. True enough: Pulling 360s left and right, I’m over controlling the pedals (I learned on a rudder ship). Feet, stop dancing! One difference from my earlier date with the Breezer is the aileron control, which feels noticeably firmer this time around the dance club. Pitch is somewhat lighter than roll, although not overly “pitchy.” Mike Z says that’s probably due to gyroscopic stability from the long nose.

Breezer also weighs almost 800 pounds empty, heavier than many LSA. That helps, too, in turbulent air. Doing Dutch rolls, I find I’m putting in a bit of muscle. Maybe I’ve gotten weaker: Time to hit the gym, Jim. But these lateral pressures aren’t objectionable, just not fingertip wingover–like. Once turn is established, just center up and you can carve that turn all day long. Yep, kinda like a Cherokee.

Trimming for pitch is a “breeze” thanks to the stick-top button. Love that feature. Visibility is really excellent forward, overhead and, well, behind, too. Slow flight maneuvers only add to my sense of familiarity and comfort. She’ll hang on the prop in a no-flaps takeoff stall, requiring just a bit of right rudder to keep the ball centered. Very light buffeting presages the stall. Then, just lower the nose, and she’s moving right along again—a very gentle break. With flaps, you get a bit more buffeting, but the Rx is the same: Relax the stick, and she flies herself right out. Landing stalls are equally non histrionic. At stall, relax the stick, twist in some power, and she’s cruising again without any drama. The ailerons get mushier right above stall but maintain decent authority, even at 35 knots indicated and flaps around 20 degrees. Cruising at around 5,100 rpm delivers 105 knots indicated.

Throwing Her Weight Around
Fuel management is a snap, but Mike Z recommends a weight-and-balance calculation for the beginning and end of the trip, due to that forward, single fuel tank. As the go-juice burns off, the CG naturally moves aft. That’s one reason for the baggage compartment up front—to help you stay in the CG envelope. Just for fun, we practice a falling leaf. Slow down, using feet to keep wings level, not ailerons, or she could spin. Indicating 35 to 40 knots, hanging right on the buffet, we float down nose-high at more than 1,000 fpm.

Descend on final, pull up, let her settle and plunk down—all are nominal and friendly. Then we crack the canopy to beat the Florida heat. Watching Mike Z climb away from Wallaby minutes later, I have to smile. Breezer II is so easy to be with. Sweet, fresh and dependable…just like the girl next door.