For years, climate scientists at NASA have been conducting research that strongly suggests contrails are having an even greater environmental impact than aviation-related CO2 emissions. Between mixing hot exhaust into the much colder air at altitude and the soot, metal particles, and other emissions from burning traditional jet fuel, air traffic is, essentially, creating more clouds. The high-altitude cirrus clouds—observed to be growing significantly more numerous over the last quarter-century along highly travelled air routes—act as an insulating layer, trapping more energy in the atmosphere and likely contributing to the rise in average global temperature. 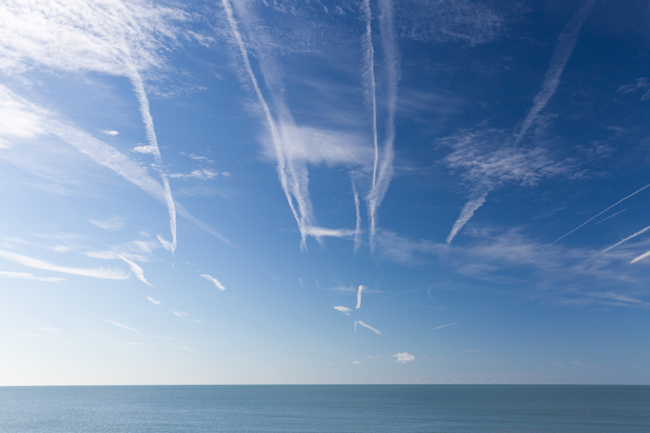 With that in mind, NASA’s Alternative Fuel Effects on Contrails and Cruise Emissions Study (ACCESS) has spent several years running flight tests on alternative fuels to see if there is a reasonable way to mitigate these effects without cutting into air travel. The test flights were conducted with a DC-8 fueled up with a 50-50 blend of aviation fuel and a biofuel produced from camelina plant oil. For each test, three chase aircraft followed behind and gathered data on aircraft-generated contrails at altitudes flown by commercial airliners.

The results of the study were significant. It concluded that using biofuels in jet engines can reduce particle emissions, including soot, in their exhaust by 50-70%. “Soot emissions also are a major driver of contrail properties and their formation,” said ACCESS project scientist Bruce Anderson. “As a result, the observed particle reductions we’ve measured during ACCESS should directly translate into reduced ice crystal concentrations in contrails, which in turn should help minimize their impact on Earth’s environment.”

The study’s findings came from a NASA-led international research program in cooperation with agencies from Germany and Canada, but ACCESS research is far from over. The plan is to continue examining the effects of replacing current fuels with biofuel on both aircraft engines and the atmosphere. NASA has also stated that its goal is to use biofuels for its QueSST supersonic passenger plane.