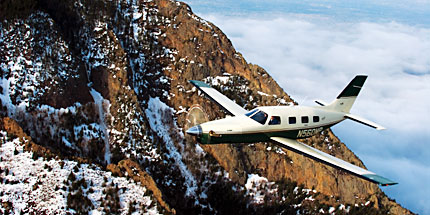 Before they were booted up, the Chelton boxes in the Malibu Jet Prop we tested looked like any number of other newer panel configurations. Almost every new airframe manufacturer is putting glass into the cockpit now with a primary flight display (PFD) in front of the pilot and a multi-function display (MFD) right next door. But once the Chelton Flight System’s power is turned on, any resemblance to what you have seen and flown before begins to fade. Future technologies that have been tossed around for several years now—Highway In The Sky (HITS), Synthetic Vision and 3-D Terrain—are suddenly sitting right in front of you.

Take HITS. The concept has been around for a while, but mostly as an artist’s illustration of things to come sometime, out there, in the future. The idea is that if you can create a “tunnel” of concentric boxes that lie along an aircraft’s intended course, the pilot needs merely to keep the depiction of his miniature aircraft on the PFD flying within the boxes and the aircraft will safely navigate from A to B. In 2003, Chelton perfected the HITS technology and the FAA certified it without hesitation. “The HITS boxes on the screen represent an area that is 400 feet wide by 320 feet high,” explains Randy Shimon, Chelton’s vice president of sales.

That is twice the accuracy of an ILS localizer at decision height. Boxes are spread out throughout the aircraft’s route at 2,000-foot intervals. “You can imagine the safety of flying all the way cross-country with that kind of precision,” he says.

If you find yourself a bit reluctant to just blindly follow boxes through the sky like some video game, be advised that HITS is just part of the system’s overall navigation capabilities. The Chelton PFD also offers Synthetic Vision with a 3-D terrain view.

The PFD actually combines pitot-static information from a Shadin air-data computer, attitude and heading data from a Crossbow, Inc., solid-state attitude and heading reference sensor (AHRS) and position input from a Free Flight, Inc., GPS WAAS receiver. The result is a real-time, forward-looking, remarkably detailed, topographically accurate picture of the world that realistically mimics the view from the cockpit, even if you’re in IMC and there isn’t one! Moreover, this Synthetic Vision and 3-D image of the road ahead is a full 70 degrees—almost twice what human beings see when they look out the window. That talent to see where you’re going, no matter what the circumstances, translates directly to safety. “This system can eliminate controlled flight into terrain [CFIT] accidents,” points out Shimon.

CFIT can occur when a pilot is unable to distinguish the ground from the sky. For example, in the John F. Kennedy Jr., accident, investigators believe that Kennedy’s aircraft flew into an unusual attitude because of the lack of visual references from a nearly indistinguishable sky and sea. “With the Chelton system, there is always a horizon in front of you, regardless of the visibility,” says Shimon.

Instead of six or so gauges to interpret, there’s a single 3-D picture that is directly in front of the pilot. And if an aircraft should get into unusual attitude, the Chelton PFD automatically depicts the shortest way to level flight. Large red V’s appear on the display, showing you where the ground is and which way to roll back to level.

But it gets even better. Lose an engine, and the Chelton box will suddenly illustrate a dead-stick glide area, removing the guesswork out of which perspective landing areas you may or may not reach. Even more impressive is what Chelton calls its Flight Path Marker (FPM). Missing from even airliners, the FPM can be the most useful symbol on the entire display. Simply put, the FPM shows you where your airplane is going and where it’s going to be up to one minute into the future.

“Normally, on most terrain awareness systems, you see red when there’s a mountain ahead. But how do you really know if you’re going to clear it or not? All you might really know is that it’s within 500 feet of your altitude. With the Chelton, you just look at the FPM. If you see terrain behind the FPM, you don’t have the altitude to clear it. If you see sky, you know you’re good. The FPM even corrects for wind,” says Shimon matter-of-factly.

The FPV is worth its weight in gold during VFR approaches, platinum for IFR approaches. When the aircraft rolls out on final, an image of the runway will eventually appear on the display screen. Put the FPM on the runway numbers and keep it there. That’s where the airplane will land. Period. 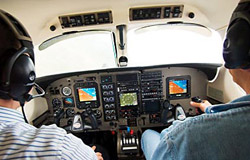 “I put a 20-hour student pilot in the left seat,” says Shimon. “I set up a HITS approach to a DME Arc Back Course, and he flew it flawlessly all the way down to minimums. And to ATP standards.” So all this looks good on paper, but just how good is the Chelton system really?
Advertisement

In 2002, the Federal Aviation Administration (FAA) authorized a $4.9 million contract with Chelton to provide more than 150 of the units for installation in aircraft that are participating in the second phase of the Capstone Project, a study in Southeast Alaska aimed at upgrading the national airspace. The FAA’s own analysis concluded that the system’s abilities to see terrain provided an additional 41,000 feet of airspace along 1,521 nm of existing route structure. Why? Because normal minimum enroute altitudes are controlled by the reception of navigation signals from ground-based units. Due to line-of-sight limitations, aircraft are required to fly thousands of feet higher to assure terrain clearance. The Chelton system allowed aircraft to not only see the terrain more effectively, but the FAA also went on to say that “the crash rate in the test area, which had been abnormally high in that part of the country, has dropped significantly.” Another Capstone official went on to describe the Chelton system as “one of the most innovative technology advancements in instrument flying history since Jimmy Doolittle’s historic flight in 1929.”