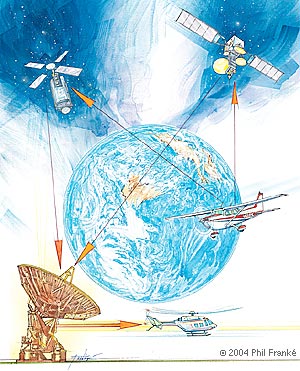 Like most of you, I’ve been flying with one or another ELT for years, hoping I’d never have a reason to use one. In truth, I took them for granted, assuming the technology would save my life if it ever became necessary.

It took 33 years of flying before I finally needed an ELT. It happened in 1998 during a 9,000-nm delivery flight of a Piper Lance from Santa Monica, Calif., to Nairobi, Kenya. On the final hop of the trip, four hours out, coming up on the Ethiopia/Kenya border, the EGT bar graph readout on the Lycoming’s number-two cylinder dropped off the bottom of the scale, the engine went rough, then smoothed out, then went rough again and finally quit altogether.

The dead-stick emergency landing went okay, and no one was hurt, but the aircraft owner and I were stranded in the 110-degree desert 70 nm from the nearest town, Mandera, Kenya. We had two ELTs with us, the plane’s built-in, G-activated Ameriking system (which failed to activate) and my manual, portable ACR 406 EPIRB unit capable of bouncing a signal off the satellites.

Long story short, we were located in a few hours, trucked to a U.S. Save The Children compound in the village of Dolo, Ethiopia, rescued four days later and air-evacuated to Addis Ababa. Four days after that, when I returned to the U.S., I had a renewed interest in and respect for ELTs.

Like so many other aspects of aviation technology, the basic concept of ELTs is a fallout from the military. Used by the Air Force in various forms to locate downed airmen throughout the Vietnam War, ELTs were mandated in every U.S. registered aircraft in 1970, and those original systems were little more than radio beacons, designed to emit a continuous oscillating tone on 121.5 and 243 MHz following manual activation or a mid-level five-G shock. In theory, this would allow searchers to home in on the signal by triangulation.

Sadly, theory was more optimistic than reality. Though ELT signals were available to overflying satellites, the ELT’s signal was analog, and the transmitter, satellite and receiving Search And Rescue (SAR) station all needed to be within range of each other. Original ELTs had notoriously short battery lives, usually not more than a few hours, and rescuers often were frustrated at losing the signal just as they began to home in on a downed aircraft’s position.

Another major problem with ELTs was an alarming incidence of false alarms. The Air Force Rescue Coordination Center (AFRCC) in Langley, Va., estimates that as many as 97% of the 95,000 ELT alerts received since 1986 have been unrelated to any emergency, a result of inadvertent G activation or other equipment problems. In other words, there were over 92,000 false alarms. That’s 5,800 a year or about 16 a day.

Search and rescue is serious and often expensive business, not to mention potentially hazardous to the searchers and rescuers. SAR teams often fly in the same conditions that contributed to an accident in the first place. For those reasons, it’s vital that the AFRCC weed out phony alerts from real ones, a time-consuming process during which victims of an emergency could be in desperate need of help.

The age of Emergency Position Indicating Radio Beacons (EPIRBs) ushered in dramatic changes in SAR capabilities, all for the better. First came standard EPIRBs, transmitting with five watts of power rather than the half-watt of the old 121.5 ELTs. This increased range dramatically. EPIRBs broadcast on 121.5 plus 406 MHz, and their digital signals are available to a variety of satellites. Each EPIRB must be registered and any activation transmits contact information, so SAR authorities can track down the owner and determine if there’s a real emergency.

The latest EPIRBs are even more sophisticated devices, designed to broadcast not only the user’s identity and contact information, but fitted with integrated GPS sensors to allow transmitting the exact lat/long coordinates of a downed aircraft. Other EPIRBs interrogate the aircraft’s onboard GPS equipment for position information.

As the name implies, Geostationary Operational Environmental Satellites (GOES) maintain position 22,000 miles above a fixed location and serve a variety of functions in telecommunications, from sending down live weather photos to expediting communications. The GOES universe also listens for EPIRB activations, flying so high that they can receive signals from a huge area, nearly a third of the earth’s surface.

The bad news is that because GOES orbits at the same rate as the Earth below and therefore can’t employ Doppler shift, the satellites can’t fix position from a standard 406 EPIRB transmission. They can, however, alert an appropriate rescue communications center with encoded information from the EPIRB. If the beacon includes a GPS sensor, GOES can transmit position as well as ID code.

Search And Rescue Satellite Aided Tracking (SARSAT) satellites circle the Earth at 13,500 knots and can fix position of an EPIRB signal precisely. They fly polar orbits 528 miles up and view a moving, circular area of Earth with a diameter of 2,500 miles as they orbit. Similarly, the Russian COSPAS universe of satellites orbit at 620 miles with comparable coverage. Between the two systems, they cover every location on Earth every 30 to 45 minutes, so their response time for search and rescue applications is excellent.

Stated simply, EPIRB/GPS can pinpoint position of any signal within a 600-foot diameter circle anywhere on Earth, reducing the search area of a standard ELT by a factor of nearly 50.

The sequence of events that initiates a search with a 406 EPIRB is fairly simple. After a satellite receives an EPIRB transmission, it relays all information in the encoded digital signal to a ground station. If there’s no ground station in view, the satellite saves the message to memory and downloads it to the next station available.

The ground station then calculates the position of the EPIRB, refining the position with each subsequent pass. After processing, the ground station transmits the alert to the U.S. Mission Control Center (USMCC) in Maryland. USMCC alerts the AFRCC, where analysts attempt to determine the aircraft’s disposition. If AFRCC is unable to verify the aircraft is safely on the ground, they launch a search and rescue mission. For aircraft down off coastal waters, the U.S. Coast Guard will be alerted. Most of these steps are made considerably more difficult or impossible with standard ELTs, as there’s usually no independent way of knowing the identity of the pilot and aircraft.

For all the reasons above, the standard ELT frequency of 121.5/243 MHz will be phased out on February 1, 2009, and all subsequent SAR beacons will be confined to 406 MHz.

EPIRBs come in a variety of styles, shapes, sizes and weights, from hard mount units to portable cigarette-package-size PLBs (personal locator beacons), designed to be clipped to a belt. While there are dedicated aviation EPIRBs, marine units serve the same purpose and (perhaps surprisingly) cost about the same. Prices range from $500 to more than $2,000.

That’s not cheap in contrast to the relatively low cost of the old ELTs, but it’s a worthwhile investment if it only saves your life once.