For the past nearly two decades, Dassault, the company that makes the Falcon Jet line of business jets, has been using what it calls a “tool” in helping with relief efforts here in the United States and abroad. That tool is a specially outfitted Falcon 900 tri-jet that the company has used to provide humanitarian aid, flying families displaced by Katrina to new homes, flying doctors, nurses and medical supplies to Haiti after its devastating earthquake. It also has a record of making big contributions to help with recovery efforts.

The company points out that its contributions aren’t done in order to get positive press. In fact, we had to ask a few times to be able to share the companies efforts, which they agreed to only because our audience is pilots, and they know pilots will understand. 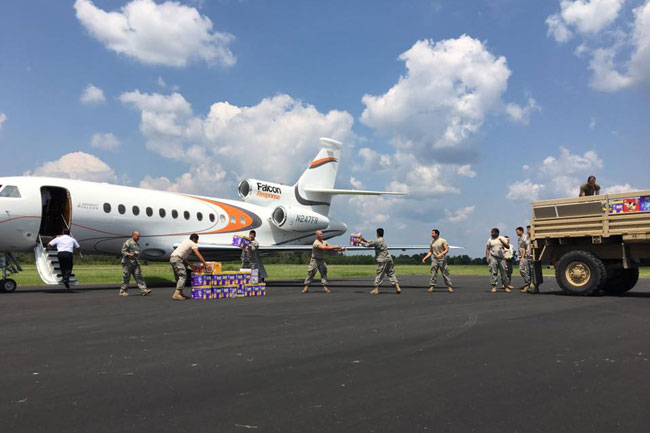 Andrew Ponzoni, senior communications leader at Dassault, emphasized that helping isn’t part of any PR effort but that “It’s part of the culture of the company.”

Here in Andrew words, is the gist of Dassault’s relief mission to Texas last week:

“(For) …Hurricane Harvey, we teamed with PALS—we selected one flight (KFRG-KORG) to fly supplies donated by the Nassau County Office of Emergency Management (MREs and medical kits). From there, we essentially turned ourselves over to PALS—we were going to fly whatever missions they needed. All of them tuned out to be from KEDC-KORG. [Austin Executive to Orange, Texas.]

“Orange was essentially cutoff due to the flooding—unless you had a really big truck, moving around was not possible. When we landed (I was told we were the second airplane in), I met the Texas National Guard Captain that was in charge at the airport.  He said they have no gas, no power, no water. On Friday night, Orange was featured in Nightline on ABC.

“Some ask in a time like this “where do our donations go?”—I was in a little bit of awe. The donations for the first couple of flights would be pulled from the airplane. Placed into a National Guard truck and then driven to the other side of the ramp. It’s there that the donations were placed right into waiting boats from the Cajun Navy on trailers or trucks and they went right out. Cases of water. MREs. Food. [It all went] right into whatever they had that can deliver. By Saturday they started to build up some inventory on the ramp. 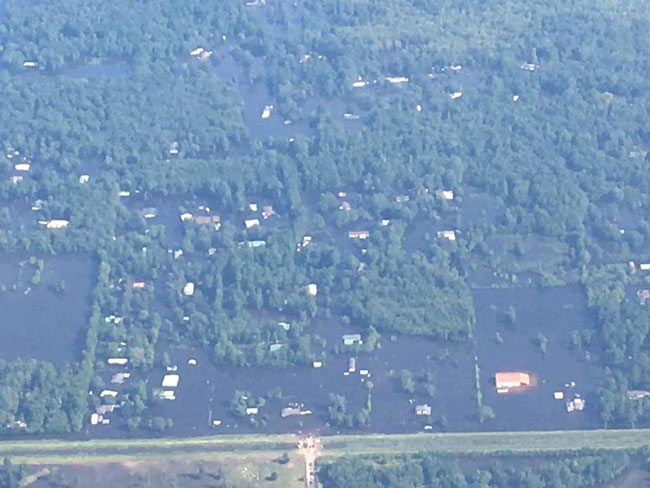 “During my four or so combined hours on the ramp at ORG, I saw maybe 40-50 airplanes. Mostly small aircraft such as Barons, 172s. Also saw some big ones—a Falcon 2000LX (not a company plug—it was the only other business jet I saw, but I understand there were others). Also saw Bluebonnet Belle—a WWII era C47 from the Commemorative Air Force. 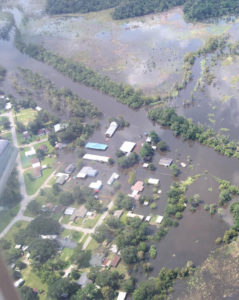 “We took our last flight late Saturday afternoon and then returned to Teterboro. The final count? About 10,000 lbs of goods moved, everything from MREs to medical supplies. Non-perishable foods such as rice and energy bars. Two pallets of water. A pallet of diapers. Clothes. Blankets. Air mattresses.

“Without the activity on the ramp, the airport appears like any other GA airport that we know. It wasn’t until we were in the air that the scope of the devastation could really be seen. Immediately upon takeoff, you can see the roads surrounding the airport were underwater—and that was it for miles. I can’t really describe it—I was very detached because of the comfort of the airplane. But, it was very gratifying to see all of the aide that GA was putting together put to work. I can personally attest that the goods that made it to ORG were put to good use.”