I was one of the first users of ForeFlight 9 as a lucky accident of having a flight-planned on the very day it was launched. As I flew along in the 182 with its still-ancient panel, I used ForeFlight to guide me along my way, picking the best altitude for the best groundspeeds, which actually seemed to work, checking on the weather as I flew over a low undercast that was making most of the airports in Alabama and Louisiana ILS-only arrivals. As I noticed first one then another new feature, I was amazed three or four times in succession. ForeFlight once again has gotten this stuff right.

We should stop being amazed by what ForeFlight adds to each successive introduction of its award winning mobile app, but so far their winning streak continues. ForeFlight 9 adds a couple of great new features, checklists (which are beautifully executed) and glide advisor, which you have to see to believe—well, screenshots anyway. At the same time, the app adds some improvements that make interacting with ForeFlight easier, and easier on the eyes, than ever. 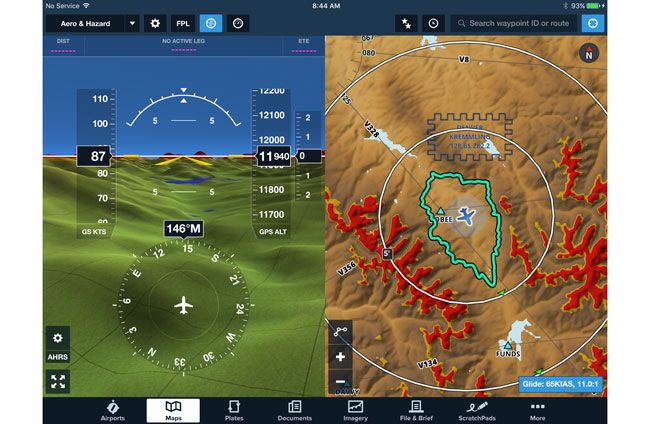 In case you missed the blockbuster announcement of ForeFlight 8, all digital data-driven maps, the app has taken its one arguable weak point and made it a strength. With FF9, the company polishes that new functionality and adds to it.

Glide Advisor should become every ForeFlight user’s best friend. When you select it, the feature draws a big amoeba around the airplane showing how far you can glide based on terrain, the winds and the airplane’s glide performance characteristics that you enter. The shape of the blob is an easily understood graphical representation of how far you can glide should you lose your one and only engine. The calculations, which change constantly and somewhat hypnotically—don’t forget to look for traffic—are based on the changing winds and terrain. So as you fly along en route instead of flicking through to the nearest airports on your navigator, you can constantly keep yourself apprised of the best options should you need to start dead-sticking it.

Another cool feature that not everybody will want or need to use is the somewhat unimaginatively named User Map Shapes tool. With this easy to set up utility you can create a shape that shows up on the main map page. The most common use will probably be flight schools in creating custom practice areas delineated by specific lat/long inputs instead of the all too common “it’s out thataway five miles or so.” The feature will come in handy for search and rescue teams, aerial fire fighters, wildlife conservation efforts and any number of other airborne services.

There are too many new features and enhancements to go into too much detail about, but you will definitely love the new nighttime themed interface….yes, I’m told that lots of people use it during the day, as I did when I first discovered it. There’s also better logbook integration, the new XM weather surface winds, and a handy notification pop up that tells you when your wireless connection goes off the rails.

ForeFlight 9.01 is available in the app store, and if you’re already a ForeFlight user you doubtless have the latest version already installed. For those of you who don’t you should check it out in the Apple App Store. The cost is $75 annually for the basic version but get the Pro version if you can swing it at $150 per year and enjoy every one of the bells and whistles.