Through my Lightspeed Zulu headset, I hear a confident voice: “Denver Center, Citation One Three Zulu Mike, vacating flight level 390 for 240, smooth ride.” Our descent into Aspen marks the conclusion of a 703 nm, tailwind-blessed trip from Santa Monica, Calif., and aside from a 2,000-foot marine layer cloaking the Los Angeles Basin, we haven’t encountered any weather—until now. It’s IMC with moderate chop, and through breaks in the clouds loom the snowy peaks of the rugged Colorado Rockies.

SStandard traffic pattern at KASE, which sits at an elevation of 7,820 feet on the southern end of a valley surrounded by 14,000-foot mountains, calls for aircraft to land on runway 15 and depart on 33.

But, today, winds are 310 at 18 knots, gusting to 28, so after requesting a circle-to-land approach on 33, tower clears our Citation Mustang for the circle. Swooping ski trails and majestic homes dot the white and green landscape below, but although I’m the passenger on this flight, it’s hard not to notice the large mountain in front of us as we turn right base. “Pull up,” commands the G1000 TAWS system. “Pull up!”

Single-pilot jet operations in mountainous terrain at a high-elevation airport flying a nonstandard traffic pattern in turbulence isn’t for the faint of heart. Throw in a screaming terrain alert, and it’s enough to rattle the staunchest nerve. But my left-seater keeps his composure and, on final, methodically states, “In a position to land, flaps to landing,” and maintains 94 knots over the numbers, extra airspeed for the gusty conditions.

Our touchdown is as smooth as any flown by a high-time professional pilot. But I’m not with one. I’m with Marty Sprinzen, who at age 57, embarked on his childhood dream of becoming a jet pilot. Until three years ago, he hadn’t even logged his first private pilot training flight; today, he jet-sets between homes in Los Angeles, Aspen and New York. How did he get here?

Created by Cyrus Sigari and Ben Marcus in 2006, JetAviva is an innovative company that assists pilots with every aspect of owning and flying a light jet. The team has completed over 125 light-jet transactions and is able to offer objective advice while ensuring a hassle-free experience for customers.

“Our clients typically fall under one of two categories,” says Sigari. “They’re either retired, self-made business owners whose lifelong ambition has been to own and operate a light jet, or they’re principals of medium to large businesses who use their aircraft extensively for the betterment of their business. The aircraft they’re stepping up from range from Cirrus SR22s and Cessna Corvalises to TBM 850s and King Airs.”

“It doesn’t take superhuman skill to fly a light jet,” says Marcus. “But it does take a tremendous investment in time, money and emotion.” In 2000, a merger took place between Forte, a publicly traded software development company that Sprinzen founded, and Sun Microsystems, which valued Forte at $1.2 billion. “I was just in the right place at the right time,” shrugs the Cooper Union graduate.

After soloing in a Cessna 172, he purchased a Cirrus SR22. “JetAviva set me up with two mentors, Craig Byrd and J. Robert Moss,” says Sprinzen. “Mossy taught me how to fly a jet single-pilot in the real world. I’ve learned intimate details about the aircraft and its systems and the best techniques for operating my Mustang in different environments. JetAviva developed my maturity as a pilot in a way that I couldn’t have done on my own.” 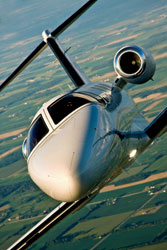 JetAviva provides all of the services necessary to determine which type of light jet is best for a particular client. The company teaches the pilot how to fly his or her new jet and place it into service. Specialized services include an 800-point ground inspection and test flight on the day of delivery as well as a jet-familiarization training program. The company also offers aircraft acquisition consulting and assistance with the sale of a previously owned aircraft. (When Sprinzen was signed off in the Mustang and was reluctantly ready to let go of his SR22, all he had to do was sign the final sales paperwork; JetAviva took care of the rest.)

We’re sitting at the one restaurant that’s open for Sunday lunch during pre–ski season in downtown Aspen, reminiscing about the morning’s flight. Sprinzen is giddy with excitement and texts friends with the proud news of the challenging circle-to-land accomplishment. The guy at the next table overhears the buzz: “You own a jet?” Sprinzen’s eyes brighten, and it’s as though the little boy from Brooklyn is here: “I flew myself here in it!” 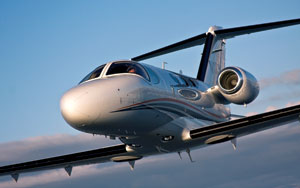 Sprinzen is a prime example of how JetAviva can make jet dreams come true; a vision that Sigari and Marcus are passionate about. The best friends immersed themselves in aviation at the age of 12, both studied aviation-related fields, and while working for Eclipse, came up with the idea to start JetAviva. “Ben and I are 26 years old,” says Sigari. “By no stretch are we veterans in the business; however, we believe in three key tenets: have fun, take care of every customer as if they were the last, and be the best at what we do. One of the unique aspects of our business is that all of our clients are fantastically successful people, both in business and in their personal lives. We spend a lot of time with our clients, and as a result, we learn a lot from them. We take the golden nuggets that we’ve seen help our clients, and try to apply them to our business and personal lives as well.”

Our flight home from the Colorado Rockies the following day is uneventful. Today, Sprinzen is a far cry from where he was a year ago, overwhelmed during the training process. “I’m a perfectionist, and when I get into something, I get into something,” he says. “I like the challenge of knowing something like the G1000 system really well, and making it do what I want, such as fly across the country. There were times when I was ready to give up, but now I love my Mustang and I wouldn’t want to trade it for anything.

“It doesn’t take superhuman skill to fly a light jet,” says Marcus. “But it does take a tremendous investment in time, money and emotion.

“The first time alone in the Mustang felt like my first solo flight all over again,” the new jet pilot continues. “I was extremely focused for takeoff and climb, and then once established at cruise, I looked around the cockpit and cabin. I thought to myself, ‘I’m alone in a jet at flight levels. Wow!’”