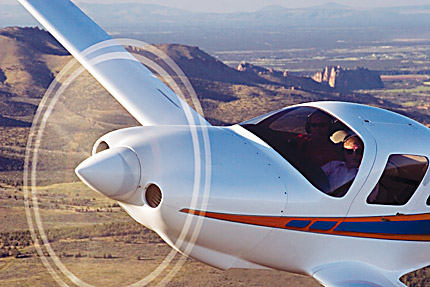 There aren’t many folks in the personal aircraft business brave enough (or perhaps foolish enough) to attempt certification on a homebuilt airplane. Curtiss Pitts may have been one of the few to do it with his S1 and S2 Pitts, and that was in a far simpler time.

Lance Neibauer never set out to certify an experimental airplane, and technically, he still hasn’t. A graphic designer with an eye for form and function, Neibauer designed his first airplane, the Lancair 200, back in the early ’80s simply because he thought he had a better idea. He certainly never would have considered certifying it or any of its direct descendants.

What he has done, however, is adapt one of his later existing homebuilts to meet certification standards. The resemblances between the Lancair ES and the Columbia 350 are more than coincidental, though the two airplanes have no common parts and share little more than the same concept and a similar appearance.

Still, Neibauer used the homebuilt Lancair ES as inspiration for the certified Columbia design. Even to him, that seems more than a little ironic considering that he never planned to be in the aircraft kit business.

A fine arts graduate from Michigan State, Neibauer grew up around airplanes, specifically the Meyers designs. “My uncle, Ray Betzoldt, worked with Al Meyers on the creation of the Meyers 145 and, later, the Meyers 200. Meyers would design the airplanes, and my uncle would help get them built.”

Neibauer loved flying, but existing production designs didn’t interest him. He felt most production airplanes were boring, me-too machines. “That was my primary motivation for starting on the Lancair 200 in the first place,” he says, “to build what I hoped would be an aesthetically more pleasing design with better performance and handling.”

Using his natural talent for lines and symmetry, Neibauer conceived a two-seat, composite airplane that was as wide as a Bonanza and almost as fast—on nearly 200 less horsepower. The first Lancair 200 was a lightweight work of art with a gross weight of only 1,275 pounds. It featured a DuPont NOMEX honeycomb structure with epoxy-impregnated glass cloth covering.
Advertisement

The wing was a minimalist 76-square-foot, NASA NLF airfoil designed by Dan Sommers of the Langley Research Center. Neibauer comments, “That first airplane was intended as a one-off machine, and I never assumed I could build a business around it. To start the process, I bought a Cessna 150, gutted it, sold the airframe and kept the engine, instruments and avionics. I wanted to see how much performance I could wring from the little 100 hp Continental O-200 engine by using an extremely light, low-drag airframe and wing.”

The answer was 167 knots (192 mph), totally obliterating the old aerodynamic rule that suggested an airplane could be considered efficient only if it could generate 1 mph for each horsepower. At a typical 8,000-foot density altitude, the little Continental engine develops perhaps 75 hp, yet the Lancair delivers a stunning 2.5 mph per horsepower. “In fact, we saw top speeds of nearly 210 mph on that airplane, but 190 was a more reasonable cruise number,” says Neibauer.

Neibauer introduced the Lancair 200 at Oshkosh 1985 and quickly had more demand than he could handle. There was so much interest in his first homebuilt airplane, “I wound up backing into the homebuilt business,” says the designer.

Neibauer quit his job, established his first company, Neico, on Santa Paula Airport, which is 50 miles northwest of Los Angeles, and immediately began improving the breed. Inevitably, the Lancair 200 led to the 235, the same machine with a 118 hp Lycoming O-235 powerplant out front. Neibauer followed up with the stretched-fuselage Lancair O-320 and O-360, featuring Lycomings of 150/160 hp and 180 hp respectively.

Meanwhile, Neibauer’s personal family was expanding at the same time his aircraft line was filling out. The designer found he needed more than two seats, so he built his own four-seat retractables, the Lancair IV and IVP (pressurized). A variety of engines could be adapted, but the top models used the relatively new Continental TSIO-550, rated for 350 hp.

These IVs offered the best performance of any homebuilt in the industry. Climb was elevated to 3,000 fpm and cruise was nearly 300 knots at 25,000 feet. While the four-place airplanes retained a deliberate family resemblance to Neibauer’s line of two-seaters, the IV had practically nothing else in common with its predecessors. It was a totally different machine.

“Anyone who thinks you can simply scale everything up to go from two to four seats doesn’t really understand the problem,” laughs Neibauer. “There are so many other changes necessary to double the number of seats, that it’s practically impossible to retain anything from the smaller airplanes other than the company nameplate.”

Never one to rest on his laurels, the designer next developed a fixed-gear version of the IVP, the Lancair ES and, later, the ESP, again a turbocharged and pressurized version of the same airplane. Along the way, he also designed a fixed-gear homebuilt that could use the comparatively inexpensive 200 hp Lycoming IO-360 engine. The design was dubbed the Legacy.

Despite his success in the homebuilt field (or perhaps because of it), Lance couldn’t help but notice that there was nothing new in the production ranks. “There’d been no all-new production singles certified since the Piper Malibu,” says Neibauer. “That had been a very popular airplane, but we felt we could do better. It seemed there was a definite hole in the market for an airplane that would incorporate composite design, modern avionics and improved performance.”

Accordingly, Lancair began evaluating proposals from some 100 different economic development councils from all over the country, including several from Alaska. “The pipeline was winding down up there,” says Lance, “the oil companies were laying off, and cities such as Anchorage and Palmer were looking for new businesses to bring jobs to the area.”

Neibauer flew up to take a look at South Central Alaska. He really liked the area around Anchorage, but in the end, he decided to establish the production company in nearby Bend, Ore., only 10 miles from Redmond.

Neibauer and his team launched an effort to design and build a production airplane that would draw on the company’s experience with proven homebuilt designs. “Given our druthers, we would have adapted a production version of the IVP,” Neibauer explains, “but that’s a very complex airplane with a high-speed wing. It probably would have demanded significant modification that would have seriously compromised performance, and it would have been a bear to certify. As a result, we elected to go with something simpler, a modified version of the ES.”

At the time, the FAA was encouraging the development of new aircraft for the Small Aircraft Transportation System, better known by its inevitable abbreviation, SATS. To that end, the feds were offering certification under what it dubbed “simplified criterion.”

“We took a serious look at the ‘simplified’ certification,” Neibauer comments, “and decided it was too restrictive. It wouldn’t have qualified for reciprocal certification overseas, and there were some other limitations we didn’t like. As a result, we elected to go with a standard Part 23 development program.”

Lancair Certified Aircraft was created specifically to handle the expanding company’s production aircraft requirements, but Lance acknowledges the challenges of certification left little time for speculation about anything beyond the basic, normally aspirated Columbia 300. “I designed the 300 to accept the Lancair IV retractable gear, and we hoped we’d someday be able to adapt the same basic airplane for turbocharging. Initially, though, I had a tiger by the tail just trying to get the first airplane certified. Money was always a problem, and higher performance versions were the farthest things from our minds,” Neibauer remembers. “Everything cost more than we’d planned. There never seemed to be enough cash to cover development expenses.”

The problems of certification began demanding more and more of Neibauer’s attention, and he found he had less time to spend on his first love, the homebuilt company. Eventually, he decided to sell Lancair to Joe Bartels, an enthusiastic Lancair IVP builder who’d developed an air-conditioner for the airplane and had been interested in acquiring the company for several years. This left Neibauer free to work on converting the 300 to the all-electric 350 and the turbocharged Columbia 400. To help separate the two companies and dispel any belief that the Columbia was a homebuilt, Lancair Certified became Columbia Aircraft in 2003.

The top-of-the-line, twin-turbocharged Columbia 400 features the 350 hp Continental TSIO-550 engine derated to 310 hp. “The derating has several advantages,” Neibauer explains. “We can maintain full power all the way to 25,000 feet, and when we get there, we can throttle back to 75% of the 350 hp limit, not 310 hp. That means we can still pull 263 hp or about 85% of the derated horsepower at cruise. That allows us to cruise at speeds of 230 knots, and that’s with fixed gear.”

As one who has been designing futuristic airplanes for 20 years, Lance Neibauer inevitably faces questions about what’s next. Though he’s retired from day-to-day operations at Columbia Aircraft, he still owns a large block of stock and maintains contact with Columbia officials, occasionally consulting about future products.

“We’re primarily just trying to deliver the products we have now, rather than concentrating on new designs,” says Neibauer. “Remember, though, the Columbia line was designed with the Lancair IV retractable gear in mind for some time down the road. Also, it’s important to note that both the Lancair IV and ES offer pressurized versions, if that gives you any hint of what might be next.”

Let’s see, add 15 to 20 knots for retractable gear, and you just might see something like a Lancair 500 delivering 250 knots while cruising in pressurized comfort at 25,000 feet. Then again, there’s also the possibility of a turboprop version…