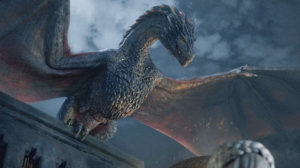 Okay, let’s say you can tame a dragon. But could one really fly? And if so, could you ride it? We have answers!

HBO’s hit series Game of Thrones, about a mythical world (in which just about every character has a British accent, go figure) that’s going through a series of political upheavals, as separate kingdoms try to get the upper hand, often through clever political maneuvering but more often through horrific violence, including warfare.

There aren’t any guns in this world, but ingenious weaponry abounds, everything from barrels of liquid fire to giant crossbows, and, yes, there’s swordplay to spare.

Then there’s the nuclear option, Dragons. These aren’t the friendly Puff kind of dragon but giant, angry, fire breathing flying reptiles. For them, no one has an answer, well almost no one. Drat that evil Night King!

We know it’s a mythical world populated with mythical creatures, like giant zombie bears with an attitude, but being pilots we had to ask ourselves the questions, could a dragon this size really fly, and if it could, would anyone be able to ride it?

To answer those questions, we looked no farther than paleontology and hunted for the biggest flying dinos ever. Yup, Quetzalcoatlus, the giant flying lizard with a wingspan a third again bigger than a Cessna 172 four-seater. Now, having a big wingspan doesn’t mean that Quetzals could carry a big payload, but they didn’t have to carry any fuel which is good, as avgas was hard to find at the time, but, yes, they could fly. Could larger reptiles have flown? Sure, though one could throw in all kinds of complications, but in theory, the aerodynamics work.

And on Game Of Thrones the flight dynamics are incredibly lifelike. If there were to be a flying dragon with a 120-foot estimated wingspan, it would have to fly just like that.

One stumbling block is the fire, though. Think of a small jet, let’s say HondaJet sized, a six-seater, or so. Now imagine putting a huge turbojet engine on its nose with the thrust pointing forward, which is essentially what a dragon is like, right, and it’s not going to be flying any more. That said, with its giant flapping wings, it could recover, and it can essentially hover, too. (Yeah, we all want one.) So is the whole belching waves of molten destruction a non-starter? Maybe, maybe not.

But Could You Ride It?

Okay, here’s where we part ways with the show. The long and short answer are both “No way!” Here’s why.

In the show, Daenerys Targaryen, known as the Mother of Dragons, learns to ride the beasts—she has three of them—when they are smaller, and she does it simply by hopping aboard and holding on. Right.

We read the opinion of one bull rider saying that if it moves, he could ride it, to which we say, bull. These giant dragons are, one, too big to grip with your legs, there’s no saddle (riders must hold on) and the acceleration forces, just flapping their wings moves their bodies up and down like 30 feet in a heartbeat—are unfathomable.

Even if a pilot could hang on when the G forces were pressing your butt down into your seat, the negative Gs would be a deal breaker. Anyone who’s ever flown aerobatics knows this instinctively. Think about it: Would you fly an open-cockpit aerobatic plane with no seat belt and do repeated high-negative G maneuvers (you know, the kind that lift you out of your seat)? The answer is, you could do only one. Otherwise, the effect of even mild flapping would be the equivalent of an old-fashioned, monster-based ejection seat. And we didn’t notice the riders wearing any parachutes.

Okay already, we know how they hang on, magic, right, the motive force behind so many of the show’s disruptive technologies, from bringing people back from the dead to assuming their perfect form in order to… well, use your imagination!

So even if the flying fire-breathing dragons and their cool and collected riders stretch the science, they are undeniably fun to watch and, okay, dream about flying, too.

One thought on “Game Of Thrones Returns, And It’s All About Flying!”