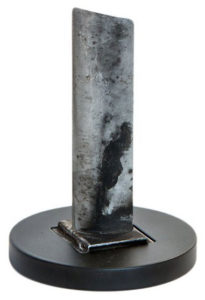 The F-4 Phantom II Engine Blade ($120) is a little piece of aviation history. This isn’t a replica—it’s the actual blade of a General Electric J79 turbojet engine that once kept a McDonnell Douglas F-4 Phantom II fighter jet airborne. As one would expect from a piece of metal that spent time as part of an engine, each blade is unique in appearance.

First flown in 1958, the Phantom II was used extensively in the Vietnam War. More than 5,000 of the supersonic, twin-engine fighters were built. It is the only aircraft to have been used by both the U.S. Air Force Thunderbirds and the U.S. Navy Blue Angels.

Each blade is cleaned and polished before being mounted on a circular aluminum base. The base is finished in matte black. Base and blade together measure approximately 4 inches tall and 3 inches in diameter.

Learn more at My Pilot Store. 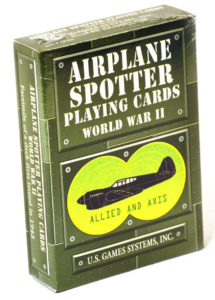 The Airplane Spotter Playing Cards ($12.99) are a standard 52-card playing deck with a practical aviation twist. Spotter Cards were first issued in 1943 to train WWII ground observers on aircraft identification. Like the original version, each card of this sturdy reproduction deck features three views of an aircraft, with the front, side and bottom of the plane pictured as it would likely appear to observers.

Aircraft pictured include 52 different Allied and Axis aircraft from from the United States, Great Britain, Germany, Japan and Italy. They are mostly divided by suit: Spades are U.S. planes; Diamonds are German aircraft; Hearts are British; Clubs are 9 Japanese planes and 4 Italian planes. The cards measure 2.5 inches by 3.5 inches. They are plastic-coated for durability. 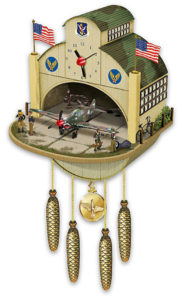 The handcrafted P-40 Flying Tiger Airplane Hangar WWII Tribute Wall Clock ($179.99) is a beautiful addition to any historically minded aviator’s wall. This cuckoo clock has been constructed to resemble a WWII-era hangar, complete with uniformed pilots and a camo-painted Flying Tiger P-40 with its iconic teeth on display. At the beginning of each hour, the plane taxis out of the hangar. Instead of the traditional “cuckoo,” the chime has been designed to sound like an (okay, much quieter than the original) Allison engine. No need to worry about it keeping you up at night, however—the chime has a volume control and can be completely silenced when desired.

The clock has four cuckoo-clock-classic pinecone weights and a brass-toned metal pendulum. The pendulum is decorated with a prop-and-wings insignia. The clock runs on 3 AA batteries and measures 18 inches high (including the pendulum and weights). Each limited-edition clock is numbered and comes with a certificate of authenticity.

Learn more at the Bradford Exchange. 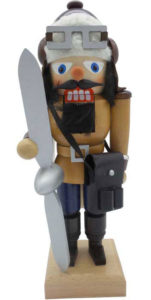 Looking for a classic holiday decoration with some aviation flair? The Pilot Aviator Nutcracker ($99.99) just might fit the bill. Decked out in flight goggles, an aviator cap and bag with a rolled-up chart poking out—no GPS for this old-school aviator!—this nutcracker is ready to celebrate the coming holiday in the sky. It also holds a silver propeller.

Much of the wood is finished to let its natural color and grain shine through. It is 9.8 inches tall and carved from basswood. Each nutcracker is made in Germany only at the Christian Ulbricht company in the Ore Mountains. The company has been handcrafting nutcrackers and other wooden toys since 1928. 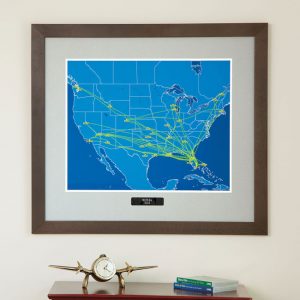 Looking to commemorate a special flight—or even a year’s worth of them? Sporty’s and FlightAware are offering a Custom Flight Track Map ($499) that will let you do just that. First, pick an N-number—just one per map. The map will show the actual IFR flight tracks within the continental U.S. for that plane during the selected time frame. A date range of up to a year can be designated, beginning in 2007. It’s not just the routes, though—all departure and arrival airport identifiers are shown as well.

The map comes framed. It includes a plaque that can be engraved with the N-number and up to two lines of customer-selected text. There are also custom framing options available. The framed map measures 26 inches high by 29 inches wide. If it’s meant as a gift, this one requires a little pre-planning: shipping takes up to a week. 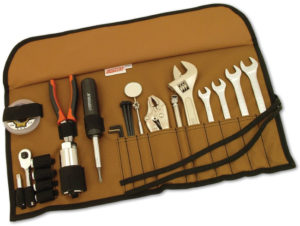 No cross-country flier’s flight bag is really complete without a good set of tools to handle minor maintenance issues that might crop up away from home. This Pilot’s Tool Kit ($94.95) is well supplied for most of those do-it-yourself moments. And at only 3.5 pounds, it won’t even add too much to the weight-and-balance sheet.

The kit comes stocked with a set of combination wrenches, hex wrenches, 8-inch adjustable wrench, locking pliers and 6-in-1 screwdriver. It also has a tire pressure gauge, socket set (including a spark plug socket) and diagonal cutters.

Still not impressed? There’s more. The kit includes 30 feet of 0.032-inch aviation-grade safety wire, cable ties and a telescopic mirror for checking out hard-to-see trouble spots. It all rolls up neatly into its carry pouch.