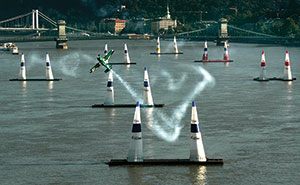 It’s hot in this race plane…even at 1,000 feet…or is it just me? My mouth is dry and my heart is racing as I watch the competitor before me twisting his way through the track. Is there anything to learn by watching him? Which way is his smoke blowing? Have I planned my flight according to the current wind conditions? It’s a little too late for big changes in my plan, so just a tweak here or there is all I can do.

My fellow competitor finishes only 30 seconds before my call to start. Seat belts tightened, helmet secure…one final check. Rpm: 2,950. Throttle: what do you think? Now, let’s make a big, low-G circle to minimize speed loss during my turn. Budapest is a “fast track,” which means that I need every last knot as I pass under the historic Chain Bridge for the start of the race.

That’s right, under the bridge! It’s only 27 feet from the bottom of the steel curtain to the river beneath it. Then the call comes from the race director, “Number 99, Michael, cleared into the track…smoke on.” I make one last big, gentle turn as I start my run in. As I complete the turn, I focus on a small orange buoy approximately 100 yards short of the bridge. According to the rules, my Edge must be wings level as I cross the buoy, which gives me approximately two seconds between the buoy and my pass beneath the bridge.

I’m never really sure exactly when I pass under the bridge because I’m not ever looking at it. My focus is on the first gate, which is closing in at over 350 feet per second. The only sign that I have passed under the bridge is the instant a very quick shadow crosses my canopy. Sometimes there’s a good shot of turbulence too, depending on the wind.
Advertisement

But as I approach the first gate, my focus has already shifted to the second gate. At this speed, if you’re not way ahead of the airplane, then you’ll be out of position and not even have a chance to make it through the next gate. That’s a way of life in the Red Bull Air Race. Be ahead of the airplane, or you’ll find yourself hanging onto the tailwheel so far out of the race that you shouldn’t have even bothered to show up.

Here comes the tight 220-degree turn. The G will be immense, and for a long duration, so get ready…deep breath, tighten the legs and abs. Turn and go for it! 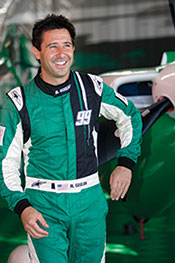 The G-meter is probably somewhere around 10 or 11, but I don’t have enough time to look. Where’s that gate? The G is too much to move my head while turning, so I just pull and “hang on” until the gate comes into view. I hope my wind planning was accurate, because there’s no time to correct once the turn is complete. You either planned it perfectly or you hit the gate and incur a 10-second penalty. Ten seconds may not seem long in everyday life, but it’s an eternity in the Red Bull Air Race—if you hit the gate, you might as well start thinking of packing your clothes for the 11-hour flight home.

Here comes the last gate… Got through it perfectly. Now for that bridge…again. This time, I must turn, descend and go below it—all in less than three seconds.

Made it! The race director calls my time over the radio, and it’s on to the Super 8s, the last round before the finals and another date with the bridge. As I exit the box, I pull up and perform an aerobatic maneuver—sometimes a series of snap rolls on a 45-degree climbing line, sometimes a tumble at the top of a loop—to say “thanks” to the 700,000 fans cheering me on from the riverbank. What a race, what a life. I’m one lucky guy!!

Michael Goulian has flown air shows for many years in his Castrol Aviator Extra 300SHP. He has been on the Red Bull Air Race circuit since 2006, flying in his Extra and, more recently, an Edge 540. Visit www.mikegoulian.com and www.redbullairrace.com and become a fan on Facebook (search: Mike Goulian Airshows).