You read the accident reports, hoping to learn something from someone else’s troubles. Often, I imagine, you’re left with a nagging sense that things just don’t add up. Why did the highly experienced pilot do that? Why didn’t the CFI grab the controls and take over? The answers might lie in a kind of stall from which few pilots are trained to recover—what I like to call the “mind stall.”

I was a student pilot on one of my solo cross-country flights when the venerable Cessna 150’s little Continental engine that could became the engine that couldn’t. I was flying at about 7,500 feet MSL over the mountains between my home base in Santa Paula and the vast California Central Valley, but only about 500 feet AGL when the engine began to sputter and the RPM dropped precipitously to barely above an idle.

The engine was running rough and the only thing I could think of was that somehow, despite the pleasantly mid-70s temperature, I must have picked up carb ice. When I pulled the carb heat I knew that things should get rougher before they got better, but there was no effect at all. The terrain below was beautiful but ragged and inhospitable, and I was rapidly losing altitude. Eyes darting back and forth from the instruments to the ground, I could see no flat spot anywhere.

Gently pulling back on the yoke only seemed to decrease engine RPM further, and the controls got mushy while the airplane sank further. On the brink of a stall, I managed to remember something I thought I had read in Langewiesche’s “Stick and Rudder,” something akin to “there are few emergencies that can’t be solved by pointing the nose down.” Sure enough, as soon as I pushed the nose toward the earth, the Continental jumped back to life.

Now I had enough thrust to continue to move forward, but I was still descending and the terrain kept getting closer. I tried to find a sweet spot where I had enough airspeed to fly slowly and maintain altitude, but I couldn’t, so, sweating profusely, I spent the next 15 minutes or so finding my way to the other side of the mountain by dipping the nose just long enough to regain some momentum, then lifting it, creating an airborne porpoise. Once I reached the other side of the mountain and I was able to fly lower, the airplane acted like my dog when, upon arriving home to find she had gotten into the garbage, pretended the whole thing never happened. 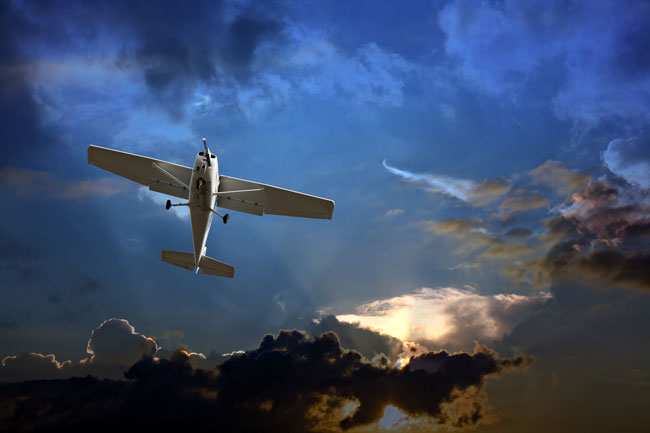 I de-briefed those frightening moments for months afterward. Reactions ranged from a friend who can put together engines blindfolded handing me a note with the word “stoichiometry” on it, to a commercial pilot acquaintance who looked aghast and said, “Your instructor let you fly over the mountains in a Cessna 150?” When I described the incident in detail to my instructor, a grizzled pilot who learned to fly shortly after the invention of fire and was a walking aviation encyclopedia, all he said was, “Yeah, those 150s ‘ll do that.”

Understanding what happened to the airplane was one thing, but understanding my own reactions was another. As the 150’s engine began to sputter and the RPM gauge plummeted, my fear went through the roof and, as a psychologist who has dealt with anxious clients throughout my career, I recognized that I was unable to think clearly and dangerously close to panic.

Panic is an exaggerated form of the fight-or-flight response, in which the perception of immediate danger triggers a cascade of physiological and psychological responses. The brain registers fear in the amygdala, which signals the hypothalamus to release a flood of hormones that charge the body for either a fight or a flight from the danger. Heart rate revs up, digestion slows, blood vessels that feed muscle widen while others constrict, pupils dilate, the bladder relaxes, hearing becomes dulled, and vision narrows. A full-blown panic attack can include hyperventilation, dizziness, nausea, trembling and even difficulty moving.

Psychologically, people in highly anxious situations begin to see the world negatively; a glass previously half-full now looks half-empty. Confusion sets in, and people begin to believe that they can’t control things they actually can. There is, naturally, a sense of impending doom, which—although sometimes realistic, can distract you from the task at hand of flying.

While there are no cockpit voice recorders in most general aviation airplanes, we do have some ATC recordings of transmissions between GA pilots and controllers, and many of these reveal panicked voices as pilots struggle to maintain control of their airplanes. It’s certainly understandable; panicking in the face of almost certain danger is a normal thing that humans do. Flying, however, isn’t pre-programmed into our heredity, and pilots must train themselves to relax in the face of danger.

When operating in any potentially dangerous situation, a certain amount of fear is a good thing. Shortly after World War II, psychologists compared the pre-service inkblot tests of those fighter pilots who came back from the war alive to those who weren’t so fortunate. The only quality that distinguished the two groups was the amount of anxiety demonstrated by the pilots. Here comes the surprise—the pilots who were more anxious entering the war not only had an equal number of kills, but also were more likely to survive. 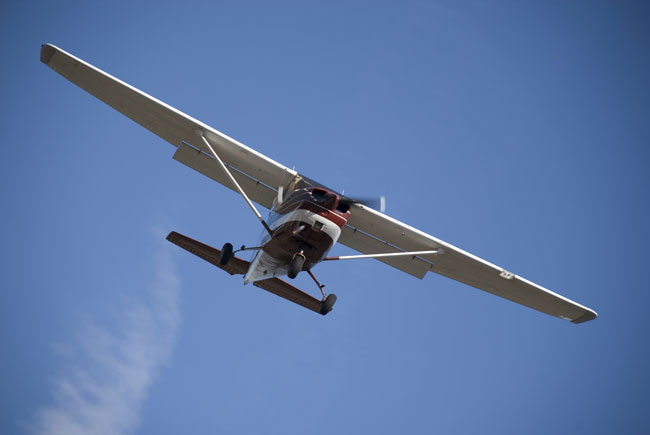 Fear, anxiety and panic seem to function along the lines of the classic inverted U-shape curve, in which the absence of fear ends up being a bad thing, a moderate amount is best, and a large amount is, again, a bad thing. Having no fear while engaging in a dangerous activity leads to the kind of overconfidence that puts pilots where they shouldn’t be, doing things they shouldn’t be doing. You’ve heard it a hundred times: There are old pilots and bold pilots, but no old, bold pilots. At the same time, too much fear leads to panic, which results in the inability to problem-solve, over- or under-control the airplane, and forgetting the fundamentals.

Back in the 1950s, the South African psychologist Joseph Wolpe developed a technique called “reciprocal inhibition,” which is a fancy way of saying that it’s impossible to relax and panic at the same time. Panic can be “counter-conditioned” by breathing deeply, because slow, deep breathing cues the body to relax. The word “breathe” should be added to all emergency checklists before and between each item.

While panic seems to arise automatically, it’s actually a response to a quick assessment of danger, accompanied by thoughts such as “I am going to die…. I can’t handle this…. I don’t know what to do…. There’s no way out….” Just as someone can learn to breathe deeply in order to counter their physiological responses, one can mentally rehearse thoughts of competence in the midst of an emergency.

Mental rehearsal is a powerful tool. In a classic sports psychology study, researchers divided a high school basketball team into two groups. One group practiced actual free throws, while the other group stood at the free throw line, closed their eyes and imagined making the shot. Remarkably, both groups improved equally.

Confidence in your own stall recovery ability isn’t enough, because typically pilots practice stall recovery in a safe environment and are able to anticipate what’s going to happen. In a “real” emergency, we’re taken off-guard and behave differently.

While preparing to be surprised seems like a contradiction, it can be done—not unlike going on a blind date and preparing for any outcome.

Close your eyes and imagine yourself tumbling through severe turbulence in IMC, barely able to read the instruments in front of you. Imagine complete engine failure, as well as other untoward scenarios, and if you’re really good at imagining it you might even be able to create the sensation of fear. Now, take slow, deep breaths and start the conversation. Remind yourself that you’re the pilot-in-command—of yourself. Tell yourself to carefully assess the situation and take the steps you have already practiced in your training. Imagine them, and imagine yourself recovering.

I was fortunate to survive my brief encounter with a loss of power, and was able to find my way back in the saddle in a short period of time. Yet, in retrospect, I realize that my focus was so narrowed that I missed some things that might have saved my life had I actually crashed (such as dialing in an emergency squawk). But I did remember to slow my breathing and talk to myself, and that might have contributed to the beautiful moment when I made my last landing of the day.

You can read more about psychology and aeronautical decision making in our article Risk Management, Again, Really?