The most popular flight simulator in the world is X-Plane, but for those folks who don’t want to be tethered to their computer, there’s a powerful and rewarding alternative, Infinite Flight, a flight sim you can play on your phone.

When Infinite Flight’s co-founder and chief developer Laura Laban talks about her company’s app, she beams with pride. After you try it, you’ll see why. Laban, a tall, self-possessed woman with blonde hair and an air of elegance you’d more expect to see in the fashion world, is herself a pilot. She owns and flies a American Champion Scout and was showing off photos of herself sitting in a CubCrafters X-Cub at the show. Laban is clearly as passionate for the real thing as she is for the virtual flying experience. 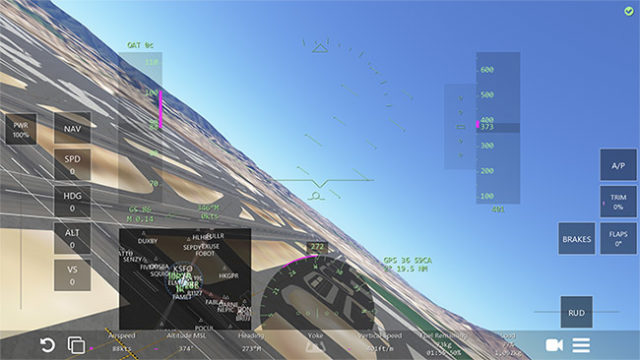 Laban started working in digital realms when she was younger and living in her native France—she is French by birth but an American citizen and FAA licensed pilot. It was while she was working at the graphics giant NVIDIA in California that she teamed up with her future fellow Infinite Flight co-founder, Philippe Rollin, and quit her very good job in high-tech to concentrate on the app. Her parents voiced their concern about their daughter’s bold plan by asking, “What if it doesn’t work?” Laura always answered simply, “It’s going to work.”

And it has. Infinite Flight is the number two seller in the App Store in the racing category, which includes some stiff competition from some impressive auto racing sims.

Infinite Flight is a flight sim game, but “game” undersells the stunning realism and great flyability, all achieved without the use of any physical controls. To control the plane, simply tip your phone this way or that. It’s totally intuitive. The throttle is located right where you hold the phone with your left thumb. Slide it up to go zoom, down to go thump, thump. It’s a blast to fly it.

Flying solo on Infinite Flight is a blast, but a core feature is its multi-player capabilities. People from all over the world fly in simulated ATC environments, with live ATC, courtesy of other Infinite Flight users. There are, in fact, many thousands of users—the company’s Facebook page has a quarter million followers, and many of the virtual flyers are immersed in the airline world, flying long routes and doing their best not to run out of fuel over the Atlantic.

The early game—the code was at first written for the Windows phone of all things–and since then Infinite Fight has taken off with the ever-increasing power and memory of phones and tablets, allowing the app to grow into what it is today, which Laban says is a level she originally imagined when she first envisioned the game. There’s almost no latency, and the new displays showcase Infinite Flight’s rich, worldwide scenery. Infinite Flight is, indeed, the only flight sim app that can make that claim.

Infinite Flight, which costs $4.99 for the app on the App Store, is hugely popular because it affords users a phenomenally realistic flying experience. Like many apps it has a (somewhat pricey) Pro Version ($9.99 per month or $79.99 for a year) with hundreds of other functions and dozens of additional planes.