Everest was meant to be climbed and the Antarctic explored. Pushing boundaries is what we do. People are motivated by lots of things—fun, money, the chance to be the first, to prove something to themselves or others, or just “because it’s there.” So, one might ask why would any sane person want to cut a ribbon with a turning propeller while flying 20 feet above the ground upside down? It’s a fair question, but I would reason that the fact that I’ve never questioned the sanity of doing an inverted ribbon cut makes me a perfect candidate to do it! My motivations were all of the above and I craved the challenge. A nice plus was that I would be the second woman in history to do it after Betty Skelton, and I never mind coming in second to that amazing woman who accomplished so much in motorsports, and always with grace and finesse.

Barnstormers have been cutting ribbons since the 1930s. Pilots like Von Hagenburg, Ernst Udet and Count Cantacuzino were picking up hankies with a hook on their wingtip in front of thousands of spectators, but I’ve always been curious about who was the first to do it inverted. It might have been Ernst Udet, that glamorous and complicated German WWI ace who barnstormed across Europe and the U.S. between the wars. (If anyone has evidence that someone else did it first, please let me know). The first American was undoubtedly Vincent “Squeak” Burnett, who performed the inverted ribbon cut in his Travel Air 2000 in the mid-1930s.

Between the wars, the European and American barnstormers traveled the circuit together and shared flying stories, but unfortunately war has a terrible way of putting an end to any fun, and airshows didn’t pick up steam again until the ’50s and ’60s when pilots like Bill Adams, Tex Rankin and Marion Cole added the ribbon cut to their Stearmans and Great Lakes acts. Later, Ed Mahler, Art Scholl and Leo Loudenslager were known for them, and today you might find one or sometimes two performers doing them at an airshow—myself, Skip Stewart, Mike Wiskus, Greg Koontz and a handful of others.

Some of the more notable ribbon cuts were performed by Jimmy Franklin cutting a ribbon stretched between two Coke cans with a hook on his vertical stab and Manfred Radius being the only person to have ever done a ribbon cut in a glider. Most performers perfect cutting the ribbon in only one airplane, but Marion Cole who was in a league of his own, said: “I started doing the inverted ribbon cut in a clipped-wing Cub in Panama City, Fla., in about 1950. I had done it through the years in a lot of different types of airplanes. Had even done it in my Stearman with a man out on the wing. Of all the airplanes, the Super Decathlon was probably the easiest because it would trim out so well and you had good visibility. Probably the worst was the aerobatic Bonanza.” 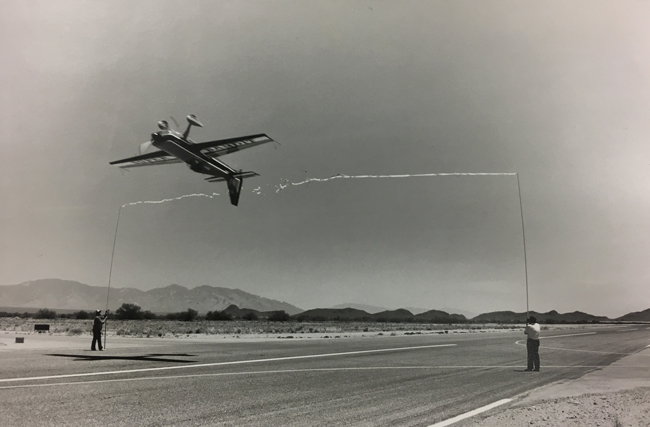 How does anyone learn to do an inverted ribbon cut? Do they just wake up one day and decide to string a ribbon between a couple of poles and go for it? Like anything extreme, the ease of doing something right is clearly misleading to the observer. There are no shortcuts to skill. Flying low level inverted is a methodical process and takes a lot of practice. When you start flying that close to the ground, the margin for error goes to close to zero. At 200 feet and below, the horizon disappears and you have to pick up other cues. I took it a step at a time, gradually flying lower with rolls and half Cuban 8’s, maneuvers I knew I wouldn’t screw up, until I felt comfortable with the low-level sight picture and the sensation of “ground rush.” After I became comfortable with the sight picture, I began making inverted passes down the runway, using a windsock as a reference. Still, I knew that until I had a ribbon strung across the runway I wouldn’t be able to visualize the sight picture for an inverted ribbon cut. Meanwhile, I asked everyone I knew for advice.

After I learned how to set up the poles (Bob Herendeen helped me order swimming pool cleaning poles and set them to 22 feet high), we stretched surveyor’s tape across them with crepe paper hanging off the middle (pretty much how I still do it today). It was easy to find a couple of volunteers to hold the poles (brave men!), even though I told them it would be my first attempt. I also made sure I had someone ready with a camera. I wanted to document it in case I didn’t like it and never did it again.

The day arrived. Lining up on the runway in my Extra 230, I rolled inverted and accelerated down the runway toward the poles and cut the ribbon right in the center with my prop. Later that night, I kept reliving that strange, exciting and extreme moment where I felt like I was accelerating, faster than time, even outrunning it. I can still see the ribbon bounce off my canopy, almost in slow motion. I’ve done the ribbon cut hundreds of time since then, but it has never felt so slow and visceral while moving so fast that I was leaving the past behind, and maybe I was.

Today, I rely on my crew to set this up and keep me safe by setting up the poles at our predetermined spot. For example, we’ll set them up either in the middle of the runway where there’s a white line or on the edge of the runway where I have something straight to line up on. If the 500-foot line, the closest we’re allowed to fly near spectators, is in the grass or on dirt, we’ll find red construction cones and line them up to help me with orientation. My good friend Andy Irwin, who crews for me at Sun ‘n’ Fun and Oshkosh, tells me the hardest part of his job is keeping pole holders focused when bringing them out to the runway. We give everyone a good briefing, but it’s exciting to walk out to the runway and he tells them, “No cell phones! No cameras! Look at me, not at Patty!”

Sometimes you have to make the decision not to do a ribbon cut. At the recent Stuart Airshow, the airshow box was wedge-shaped in between trees on either end, and because of strong winds and turbulence, I elected not to do it. At a show in California a few years ago, my crew questioned whether I should attempt my ribbon cut with the strong winds, but since the wind was straight down the runway, I said, “Yeah, let’s go for it.” But when the performer ahead of me came back with a bent pole, I realized my crew was right. One of the hardest ribbon cuts I’ve done was at Reno where it was a 30-knot crosswind to the runway so I had to get the crab just right. On the other hand, I just flew what has to be my favorite, performing the official ribbon cutting for the new grass runway at the Lakeland Aero Club’s High School Flying Club. The kids from the Central Florida Aerospace Academy were there for the grand opening, and I made sure the crepe paper I cut was in their colors.

There’s actually a method to the madness of the low-level maneuvers at airshows. In the early days of airshows, the ground acts—batman skydivers landing, motorcycle stunts, wingtip hanky pickups and such—were designed to bring people in the “gate.” Even today, there’s always a group of people who don’t want to pay the cost of a ticket or prefer to sit outside the gates on the hood of their car and watch the show. We call them freeloaders. They can watch the aerialists, but they still can’t see the ribbon cut!

I don’t know why we want to fly low; I guess it’s because speed and motion close to the ground are exciting, and, of course, because we can. Is it dangerous? It’s not as dangerous as it looks. For one, the airplane is going fast, so you have options. If something doesn’t feel right with the Extra’s world-class roll rate of 400 degrees a second, I can roll right side up and be in a position to climb and land or assess the situation just as I would if I were upright. I have no idea how many ribbon cuts I’ve done, but even after doing them for so many years, I always take it seriously.

The sensation of being low level over the runway inverted still feels fast enough that I can’t see the blades of grass on the side of the runway or cracks in the pavement. I have to focus on the line and look past it at the same time, looking for the ribbon. There’s no thought, only action and total concentration. My mind is in a total state of flow—the ultimate tunnel of love, and maybe that’s what I like best about it. My life in airshows wouldn’t have been as satisfying without it, and hopefully it’s adding something to my performances. Plus, knowing that I can’t screw up is part of the attraction; it’s one of those ultimate moments where I’m truly alive.