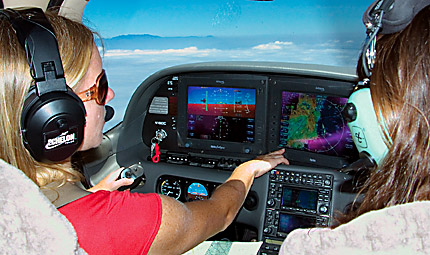 According to Cirrus, the all-glass panels in their planes make learning to fly easier and safer than with the round gauges that pilots have used almost since the beginning of aviation time. We weren’t so sure, so we put their claims to the test. I was to earn my private pilot license in a Cirrus SR22.

All of my previous time had been logged in old taildraggers, so to have a reference point, I switched to training in a trusty, time-tested Cessna 172. After completing enough instruction to solo several times, I then moved into the SR22. Transitioning from a forgiving 160 hp student trainer to a high-performance 310 hp aircraft was questioned by some of the old-timers. On more than one occasion, experienced pilots told me I was asking for trouble. “That’s way too much plane,” echoed all around. I began to have my reservations.

During my first lesson, however, my fears were quickly overridden by awe. Cirrus boasts that its next-generation airplanes are paving the way for the future. Well, the future looks good! With an interior that screams “sports car,” the new Cirrus comes standard with an
Avidyne Entegra glass panel, a side stick fit for a fighter pilot and even an iPod hookup. Sitting left seat in this $350,000 state-of-the-art wonder, I started to feel better about my decision. Besides, if it’s good enough for Angelina Jolie…

Preflight inspection on an SR22 is standard, except of course for the unusual ballistic parachute system. (In the event of a severe in-flight emergency, pull on the overhead red handle, and a solid-fuel rocket will launch a 55-foot parachute from the aft fuselage.) The checklist instructs you to simply remove the handle’s pin, and the system is armed. As a student pilot, the additional safety is comforting, although the manual’s warning that you’ll meet the earth with “the equivalent of ground impact from a height of approximately 13 feet” puts everything in perspective.

On the ground, visibility was excellent. Liz DeStaffany, my instructor at Santa Monica’s Justice Aviation, reminded me again and again to stay off the brakes to avoid overheating them. I hadn’t given much thought to this in the 172, and it was a hard temptation to resist. Ground maneuverability was excellent, thanks to a castering nosewheel. The aircraft can just about turn around on a dime, a nice feature when faced with the alternative of pushing a not-so-light (3,400-pound gross weight) aircraft into its tiedown spot.

The true test began on the takeoff roll: smooth application of power and right rudder! What qualified as a lot of right rudder in the 172 didn’t come close in the Cirrus. The torque generated by the 310 hp Continental IO-550-N driving a three-blade Hartzell propeller demands a great deal of rudder to hold centerline, but it’s easily managed. The wheels left the ground and we climbed powerfully and decisively.

As is true for any high-performance aircraft, there’s more going on in a shorter amount of time and at higher speeds than in a less complex airplane. This can seem overwhelming at first, especially to a student. The aircraft cruises at 185 KTAS, but for training purposes, we flew at 55% power.

For the uninitiated, the Avidyne Entegra flight management system can appear intimidating. However, as my instruction progressed, the at-first disjointed pieces began to come together. I learned to glance down at the rolling tapes on the PFD, and although the MFD contained more information than a student requires, I used what I needed. In the pattern I preferred the engine page, and away from the airport, the map page. I’d select a useful checklist to match the stage of flight, and on the dual Garmin GNS 430s, I would—“Look outside!” Liz reminded me. With all the amazing avionics, you quickly learn how to divide time appropriately between the inside and outside.

The side stick, which frees up space otherwise occupied by a yoke or conventional control stick, feels natural, but the electric trim takes getting used to. “Use little flicks,” coached other Cirrus pilots, “and think like a jet pilot.” Students often wind up chasing an aircraft with trim, but the sensitivity of the SR22 taught me that you need to hold the plane where you want it, and then use the trim to alleviate any pressure.

Landings were straightforward and not particularly difficult, using minute inputs. I crossed the numbers at 80 knots, pulled power to idle in the flare, and held the nose off—enough to let the plane settle smoothly, but not too much to cause a tailstrike. With 310 hp, the SR22 obliges its pilots to manage power properly, more so than in a forgiving 172.

Certain tasks that I had performed well in the 172, however, seemed to be sloppy in the SR22. It was a challenge holding altitude during steep turns, the digital turn coordinator was confusing, and my eyes were all over the cockpit. The Cirrus reacted more quickly to control inputs than I expected.

As with anything, practice makes perfect. With each flight, I became more and more comfortable. I stopped relying on the backup round gauges and I flipped through pages on the MFD with ease, while remembering to “look outside!” The rush of information slowed down, and even the time in the pattern magically lengthened. Suddenly, I didn’t feel hurried on downwind with the before-landing checklist. I flicked the trim, and controlled the plane. Most importantly, I learned to think fast and pay attention to details. A moment’s inattentiveness in a 172 may escape consequence, but in the SR22, that’s less likely.

On the morning of my solo flight, I flew one touch-and-go and one full stop with Liz and Rachel Tanzer, a pilot for Cirrus. After they left the plane—I couldn’t wait—I grinned while talking out loud: “airspeed, centerline, oil pressure in the green, rotate.” The Cirrus and I raced upwards. Also in the pattern was the same 172 I had previously soloed, and, well, it seemed so slow!

Underneath its fancy electronics, the Cirrus SR22 is still a plane—just like a Cessna 172—that adheres to the laws of aerodynamics. Learning to fly in a Cirrus SR22 is not unthinkable. In fact, it’s quite feasible. The aircraft may demand more, but it will provide greater rewards. A student challenged by a high-performance plane is forced to think quicker, stay ahead of the plane and manage time and power effectively. The end result is improved piloting skills.

And besides, the SR22 is as cool as a plane can get. It exudes speed and grace just sitting on the ramp. During a lesson at Catalina Island, several pilots enviously commented on what a great plane Liz and I had. They mistakenly thought we owned it. “Thanks,” we said, smiling.