It happened 20 years ago on one of those chamber of commerce New Year’s mornings in Southern California, the kind that everyone watching the Rose Parade back East likes to hate us for. Visibility was probably 60 miles, surface temperature was a comfortable 60 degrees and the nearest cloud was somewhere north of the Oregon border.

It seemed everyone was flying on this pristine holiday. The practice area was full of Skyhawks and Cherokees practicing stalls and steep turns, and, a few miles offshore, a Pitts was cavorting exuberantly in three dimensions. I was taking my Mooney for a walk after a two-week delivery trip to South Africa. 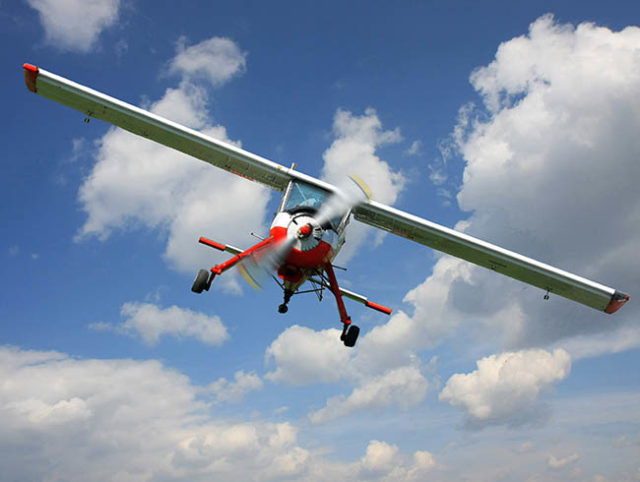 I’d just announced the inbound 45-degree turn over the harbor for Long Beach Airport and was leveling the wings when Scotty beamed up a Piper Seminole that seemed to materialize directly in front of me. He was on a head-on, collision course outbound on the 45, slightly below me at my one o’clock position, and the Seminole’s T-tail looked poised to impact my Mooney right on the pointy end of the spinner.

I hauled back on the yoke and felt the Gs slam me down into the seat. The twin’s horizontal stabilizer couldn’t have cleared my prop by more than a few millimeters.

I had a brief screen shot of the two Seminole pilots looking down at their panel as their airplane flashed beneath the nose. The whole incident happened so fast, I wasn’t sure it had been real.

The Piper was making a 45-degree departure from runway 25 left, and I was making an opposite 45-degree entry to the downwind. We were both talking to the tower, but the controller was so busy juggling a dozen or more airplanes that he hardly had time to breath.

The Seminole pilots probably weren’t at fault, and to the best of my knowledge, neither was I. I doubt that they even saw me. I certainly saw them, if only for a second or two.

In nearly a half-century of flying in and around Southern California and much of the rest of the world, that’s the closest I’ve come to a midair. According to the FAA, my near-collision (NOT a near miss) was typical of the problem in most respects. It happened in excellent day/VFR conditions, within five miles of an airport on a weekend (that also happened to be a holiday).

Fortunately, most pilots who spend the majority of their flying time in places such as the Midwest, the western Rocky Mountain states and the hinterlands of the central northern U.S. may never have such an experience. Lucky for them. They may be convinced that air traffic congestion in America isn’t nearly the major problem that many people believe.

Fly in even moderate proximity to America’s population centers, however, and you’ll quickly become disabused of that notion. I live in a suburb of Los Angeles, home to the world’s third-busiest airport for traffic movements (LAX) in 2016. America is also home to six more of the 10 busiest airports on the planet: Hartsfield, Atlanta; O’Hare, Chicago; Dallas; Denver; Charlotte; and Las Vegas. 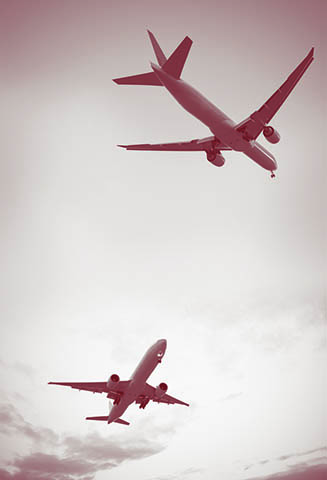 So what, you may reply. Many of our readers have probably never been into any of those seven super airports, and most wouldn’t want to try to squeeze their Bonanza or Skylane in between a Boeing 747 and an Airbus 380 on an ILS. I have friends from the Midwest who own airplanes but wouldn’t even consider flying them into the Los Angeles Basin. They tell me, “I know I’d get into trouble trying to navigate all the traffic and airspace around the dozen or so airports within 20 miles of LAX.”

Virtually all the major airports in America are enclosed by what the FAA cleverly brands as Class B airspace, what used to be named Terminal Control Areas, a descriptive name rather than an illogical letter designation. (For some strange reason, Class A was reserved for all of America’s airspace above 18,000 feet, where there are few airplanes operating per unit of sky and fewer still between 18,000 and 28,000 feet. In contrast, class B often encloses dozens of aircraft per cubic mile, all compressed into the bottom 10,000-12,000. Your tax dollars at work.)

Scanning for traffic isn’t nuclear brain surgery, but many civilian pilots treat it casually with an occasional glance outside to see if there are any obvious threats. They scan the airspace for any aircraft in view, usually confining their inspection to the forward 90 degrees of sky, rarely looking up or down, and almost never examining one of the most dangerous quadrants, directly behind them.

If searching for traffic is often a casual practice, the threat can be moving at lightning speed. With many private piston aircraft now capable of 200 knots, enabling head-on closing speeds of 400 knots (that’s one nautical mile every nine seconds), the head-on risk is the most dangerous in the forward sky.

Perhaps most obscured, however, is the risk of an overrun from the rear. Predictably, the U.S. military has studied the problem extensively. They’ve developed a simple system for scanning the sky that (usually) allows pilots to avoid collisions, despite operating in close proximity to other aircraft, sometimes VERY close.

The procedure starts with the premise that you should almost never “scan” anything. Scanning implies sweeping your eyes slowly across a given field of vision. By definition, this doesn’t allow time for your eyes to focus on anything, especially in a hazy sky where there’s often little to focus on. In those conditions, potential mid-air threats may not be readily visible even if you’re looking straight at them.

For pilots not born with super vision, however, picking a relatively small airplane out of a three-dimensional sky that may already be partially obscured by haze and smoke may be a nearly-impossible mission.

I’ve been privileged to fly with USAF General Chuck Yeager several times, and he once commented that he could not possibly have scored 11.5 air-to-air victories during WWII (including one Me-262 jet) if he hadn’t had 20/10 eyesight and an orderly system of searching for other aircraft. Yeager was a West Virginian who was already an excellent rifle shot when he enlisted in the Army, and he soon proved to be an expert at air-to-air gunnery as well when he was accepted into the Army Air Force. Double ace Yeager comments, “My most significant advantage was being able to find the enemy before they could spot me.”

Yeager’s method and that of thousands of military pilots since then has been to examine the surrounding airspace in segments rather than simply scanning. This technique demands stopping for several seconds at each segment so your eyes can focus; then panning on to the next segment for the same period; then double-checking the forward airspace; then repeating the process until you’re convinced there’s no conflicting traffic.

One of a pilot’s greatest fears, whether in combat or in the civilian world, is what may be sneaking up behind him or her. Most of us aren’t retired fighter pilots, but we should still protect the aft quadrant, if possible, better known in the military as “checking six.”

Overrun mid-airs are rare, but they represent the most significant threat during descents. Some military pilots make it a habit to change heading several times during any descent to provide a view of what might be gaining on them from below.

While it’s true most general aviation designs rarely make provisions for looking straight back—fuselage-mounted rear windows offer little more aft visibility than a mail slot—or directly below, you can sometimes shortstop the problem by flying gentle S-turns during descents and grabbing a quick look at the rear quadrant both left and right during your turns. That’s one reason most fighter aircraft have bubble canopies that allow a full 360-degree lateral view.

Similarly, the threat becomes more convoluted if the intruding traffic is both behind you and climbing. Any aircraft ascending and overtaking is often impossible to spot for general aviation pilots. The Google Earth-modified Caravans with their belly-mounted camera ports may be among the few aircraft with a direct view of the sky and ground below, displayed on the panel before them.

Fighter pilots flying highly maneuverable aircraft sometimes use the technique of simply rolling inverted to check for traffic behind and below. Pretty obviously, that’s not a recommended procedure for your standard Piper/Cessna/Beech/Mooney/Cirrus models.

(In one instance in 1971 over the Mojave Desert north of Palm Springs, a Marine F4 Phantom and an Air West DC-9 collided shortly after the Phantom performed a clearing roll to check the airspace below. A witness on the ground reported the roll to the FAA, claiming that the F4 had been “stunting” a few seconds before the collision. The radar intercept officer in the Phantom’s rear seat was the only survivor of the accident, and he acknowledged the pilot had performed a roll, but only to check for traffic below. Apparently, the FAA was not aware that a roll to inverted was an accepted maneuver for fighter aircraft until the Marine Corp confirmed it.)

If you do spot other traffic, note the relative motion on your windshield or side windows, no matter how far away the target. If the perspective isn’t changing and the other aircraft is becoming larger, you may be on a collision course.

…Or you may be looking at a bug spot on the windshield. When my airplane isn’t flying, it’s hangared 24/7, so I can keep close track of unlucky bugs that make it through the prop arc. No matter what airplane I fly, though, I always carry a bottle of Meguiar’s Mirror Glaze and make certain every square inch of Plexiglas is spotless before I climb aboard.

Pretty obviously, any bug spot will always maintain the same position on the windshield, and the relative motion will never change, no matter what maneuver you do.

The reality is that there is no best method of searching for other traffic. Pilots may adopt their own technique for clearing the airspace around them. What works for you may not be as efficient for other pilots.

Inevitably, electronic assistance is available but only at extreme cost. A number of Traffic Collision Avoidance Systems (TCAS) can not only provide position and trend warnings of other aircraft but also can suggest anti-collision resolutions. These are at the top of the technical mountain, generally priced well outside the province of all but those who fly the most expensive aircraft—airlines, corporate jet owners and, of course, the military.

Now that ADS-B is mandated for 2020 (at least, that’s the current initiation date), we may be approaching a time when pilots will have no need of a controller. In that coming age of robotic sky, everything will be displayed on a screen in front of you, and you’ll be able to make your own decisions.

Personally, if that automated future comes to pass, I’ll miss talking to controllers during the en-route portion of a trip. I use flight following religiously, and I’ll forever appreciate the buffer those dedicated men and women provide against a close encounter of the third kind.