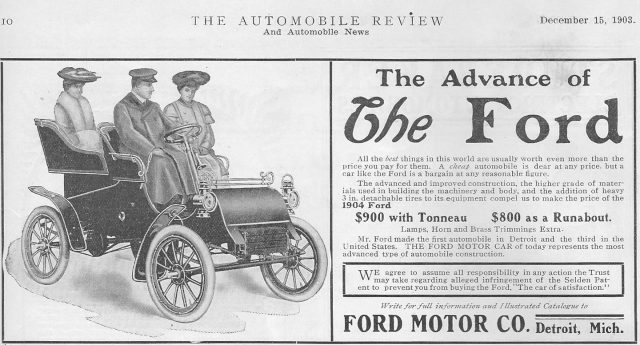 I don’t know if anyone does it anymore, but when I was a little kid and we’d occasionally see a Model A Ford or similar old-timey car tooling down the street next to Mustangs and Olds New Yorkers, we’d holler, “Get a horse!” We thought it was funny because, well, the era of horses had long since passed. I don’t know the derivation of the phrase, but I’m sure it’s as old as the horseless carriage. I ran across the reprint of an article from the Saturday Evening Post (talk about old technology) written in 1911 by one of the earliest automobile makers, Alexander Winton, who discussed the rise of technology and the public’s fear and misapprehension of it. If you haven’t heard of Winton (I hadn’t), you should drive down that Volkswagen Rabbit hole and check him out. He was not only a brilliant inventor but a fine writer, too. In the Saturday Evening Post piece, he quotes Thomas Edison, whom I’d wager you have heard of, quoted from a story 15 years in which he made the case we should be making about technological advances in aviation today. I’ll include the entire text of Edison’s quote, as every word is spot on:

“Talking of horseless carriage suggests to my mind that the horse is doomed. The bicycle, which, 10 years ago, was a curiosity, is now a necessity. It is found everywhere. Ten years from now you will be able to buy a horseless vehicle for what you would pay today for a wagon and a pair of horses. The money spent in the keep of the horses will be saved and the danger to life will be much reduced.”

“It is only a question of a short time when the carriages and trucks of every large city will be run by motors. The expense of keeping and feeding horses in a great city like New York is very heavy, and all this will be done away with. You must remember that every invention of this kind which is made adds to the general wealth by introducing a new system of greater economy of force. A great invention which facilitates commerce, enriches a country just as much as the discovery of vast hoards of gold.”

There have been a few seemingly unrelated stories pop up here and there over the past few weeks, and they are all related in a way that nobody has put together yet.

A major airport in the UK, Gatwick, was shut down for more than a day over a coordinated drone disruption. It was alarming, that an organized group of individuals could use drones to shut down a major transportation hub. And it succeeded. The terrorists won. The only problem, of course, was that the disruption apparently never happened and no drones were actually ever sighted. It was a case of mass hysteria. Our fear of terrorism and of drones combined to stop all traffic at one of the busiest airports in the world.

The public’s fear of drones is very real, and I get it. They don’t want these little flying robots to change the world. Will they invade our privacy? Will they disrupt our peace and quiet? Will they deliver the mail! The answers are pretty clear. Yes, they will invade our privacy, though the privacy they invade has already been so thoroughly invaded by now that what’s a little drone snooping to worry about when viewed in the context of government snooping, red light cameras, private security cams built into every other neighbor’s doorbell? Still, I laughed when I saw the video of a single, well-thrown roll of toilet paper taking out a drone flying at an intermission demonstration at a sporting event. I shouldn’t have laughed. It was wanton destruction of a piece of equipment. The videos have generated a lot of traffic, however, in part I’m sure because it’s kind of cool to see how such simple technology, toilet paper, can take out the latest the world has to offer in advanced digital mechanisms.

Another seemingly unrelated event, or series of events, is taking place everywhere driverless cars are driving themselves around. Vandals are attacking them, sometimes in ingenious ways, though it should be pointed out with grave potential consequences to their vandalism. Some of the attacks are stone age stuff, the throwing of rocks and clumps of dirt at the robot cars; others are more clever, like putting graffiti on stop signs to fool the car’s AI systems, which are apparently quite easily fooled.

The intent of the vandals is hard to auger. Few of them are advertising their criminal activity, for obvious reasons, and while some of the attacks might be done by people who are displaced or fear they will be displaced by autonomous vehicles, or safety advocates trying to shut down what they see as dangerous technology, most are likely the raging of people who simply don’t want the world to change.

As we see the rise of autonomous planes and electric propulsion (or some other form of new tech), we’ll see naysayers, backlashes and maybe even vandals. Regardless, the world is changing and will continue to do so, and the aviation world is very much a part of that larger trend toward more automation and new forms of energy. The crash of a Lion Air 737 Max recently was apparently caused by a new safety system that the crew didn’t understand well enough to override when it was confused by bad sensor inputs. This accident, however horrifying, doesn’t mean we retreat from technology. It means we figure out how to make it safer, a process that’s been going on ever since one of the earliest car makers had the brilliant idea of putting a horn on the horseless carriage to warn pedestrians, like those little kids yelling “Get a horse” to get out of the way. Progress coming through.

One thought on “Mass Hysteria Over New Aviation Technology?”