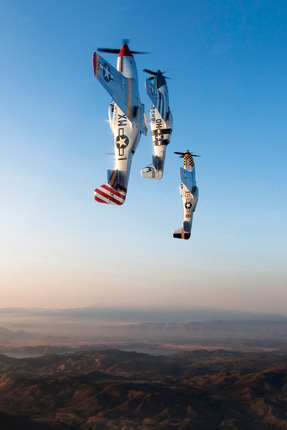 As I lower myself into the rear cockpit, I pinch myself. No, I’m not dreaming. I really am in a WWII P-51D Mustang, about to ride with the Horsemen, the world’s only P-51 aerobatic team, known for their hyperprecise formation aerobatics.

There isn’t so much as a nick in the zinc chromate green that covers the interior. This particular Mustang, February, has been meticulously restored and belies the fact that it was built during the height of the war. I wonder about the pilots who have sat in this cockpit and the stories this warbird could tell. Dan Friedkin, who flies right wing on the team and is my pilot today, helps with the gauntlet of straps, clips and latches that will connect me to this aircraft for the next hour.

The Horsemen—their name derived from the Metallica song, not the biblical reference—are a different air show act. Whereas many performers take pride in mind-blowing tumbles and hardcore figures, the Horsemen prefer to showcase the unadorned beauty of flight. But such a simple description is like saying Beethoven played nice piano.

The team employs a powerful formula that elicits total silence and awe from its audiences. The combination of the iconic mystique of the P-51, the growl of three Merlin engines, the thrilling precision of a tight formation, and the elegant grace of giant, soaring maneuvers creates something moving: an homage to those who fought in this grand machine and a fitting tribute to the sensual feeling of flight. And they’ve added a new element: their own soundtrack.

Ed Shipley, who flies in the left-wing position on the team, had worked with Oscar®-winning composer James Horner on a previous aviation project, and the two became fast friends. You might recognize Horner’s name from the musical score credits of Avatar, now the highest-grossing film in history. He joined the team on practice flights, where the idea of flying the routine to a custom soundtrack was born. Using an 88-piece orchestra, Horner wrote a full score for the Horsemen’s aerial dance, and watching the team’s performance accompanied by the thunderous sound of Horner’s lush, sweeping music is an authentically emotional experience.

“We have a music feed in our cockpits,” says Shipley, who flies left wing in the formation, “and we listen to it during our routine.” Following the team’s performance at the Chino, Calif., air show, I notice more than a few people wiping tears from their faces. 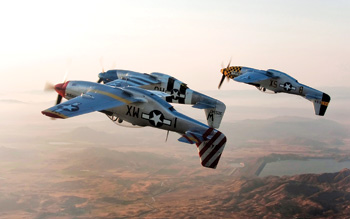 Anatomy Of A Horseman
The intense concentration required to fly formation aerobatics in a $3 million airplane just a few feet off the ground is obvious. This day, Ed Shipley, Dan Friedkin and Jim Beasley are ensconced in the back of their support bus near the flight line, reviewing video footage of their prior flight. “Our goal is to fly a perfect flight,” says Friedkin, “but we know it can never be absolutely perfect.”
Advertisement

The team chooses from several Mustangs owned primarily by the Friedkin family and by the team members themselves. Beasley flies lead in the very rare P-51C, with Shipley and Friedkin on each wing in the more familiar D model. Tom Friedkin, Dan’s father, is a well-known warbird owner and pilot, and flew the Corsair sequences in the popular late-’70s television series Baa Baa Black Sheep, among others. 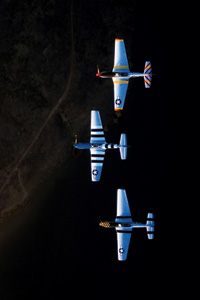 Though each P-51 is slightly different, Dan Friedkin tells me they’re stock airplanes. Their famous, supercharged Rolls-Royce Merlin engine gives each Mustang about 1,500 hp. One aspect the team constantly deals with is the airplane’s iconic status. “The Mustang is the ultimate skeleton key,” smiles Shipley. “It opens every door. The P-51 is one degree of separation from everything.”

Flying a Horsemen show is grueling. “Ultimately, you have to remember that these airplanes were built for 19-year-olds,” says Shipley. “So at my age, the flying wipes me out.” During a routine, cockpit temperatures rise well above 100 degrees, and the stick forces are about 20 pounds per G. “The sensory input is intense,” he adds. “You’ve got the ground right there and all this stuff happening peripherally. By the time it’s done, we’re wiped.” Our photo flight is to be their fourth flight of a very long day.

The demands of formation flying change the way certain maneuvers are flown. “Our whole formation routine is based so much on feel,” explains Friedkin. “We rely on what we call ‘gateways,’ that are predetermined speeds or altitudes, before we can start a maneuver and are based on constantly changing physiological and environmental factors.” The team keeps the G forces as low as possible, but they can spike to +5 G’s or more during the routine. Their goal is to showcase the beauty of the airplane within the context of “elegant energy management,” as Friedkin describes.

As lead, Beasley has a large responsibility: “My wingmen are totally dependent on and trusting of me, and I have to ensure their safety. I’ve got to be at the right place, at the right time, at the right heading, at the right speed throughout the entire show.”

Safety comes first. The team is constantly practicing and evaluating, and each member is a seasoned Mustang pilot with thousands of hours of experience. Shipley simply says, “We practice non-stop. This is not easy flying.”

Saddling Up
From the Mustang’s rear seat, I’m watching the big, four-blade propeller start its ponderous rotation. The aircraft’s nose sits high in the air, giving the airplane an insouciant, Mick Jagger-like stance. With a cloud of white exhaust, the Merlin does its magic, and we taxi to the runway for a formation takeoff.

Friedkin pushes the throttle forward, and I feel the nearly 1,500 horses tugging on this aluminum machine, pulling it into the air rather quickly. With a loud and healthy clunk, the gear comes up, and we’re headed for Lake Mathews to run through an aerobatic sequence for our photo flight. Earlier I had noticed Shipley writing his blood type on his forearm in big, black Sharpie letters. “What if I hit the ground?” had been his matter-of-fact reply to our curiosity. It’s a coarse reminder that as fun as this looks, it’s no game.

There’s nothing anywhere that can prepare you for looking out a canopy from within a Mustang formation. Instantly it’s 1943, and I’m at a forward air base in England flying bomber escort. The ghosts in these machines are making their appearances, and the thought strikes me that I never want this to end.

We move as one through all manner of luxurious, graceful loops and barrel rolls. A fourth Mustang piloted by well-known warbird pilot Steve Hinton and carrying P&P Editor Jessica Ambats maneuvers around our formation to capture different photo angles. Later, we head toward the setting sun, with Hinton repeating roll after roll around us. All too soon, the darkening sky sends us home.

“There are just no words to describe what this feels like,” Shipley tells me. But with the addition of James Horner’s moving score, audiences are going to get a lot closer to it.