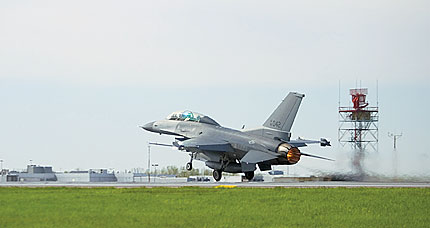 The movie is starting. The cabin is dark with the window shades lowered. I open the ones by me and look down from FL350 at the landscape. I’m on United Air Lines flight 193 and over the Midwest, about two hours after takeoff from Dulles, Va., en route home to Los Angeles after a flight earlier this morning from Syracuse, N.Y., to Dulles.

Contemplating the last couple of days, I look down at my hand. It looks like my father’s hand, a hand I remember from 25 years ago when I was 30 and he was 55. A hand that’s just starting to show age, lined and dry from life, but now, it’s my hand. A hand that also shows a long life, aging with experiences filled mostly with pleasure and fun. They’re experiences that few people have the chance to equal.

This week, my opportunities took me to where I had pictured myself when I was a young man, in the pilot seat of a frontline fighter with enormous capabilities. Yesterday, my left hand grabbed the throttle of a New York Air National Guard (NY ANG) F-16D fighter, while my right hand was wrapped around the control stick, pulling 5+ G’s as I recovered from a botched barrel roll that turned into a kind of screwed-up split-S maneuver. The pilot of the aircraft is Lt. Col. Greg “Gabby” Semmel, who was a recent instructor at Red Flag, the famous U.S. Air Force “Top Gun” school, at Nellis AFB in Las Vegas.

As a first-time F-16 pilot and passenger, I sat in the back cockpit, which means that I was looking straight ahead at the canopy-raising mechanism that blocks all of the straight-ahead view. In addition, I was fitted in what I can only describe felt like what a six-year-old must experience by wearing last year’s snowsuit. There are almost 50 pounds of gear on me: a flight suit, a set of pressure suit pants and vest that’s nearly unique to F-16 pilots, a survival vest that must weigh 20 pounds by itself and has every conceivable gadget ever created, a compacted life vest, an oxygen mask, hoses and a helmet—all sized to fit someone else, it seemed. The last straw was attaching the five (that’s five!) harness/seat-belt buckles. The seat belt clinched or cinched the deal. It had to go under the survival vest and made the vest ride up under my chin with the life vest up against my helmet. That means that I couldn’t move any farther than to reach the plastic bag—my handy sick sack that was fortunately not needed—that’s tucked into the elastic band over my knee. I couldn’t even reach the small digital camera in my ankle pocket.

The experience also told me that I couldn’t see much more than my peripheral vision because I could hardly move my head. I wonder how actual air combat is handled because rule number one is “can’t see ’em, can’t kill ’em.”

Now, for the fun. Gentlemen, start the engine. During the taxi, I was nervous. I only had three things to do before takeoff. First was turn off the intercom (I never asked why), then arm the ejection seat (easy huh?) and then test the oxygen by using the toggle switch to go from normal to 100%, check for pressure and then go back to normal. Of course, the oxygen mask is on and quite tight during this test. The next thing I knew, I had turned the oxygen off by pulling the switch back one too many clicks. Here we were. I couldn’t breathe. We were ready to taxi on to the runway, and I couldn’t communicate with Gabby. The oxygen switch, by the way, is out of sight down to my right behind the control stick covered by the already troublesome survival/pressure suit/life vest combination, and I couldn’t find it.

So what did I do first? I wasted about five seconds trying to find the switch, then I tried to tell Gabby to hold up, then I realized that I have to find the switch to activate the intercom—did I already say that I couldn’t breathe and, oh yeah, I’m nervous? But I finally got my thumb under the mask and pulled it away, then turned on the intercom and asked Gabby to hold up. At last, I found the oxygen switch and set it for normal. Now, I was ready. Let’s get in the air before I accidentally turn off the engine and they realize that they have the wrong guy in the backseat, I thought.

Our mission started with a standard “newbie” takeoff in an F-16. When someone who has had the privilege of flying in an F-16 says that it accelerates, believe that person—it does, from zero to almost 500 mph in less than two miles. The first couple of seconds of acceleration make you think that the afterburner is in full blast, but when you feel the extra punch when the afterburner really hits, it makes you think that this can’t possibly be real. Then it was time to climb, starting at 400 feet MSL nose up to a 70-degree pitch for a few seconds, and then we pulled through at about 7,000 feet, leveling at 10,000 feet inverted. Then we rolled upright, 50 seconds from the brake release. Now, I had to tell Gabby to take a moment to let the guy in the back—me—re-cage his eyeballs because the world still didn’t look quite right.

After the unrestricted takeoff, we headed north to the Falcon MOA. As soon as we were headed in the right direction, I was given the controls. It was surprising to me that the F-16 is easy to fly, at least straight and level. This was my first time flying a jet, let alone a fighter, so I didn’t have much other than my Beech Bonanza or previous Cessna 340 to compare it with. Also, I’ve never done any aerobatics.

Back to the “kind of” split-S. Gabby asked me first to do an aileron roll, which I did; I just ratcheted the last 30, 20 and 10 degrees of the maneuver. Then, he asked me to do a barrel roll. I started the maneuver at 13,000 feet and 400 knots IAS, pushing the nose down and to the right to begin the barrel roll, the first that I had ever tried in more than 40 years of flying. The problem, which became quickly apparent, was that I pulled the nose up as we started, then, as we rolled through the top, I continued to pull, which put us vertical, as in straight down, before I had a chance to take a long breath. As I’ve already mentioned, things happened fast and it was difficult for a new guy to see and quickly understand what was happening. All I knew, which the instruments mostly told me, was that I was going straight down at about 400 knots, descending through 10,000 feet. Being the great pilot that I am, or thought that I was, I concentrated on leveling the wings, reducing power and pu-u-u-l-l-ling up at the rate of 5.5 G’s. I didn’t know whether to laugh or cry or scream, so I gave the controls back to Gabby.

I didn’t like not doing it perfectly the first time, so I let him fly for a few minutes while I lived with the fact that I didn’t do it right. If we had more than one hour, I would have kept the controls until I did it, not just right, but perfect. But I wanted to see more. This is one monster plane, and I wanted to see what it could do, and Gabby was just the person to show me.

Next was a Mach .96 run in the Falcon MOA north of Syracuse to the Canadian border at about 1,000 feet AGL. Those of us who know choppy turbulence in a piston-engine aircraft at 140 knots will know that something is different at almost 600 knots. The “road” is a cobblestone track with lots of stones. I wondered if there were any horses below us in that wilderness because they’re probably miles and miles away in Canada now.

Soon after the screaming run north, we were cleared into the target range, R-5201. All pilots in the upstate New York area, remember to keep out of the restricted area because the NY ANG is coming through, big time—bombing, staffing, diving, climbing, pulling and banking to see who can put the lead on the target, and the F-16s and the ANG men and women are the ones who can get it done.

The next 30 minutes or so shot by in a blink. We simulated bombing and shooting up the ground, then “bitching Betty” told us that we were “bingo fuel” and it was time to head for home. Once again, I got to fly the aircraft, and we managed to get back to Syracuse, where I flew it into the break for a 360-degree overhead approach, then Gabby had to take the plane back for the landing.

This had been a one-hour flight and a weekend spent with warriors who volunteer to protect our country. You’ll find more experience in an ANG squadron than most in the U.S. Air Force (USAF). I learned from the NY ANG 174th Fighter Wing Commander, Col. Anthony Basile, that many ANG members have more experience than U.S. Air Force members. In fact, the crew chief, Joe Fauler has more experience than typical active-duty USAF crew chiefs. Thanks, Joe, Lt. Col. Maryjo Timpano and Dr. Lalainia Secreti, for helping this old-timer get into a young man’s toy. I now know that it’s time for a little exercise, and where did those bruises around the shoulders come from?