Nausea isn’t the most alluring topic. Just the very word brings up bad memories. It’s not fun to regurgitate that icky feeling we’ve all experienced at one time or another. When we feel nauseated, we normally have a very good idea why we do—food poisoning, the flu or a whole host of other reasons. When we get nauseated from motion sickness, however, the cause can be a rather slippery and elusive thing. Symptoms can vary intemperately, and while people have theorized about its raison d’être, no one seems to really know why it happens or what causes it.

There are a lucky few of us who have never experienced motion sickness. When I was a child I heard about kids who got “carsick,” but I could read a book upside down while standing on my head in the back of my parents’ car and it wouldn’t have bothered me. When I was 17, I took a ferry across the English Channel in the middle of winter. The sea was really rough and the passengers began to turn green one by one, making frequent trips to the bathroom. I remember their heads lying on their hands at the table and moaning while I, on the other hand, sat comfortably reading a book. Several people approached me, asking, “How do you do it?” “What is your secret?” I wish I knew! 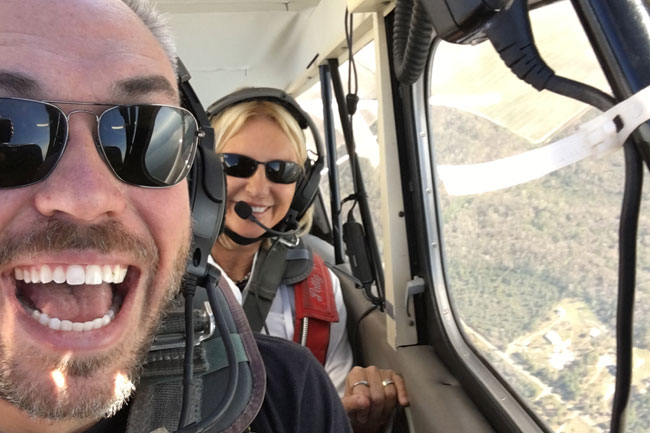 What the heck is motion sickness? The most common definition is it’s our physical response to the conflicting messages between what the eyes see, the inner ear processes and the body senses. But it’s not cut and dried. There are theories, too, that motion sickness is caused by anxiety (I think it’s exacerbated by anxiety but not caused by it) or that puking when motion sick might be a response to clearing out perceived neurotoxins that the brain has been tricked into sensing. There’s one theory about motion sickness being a caveman survival instinct we inherited to protect ourselves from poisoning. Personally, I don’t buy that one, and how long do instincts last anyway? Whatever the truth, it’s fair to say that even the experts don’t really know all there is to know.

Accounts of motion sickness go back as long as we’ve roamed the seas, so we can’t blame it entirely on moving machinery. Lawrence of Arabia got motion sick while riding a camel, and seasickness, well, that has caused suicides and lost wars. Charles Darwin was chronically seasick; Hippocrates, Cicero and Horace complained of it. Virgil memorialized it. Dogs get it, and apparently horses do, too. So now that we’ve established that, what can we do about it?

For people prone to motion sickness, it would be pretty difficult to live a full life if we never rode in cars, boats or airplanes, or even camels, so avoidance isn’t always realistic. Not to mention, you don’t really know how you’ll react to certain activities until you try them. Motion sickness is unpredictable. The personal expression of it varies so much that it’s a very individual thing. Some who get motion sick in cars don’t necessarily feel it in airplanes, and vice versa. Some people grow out of it as they get older, and people can develop inner ear issues later in life that affect them. When avoidance isn’t possible, prevention might be the answer. I’m surprised at how many over-the-counter and prescription medications there are, but I imagine most people stick to the more common ones like Dramamine, Benadryl or a Scopolamine patch. Drugs can have unpleasant side effects like drowsiness, but there are other preventatives like ginger, an ancient remedy, and the Reliefband, which works by generating a pulse from the underside of the device that stimulates the median nerve.

At our aerobatic school, we want our students to be happy, comfortable and coming back for more. We don’t like to dwell on it, as anxiety can exacerbate it, especially in a new environment like aerobatic flying, but we do want to address and prevent it, if possible. We suggest wearing comfortable clothing, eating a light and bland meal (no greasy pork chops or spaghetti!) before flying, and if the student thinks they have a predisposition for motion sickness, then to bring a Reliefband with them (we also keep one at the ready). At the school, we keep bowls of chocolate handy (more for low blood sugar caused by pulling G’s) and ginger ale in the fridge at all times.

Most of our students feel only exhilaration and excitement after their first lessons, but a percentage do feel some discomfort on their first and sometimes their second flights. They tend to get over it quickly with a break between flights. I’ve known a few airshow pilots like Bob Hoover, who get motion sickness when they start spring training. I’ve seen some bad cases of motion sickness, and in every one of them, the individual has been able to overcome it with time and practice. So, just because you might feel some discomfort, don’t let it stop you from flying, boating or any other activity that causes it because, odds are, you’ll get over it quickly by habituation.

Allan Moore, our Chief Instructor, believes that to help prevent motion sickness in the early stages of learning aerobatics, you should only expose a student to one axis at a time. In an essay he wrote, “Nausea, Inner Ear and Rolling ‘G’,” he writes: “A seemingly small technique that has dramatically helped our students build tolerance is by segmenting one axis of motion at a time, for the first couple of flights. Blending roll and pitch together (rolling G) is apparently challenging on the inner ear. An example of this would be the last half of the aileron roll. As the roll is finished and the ailerons are returned to the neutral position, most students feel the need to immediately pitch up to return the nose of the airplane up to the horizon. It seems the inner ear is still excited from the roll and then the added pitch up causes additional excitation or motion, which students are not used to. Placing a 2 to 3 second delay (hesitation) between roll and pitch seems to give the inner ear time to stabilize somewhat between axis. While this may cause a little altitude loss at the finish of the ballistic aileron roll (technically not correct), it will help get the students through the first couple of flights. After all, keeping a student comfortable helps extend the flight, increasing retention of newly learned skills, and keeps the fun meter pegged out.”

Once you’re in the cockpit, it’s important to be as comfortable as you can be. You’re wearing comfortable clothes. Fresh air is important so know where the air vents are. Make sure the volume control is set so you can easily communicate with your instructor, then relax and enjoy the experience.

If you start to feel clammy or weird, tell your instructor right away. Don’t wait for it to go away or get better. It usually won’t until you’re flying ride side up. Let us know and we’ll adjust the lesson. Don’t get frustrated; there will be another lesson and we can almost guarantee that during the next one you’ll feel much better. You can stop anytime you want to. Building up tolerance is key and sometimes takes a couple of flights. The more you do, the easier it is. And, if you do get sick, don’t beat yourself up about it! You won’t be the first, nor will you be the last. Your akro instructor will have a bag ready and you might feel better afterwards. It’s nothing to be ashamed about. But, I do have a rule that if you miss the bag, you get to clean it up. Above all, remember you wanted to do this and it will get better.

What should you do when considering taking aerobatic lessons or upset training? First, don’t worry! Don’t dwell on it! Anxiety certainly seems to exacerbate the possibility. It creates tension and that’s not helpful for an activity that uses motor skills like aerobatics. Even though you really want to experience aerobatics and new attitudes that will ultimately make you a safer pilot, it’s understandable that you might be tense when flying upside down and it’s probably something you’ve tried to avoid your entire flying career. But I always tell people—whether they’re nervous passengers on an airliner or taking their first aerobatic lesson—to “surrender” to the moment. You’re flying with professional pilots in well-maintained airplanes and their goals are the same as yours—a successful and safe flight.

We have a sign on the door into the hangar at our akro school that says, “It’s time to Man Up.” It’s not that we’re not sympathetic, but sometimes you have to put up with discomfort and uncertainty when pursuing your goals. Push through it, persevere, and you’ll get to the other side.