XTI aircraft announced at the Fort Lauderdale International Boat Show that its order book has swelled. Over the past year, the company has gotten more than 60 orders for its futuristic-looking tiltrotor (tilt-fan?), the TriFan 600. Apparently, some of the people most interested in the craft are owners of very large yachts, many of which employ helicopters as a quick means of going ashore or back to the boat. The TriFan 600 would fit that bill and provide turboprop-fast cruise performance as a considerable bonus. 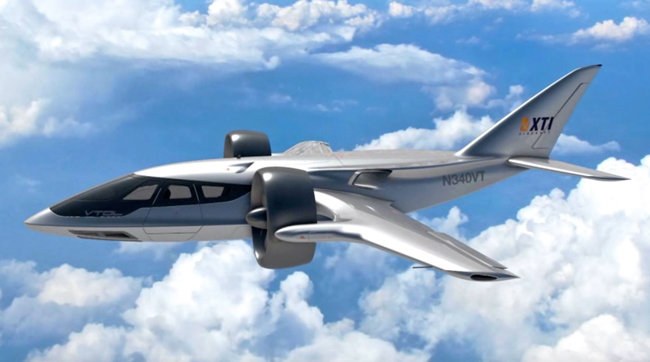 XTI, which is based in Denver, Colorado, announced earlier this year that it would make a first flight of a two-thirds-scale concept demonstrator in 2019, and it selected the engines, though we perhaps should say “engine,” for the concept plane, the Honeywell HTS900, a 1,000-lb-class turboshaft engine. The TriFan 600 will employ a single engine that will drive all three fans. XTI says that the TriFan will cruise at around 300 knots (a target that’s lower than earlier projections of closer to 350 knots), and with a range of approximately 1,200 nm. That range, fascinatingly, shrinks to less than 700 nm if the aircraft takes off vertically, implying that the company foresees the craft using copious amounts of power—and, hence, fuel—for VTOL operations.

The company told Plane & Pilot that it’s still on track to fly the demonstrator by late this summer. Assembly of the proof of concept article has not started, though a company spokesperson told Plane & Pilot that the components are either ready or on track to be constructed in a timetable consistent with the target date for the first flight of the demonstrator.  The current pricing on the TriFan 600 is $6.5 million, which is comparable to or less expensive than turboprop twins. Should the company overcome the many, substantial obstacles and achieve certification for the tilt-wing craft, it would be the only civilian tilt wing aircraft in the world.