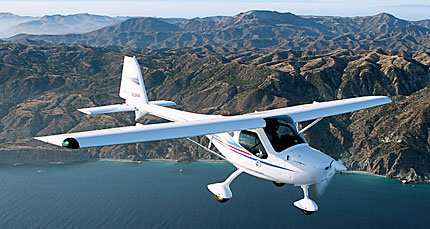 The Germans have never had a monopoly on quality, but there’s little question that American drivers have long regarded German cars as some of the best in the world. Mercedes, Porsche, BMW and Audi all have reputations as high-quality, high-performance machines.

While German lightplanes have benefited from the same uncompromising quality control, they’ve been notably less successful in the U.S. and world markets. The delightfully handling Extra 300 series has made its mark as an excellent aerobatic machine, but other German-produced aircraft have found tough sledding on this side of the pond. Ruschmeyer was a fun retractable that never caught on the first time around in the 1990s, then was revived a few years ago as the Solaris, which still hasn’t caught the pilot public’s fancy.

The Remos G-3 is an airplane from Germany that could change all that. The G-3 represents the dream of German designer Lorenz Kreitmayr, a lifelong aviation fanatic who was determined to do things his way.

His way turned out to be the light-sport aircraft market. In many respects, the Remos is one of the most exotic LSAs available. Kreitmayr initiated design efforts in 1993, and the prototype first flew in 1997. Following a recent infusion of capital by software entrepreneur Eberhard Faerber, the factory in Pasewalk, Germany (an hour’s drive from Berlin), is currently turning out about one airplane every two weeks, and many of those G-3s are finding their way to the vital U.S. market.

I flew a G-3 with Doc Williams of Corona, Calif. Williams purchased his Remos through Remos USA, (888) 838-9879, in Fullerton, Calif., the West Coast distributor for the line. At first sight, the Remos promises a different experience, and it delivers exactly that. It’s an attractive little airplane, and one can easily see that good quality control and intelligent design were foremost in the Remos’ conception. As partial acknowledgement of Kreitmayr’s efforts, the G-3 was voted “Aircraft of the Year” at the AERO Show in Friedrichshafen, Germany, in 2000.

The G-3 is constructed primarily of carbon fiber, a nearly ideal material for airplanes, a third lighter than fiberglass, yet twice as strong. Fabric-covering is also used on portions of the Remos’ wing.

Advertisement
The G-3 is an economical design with a pod-shaped cabin up front, trailed by a waspish empennage and conventional low tail with a small ventral fin. Kreitmayr’s philosophy was to produce the most efficient design possible, minimizing wetted area and equivalent flat-plate area, consistent with the mission of carrying two folks in comfort. The gear legs are smoothly faired into the wheel-pants, and the overall impression is one of clean, efficient aerodynamics.

Power is provided by an Austrian Rotax 912 ULS, a 100 hp mill at 5,800 rpm with a gear reduction of 2.43:1. Now that Rotax has dropped its V6 program, this is effectively the largest engine the company produces. TBO is listed at 1,500 hours.

Entry to the cabin is through a pair of fold-up doors, à la DeLorean. The front office is wide and comfortable, nearly 47 inches across, easily capable of accommodating two big men. The panel is straightforward and simple, with a surprising variety of avionics options available. Garmin, Becker and Bendix/King avionics are on the list, even a Dynon seven-inch EFIS display. VFR is the rule on LSAs, but utilizing the panel-mounted Garmin 496 and 330 Mode S transponder, you can select TIS uplink traffic, XM Satellite Weather and terrain if you’re so inclined.

Once you’re settled inside, the cowl slopes slightly downhill to provide a good view forward. The view to the sides through the combination doors/windows is also excellent. There are even mini-side windows on each side of the aft cabin, more stylish than functional.

Pitch and roll control are via a conventional stick with a coolie-hat electric trim for both elevator and ailerons. The nosewheel is steerable, and flaps are electric with 40 degrees of deflection available. In combination with a high-aspect-ratio wing, flaps help produce a stall speed of only 39 knots, allowing approaches as slow as 50 knots. As you might expect, such a slow stall doesn’t demand much runway—less than 600 feet for both takeoff and landing.

A relatively large wing (131 square feet), 100 hp out front and the LSA legal limit of only 1,320 pounds to lift translates into good climb, 1,300 fpm according to specs. Even if that’s a little optimistic, the airplane can easily manage 1,000 fpm, putting it well ahead of most other LSAs.

According to Remos, the typical unequipped empty weight comes in at 625 pounds. Add even 75 pounds for options, and you’ll still be left with a useful load better than 600 pounds. Subtract 21 gallons of fuel, and you have about 480 pounds remaining for people and stuff, a more than reasonable allowance and better than some certified two-seaters.

Handling qualities are appropriately benign. Stalls are practically nonexistent with no tendency to fall off on a wing, provided the ball is somewhere near the center. The airplane simply sets up a hobbyhorse bobbing as it settles toward the ground. Roll rate isn’t exactly lightning quick, but it’s fast enough to make the airplane responsive without being quirky.
Advertisement

In cruise mode, the Remos turns in about 110 knots in keeping with Remos’ company motto, “The Sky Is Your Freeway.” (Notice use of the term “freeway” rather than “autobahn.” Years ago, I was delivering a new Piper Archer to Munich, and cars were passing me on the autobahn below.) Perhaps the best news is that you can pull back the little Rotax to sip fuel at 3 gph, providing up to six hours of endurance plus reserve. Remember, this is a European airplane, and they’ve been paying the equivalent of $5 to $6 per gallon for fuel over there for decades. The Rotax is even approved for high-test auto fuel if avgas is in short supply.

Another concession to economy on the Remos is folding wings. The wing-fold mechanism allows rotating and swinging the wings back alongside the fuselage, so you can trailer the airplane home to store it in your garage. Alternately, you can fit three G-3s in a standard T-hangar at the airport.

Base price on the Remos is $89,500. A reasonably equipped airplane would sell for about $110,000. In keeping with its international lineage, the Remos is distributed in Germany, Austria, Brazil, Denmark, France, Switzerland and Turkey.

What’s left unspoken is the fact that the Remos is plain fun to fly, easy to maneuver, simple to operate. If you’re into LSAs, by all means, check out the Remos G-3. You may be surprised at how much airplane you can buy for a little more than $100,000.