After a 14-year restoration, the Berlin Airlift Historical Foundation’s C-97G Angel of Deliverance took to the skies over Brooklyn, New York, on November 7, 2017. The restoration at Floyd Bennett Field’s Historical Aircraft Restoration Project (HARP) culminated with a brief re-opening of runway 6 for its departure.

The foundation’s C-97G is the only one flying, and its liftoff from the historic field marked the first flight of the type in over a decade. The Angel of Deliverance was stripped of more than 3,000 pounds of equipment before its departure from the 5,000-foot runway. After a brief stop at Toms River, New Jersey, to take on additional fuel, she continued to Reading, Pennsylvania, the foundation’s current home field. 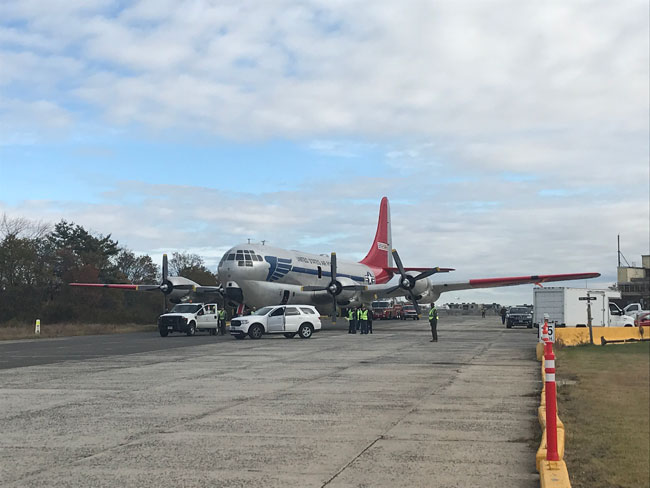 Plans call for finishing out the interior of the C-97G as a Cold War museum and classroom. Together with its C-54, The Spirit of Freedom, the foundation will tour the country, attending airshows and other events to provide a living link to the historical period from the Berlin Airlift until the fall of the Berlin Wall.

Bennett Field was New York City’s first municipal airport. Opened in 1931, it was party to many historic flights by fabled flyers including Wiley Post, Amelia Earhart, Jackie Cochran, Roscoe Turner, Douglas “Wrong Way” Corrigan, and John Glenn. Bennett Field became a military field in 1941. It served over time as Naval Air Reserve Base New York, Coast Guard Air Station New York, and Naval Air Station New York. While closed to aviation traffic other than NYPD aviation units, Bennett Field is operated by the National Park Service as a recreation area and is open to the public. Several hangars are preserved, as well as the operations building and control tower. In Hangar B, the HARP is open on Tuesdays, Thursdays and Saturdays to the public. The park also hosts a campground and model airplane flying field.