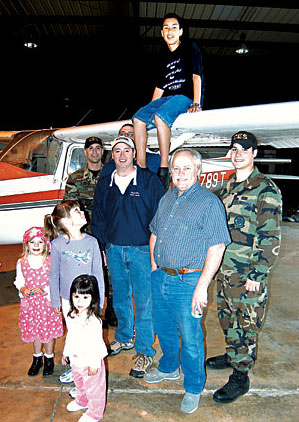 Dan Williams has always been interested in aviation. “I had my first flight lesson at 18, but I had no money to finance further lessons in college,” he recalls. Though he maintained his interest in aviation, it wasn’t until the end of his first marriage that Dan could get back to flying, only now he was also interested in a project working with kids. So when he met Stephen Walker, owner and director of Avionics West, Inc., at Santa Maria Airport in California, the two bonded over their love of aviation and their mutual desire to get kids similarly interested and involved with flight.

“Steve and I had a common interest in getting kids involved with aviation, and we came up with the idea of getting our hands on an old airplane and motivating kids to help fix it up.” One day, when Googling “rebuilding airplane parts,” Dan came across the Website for Build A Plane, a nonprofit organization that hopes to get kids interested in aviation through airplane reconstruction projects. “I e-mailed the group and got an enthusiastic response very quickly, and that’s how we got connected with the Build A Plane group,” says Dan.

At Santa Maria Airport, Dan noticed an old Cessna 172 rotting away and, through its tail number, found the owner’s house. “Steve and I made a trip to visit the man, and when we reached the house, it was completely boarded up,” Dan remembers. “Weeks later, we found the owner’s widow, and she welcomed the chance to get the old plane off her hands. So, we secured this old plane and then we were asking ourselves, ‘How are we going to get kids involved?’”

Dan contacted the local Big Brothers organization in the Santa Barbara/Santa Maria area—the group loved his idea. “They told us about some ‘big brothers’ at Vandenberg Air Force Base [in Santa Barbara County],” Dan said. “We met Ben Roope, an Air Force officer and a big brother. He came with his little brother [to Avionics West’s hangar, where the program takes place], and our program was off the ground!”

“It’s very important for us that we keep the kids involved,” asserts Dan. “It can’t just be manual labor; we have to keep them interested.” Eventually Dan and Steve hope to put a PC out in the hangar that’s equipped with educational wireless video game programs.

Dan and Steve are coordinating with the Boy Scouts to form a Venture Crew (open to boys and girls from 14 to 20) at Santa Maria Airport. “We’ll be meeting with local high school counselors before summer vacation starts to generate more young aviation enthusiasts,” says Dan. Through the Venture program, crew members will learn about aeronautics, mechanics and avionics as well as potential aviation careers.

At the moment, the Build A Plane group has at least two sessions per week. Two big brothers from Vandenberg come with their two little brothers. Soon, the group hopes to get six to ten Venture Crew members. Dan wants to eventually offer flight lessons and “perhaps start a flight school that will inspire kids to develop their interest in aviation.”

The ultimate goal, however, is an operation that’s capable of running “mercy or angel flights.” Dan’s girlfriend, Nancy, who’s a nurse, is developing criteria for potential mercy flight passengers. “For example, we’re not going to fly someone for a cosmetic Botox treatment,” he jokes. “Once the 172 is complete, we hope to use it for these angel flights. The kids will be able to see the direct results of their endeavors,” Dan says hopefully.

“We’re coordinating an affiliation with the Organ Procurement and Transplant Network [www.optn.org], as well as with local physicians that care for patients who may need aircare flights for transplants or chemotherapy,” Dan notes. He’s started a coordination center on his Website for patients and pilots: www.altusair.com/aircare center.htm. “We’ll beta test the idea here in Santa Maria and, in time, expand the program to other places, such as Fresno.”

But first, there are a few items on Dan’s wish list. Dan hopes that a corporate sponsor may express interest in the program in the near future. He’s created a Web page (www.altusair.com/supplies.htm) outlining the parts and supplies necessary for the local Build A Plane project’s progression.

What does Dan ultimately want kids to get from this? “Not just angel flights,” he says. “I want them to learn about aviation. To find a potential career. And, most importantly, to keep them off the streets, out of trouble.”

For more about Build A Plane, visit their Website, www.BuildAPlane.org.