Ask a native English speaker what method he uses for constructing a sentence and you’ll probably get a blank stare. After all, most of us don’t read a textbook and come up with a formal approach to grammar before we write an email; we just write what sounds good. So why do we insist on a robotic approach when it comes to teaching instrument flying?

In the Instrument Flying Handbook, for example, there’s a lot of talk about the “primary and supporting” or “control and performance” methods of instrument flying. Similarly, some instrument students are so weighed down with mnemonics that they can hardly fly the airplane—was it turn, twist, time, or twist, turn, tune? These concepts have some value in the training environment (although I confess I never heard any of them during my instrument training), but relying too much on them during instrument training risks confusing the student instead of helping them.

It’s part of our modern obsession with algorithms, I suppose: if you can just define all the variables and possible scenarios, you can create a model that guarantees consistent performance. That works for computers—just look how nicely a GFC 700 flies an ILS—but it’s not the way humans are wired. 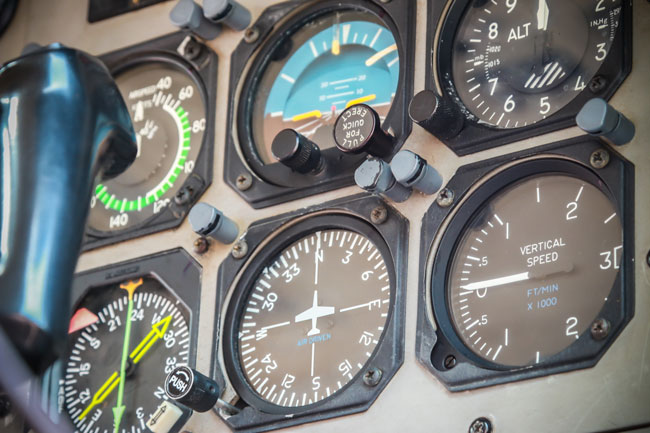 Earning an instrument rating isn’t so much writing a computer program as it is learning a foreign language: you already know how to fly, but now you need to learn a new way to do it. That’s why I think flight instructors could learn a few lessons from the French teachers of the world. First among those lessons is the value of immersion, where students are forced to speak French from day one, and where developing an innate sense for the language is emphasized over rigid grammar rules. Fluent speakers can actually think in French, and not merely translate from their native language.

The best instrument training follows a similar pattern, although I haven’t heard anyone call it “immersion IFR” yet. Instead of talking about primary and supporting instruments, a great CFII will simply teach the student what normal looks like on the instrument panel. Then a little experimentation might be in order: how do the instruments react to power changes, steep turns, or full flaps? Finally, it’s worth flying a few approaches, without a long discussion about precision vs. non-precision or LPV vs. LNAV. Just fly an approach and try to keep the needles crossed, all the while watching the panel.

Certainly a more formal syllabus will follow, but the real goal is IFR fluency. A proficient instrument pilot doesn’t have to read an instrument and translate it into VFR; he or she can sense immediately where the airplane is and where it’s going. In fact, shooting an ILS to 200 and 1/2 can sometimes feel almost automatic, as if the airplane is in slow motion. Some pilots call this the zen of instrument flying, when you become one with the airplane. A better word for it is probably flow: that state of mind where you are hardly even thinking, like a great basketball player calmly draining another shot.

Getting to that point isn’t fast or easy. It most definitely demands practice and yes, even a little time with the textbook. But instead of rigid rules, I prefer to focus on a few good habits.

Technically called “instrument cross-check” by the FAA, a healthy instrument scan is like good grammar for instrument flying: it determines the structure of things, and while you can’t always describe it, you know it when you see it. Scanning the instruments does not mean a random or rushed path, but rather a disciplined approach to assembling all the important information and creating a complete picture of the flight.

The Attitude Indicator Gets The Most Attention

While different pilots will have different scans, the attitude indicator should be at the center of all of them. Instruments can fail or lie, but when in doubt, start with attitude. It usually tells the truth.

Have A Theory Before You Make A Control Input

This is often shortened to, “don’t chase the needles,” but it’s more important than that. It’s really a mindset: you don’t follow the needles, they follow your plan. Before beginning a takeoff, an approach, or a hold, you should have a heading, power setting, and vertical speed in mind—this is your theory. Then, during the maneuver, you can look at the instruments with an expectation of what they should show. If reality doesn’t match your theory, make a refinement. This leads to much more precise and stable flying.

Use A Few Shortcuts

Sometimes you need an educated guess to make your flight a little smoother. Three of my favorites relate to turns, level-offs, and intercepts. For rolling out of turns, especially steeper turns, a good guess is to start reducing bank when you’re within half the degrees of your bank angle (start applying left aileron in a 30-degree right turn when you’re within 15 degrees of your desired heading). To prevent an aggressive pitch up or down, begin to level out when you’re within 20% of the climb rate (at 5,800 feet if you’re climbing for 6,000 feet at a rate of 1,000 fpm). When choosing an intercept angle, a good start is to put the lubber line on the CDI needle (this requires an HSI)—a larger deviation will require a larger intercept angle.

Know The Essential Profiles For Your Airplane

This tip can make instrument flying a lot easier, especially in higher performance airplanes. You should memorize the key power/flap/gear/airspeed configurations for each airplane you fly, including max climb, initial approach, and final approach. For example, if you know that 20 inches of manifold pressure and 10 degrees of flaps will deliver 100 knots in level flight, set that configuration outside the final approach fix and get back to flying. Then, as you approach glideslope intercept, you can fine tune it if needed. It’s a great way to reduce workload at critical times, and can also bail you out in an emergency.

Perhaps the most important skill to develop during instrument training is the ability to understand what matters and what doesn’t. Even in a simple Cessna 172 cockpit, there are plenty of gauges, switches, and knobs to distract you. Single pilot IFR is all about focusing on what is important (attitude above all else) and occasionally checking to see how other things are going (engine instruments green? CDI centered? Airspeed where you want it?). If you feel overwhelmed by the radio or an emergency, focus on what is essential and what isn’t.

While IFR flying looks like a rigid, structured process to non-pilots, most instrument pilots know better. At its finest, it is an art, not a science.

John Zimmerman is Vice President of Sporty’s Pilot Shop’s Catalog Division. He regularly flies a Citabria and a Pilatus PC-12. You can find John’s blog on Air Facts at airfactsjournal.com.