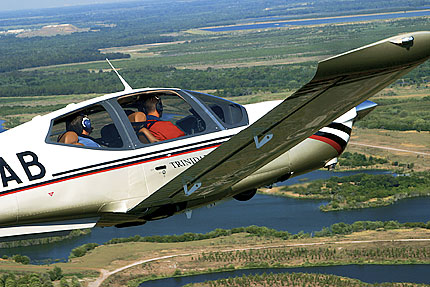 By any measure, the sky around us is an aviation mecca. For one week each spring, the weeklong Sun ’n Fun Fly-In brings thousands of flying machines and several hundred thousand people to warm, comfortable central Florida.

It’s early morning on the third day of Sun ’n Fun, and in the far distance, we can see the line of airplanes already starting inbound toward Lakeland Airport. I’m headed the opposite direction in a new Socata Trinidad GT. It’s Socata’s 20th anniversary version of its retractable single. The Trinidad GT is a highly-modified, retractable variation on the earlier Aerospatiale Rallye singles, the 150, 180 and 235. Certainly one of the TB-20’s primary attractions is its big cabin. From the beginning, Aerospatiale concentrated on designing an airplane around an unusually roomy and comfortable cockpit.

The company started with a wide interior, 50 inches across at the elbows. The Trinidad’s large cockpit allows the use of a center console that houses most of the engine, fuel, flap, trim as well as electrical controls.

Next, Socata applied automotive interior-design techniques, fitting seats that look more appropriate to a BMW or Audi, plush, smoothly contoured, multi-adjustable bucket seats that support in all the right places.

The panel is conventionally split into three segments: flight instruments on the left, radios on the center and power instruments on the right. The Trinidad incorporates maintenance features that should make mechanics and avionics technicians cheer. Left and right instrument panels hinge at bottom front and swing down to allow ready access to the gauges. Similarly, there is a trio of panels atop the cowling and just aft of the firewall that provide access to avionics.

One of the Trinidad’s signature design characteristics is its gull-wing doors. They’re hinged at the roof and swing up and out for entrance and egress to front or rear seats. Socata’s gull-wing entryways are built tough, they look great, and they open up a huge entryway to either row of seats.

If there is any significant wind-blowing, the doors can blow down unexpectedly, or the hinges may be warped by a gust of wind. On the plus side, the fiberglass frame doors are almost pure-clear Plexiglas from the pilot’s and copilot’s elbows almost to the tops of their heads. This makes visibility to the sides and up quite exceptional.
Advertisement

A cursory examination of the Trinidad’s wing might suggest the airfoil is a standard Hershey-bar design. Hardly. Although there is nothing terribly unusual about the wing, it was computer-designed specifically for the Trinidad. Goals were predictability and safety, and Aerospatiale achieved those goals in spades.

For the aerodynamicists among you, the small, rectangular, 128-square-foot wing is a constant-chord, RA16-3C3 airfoil with 6.5 degrees of dihedral, conventional in shape and Cherokee-like in configuration, but it provides the Trinidad with a comparatively high 24.1 pounds per square feet of wing loading. High wing-loading lends itself to a smoother ride in turbulence. It’s hard to imagine a more docile high-performance retractable airfoil. In combination with 250 hp out front, the wing generates sea-level climb in excess of 1,000 fpm.

The TB-20’s empennage also is a little different, featuring totally separate horizontal and vertical tail surfaces with the lower, all-flying stabilator mounted well aft of the vertical. The rudder is reasonably effective, but hardly necessary for coordination of most normal maneuvers.

In addition to their obvious visual appeal, the TB-series airplanes benefit from high-tech applications of aerospace construction techniques and equipment that make the airplane simpler rather than more complex. The Caribbean singles are built at Socata’s ultramodern Tarbes, France, facility. Parts are manufactured on the same numerical control machines used to subcontract components for Airbus airliners, Falcon business jets and Eurocopters. With the help of its advanced design and automated manufacturing equipment, Socata realizes economies not possible for other builders. The company puts together the fixed-gear Tobago’s 800 parts in only about 600 labor hours. The more complex, retractable Trinidad is slightly more labor-intensive, but still far less time-consuming than other, comparable airplanes.

Power for the Socata Trinidad GT is provided by a 540-cubic-inch Lycoming engine, specifically, the IO-540-C4D5D, derated to 250 hp. This is essentially the same engine that was used so successfully in pairs on the old Piper Aztec, so it’s a well-proven powerplant, under-worked and rated for 2,000 hours between overhauls. It’s interesting that Lycoming uses the same block to produce up to 350 hp for applications such as the Piper Navajo Chieftain.

Max takeoff weight is listed at 3,080 pounds (1,400 kg in European-speak), and a typical empty weight runs about 1,900 pounds. The test airplane had the optional air conditioning, which probably boosted empty weight by at least 50 pounds and price by an additional $18,000. In other words, there is a payload-per-price penalty for the privilege of a cool cabin on the ground.

The result is an empty weight just under 2,000 pounds, so full-fuel payload winds up right at 540 pounds, about what we’ve come to expect from most single retractables. Technically, the Trinidad is a five-seater, but it’s hard to imagine a loading situation that would allow carrying five folks, unless the aft three were children.

Its engine start is pure Lycoming, and taxiing is conventional with nosewheel-steering through 18.5 degrees of turn. Once off the runway with wheels in the wells, rate of climb is an easy 1,000 to 1,100 fpm at gross, 1,200 fpm with two up front and full tanks—the way most pilots operate four-seat retractables most of the time. Initial climb bleeds off to about 700 fpm at 8,000 feet, where upward mobility often is more critical. Service ceiling is listed at 20,000 feet for the normally-aspirated Trinidad. If you need more altitude capability, you can opt for the Trinidad TC, which is approved for flight at 25,000 feet.

The new Trinidad offers no great surprises in straight-line performance, not a big shock, since the basic airplane remains, aerodynamically, pretty much the box it came in back in 1984. Externally, the TB-20 hasn’t changed much in the last two decades, although it incorporates a retractable step (that hides with gear retraction) and wingtips from the turboprop TBM-700.

Cruise with the left lever to the stop at a 7,500-foot density altitude works out to 155 to 160 knots, depending on load, rig, CG, temperature and the phase of the moon. Pulled back to 55% up at 11,500 feet, the number is more like 140 knots. Best economy fuel burns at the above settings are 14 and 11 gph, respectively. With the price of avgas well over $3 per gallon in the U.S. and at least half again that figure overseas, hardly anyone uses best power settings anymore, but if you feel a need for a few extra knots of cruise, you could plan on spending about two gph more at each setting.

The TB-20’s handling falls somewhere between a Piper Arrow and a Skylane RG. Roll control is reasonable, and pitch authority is quick; the airplane lays into turns with the authority of a heavier machine, and hands-off stability is good.

Perhaps because of Aerospatiale’s military and aerospace experience, the Trinidad’s manual is unusually thorough, even including a chart called “Antennas’ Effect On Performance” for cruise loss to various antenna and light installations. Everyone knows that hanging antennas and lights from an airplane subtracts speed, but I had never seen engineering data that quantified the loss until I checked the TB-20 handbook. (I own a Turbo Mooney with 13 antennas hanging out, sometimes referred to as the “Pincushion” by my avionics expert, Robin Howard, and I’ve always wondered what those antennas cost me in speed.) 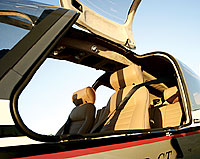 The chart suggests an ADF antenna (for those strange folks—like me—who still use ADF) costs about .75 knots, a VOR antenna subtracts .59 knots, a glideslope antenna deducts .32 knots and even the tiny ELT antenna reduces cruise by .16 knots. Additionally, Socata suggests wingtip strobes decrease speed another .43 knots and a rotating beacon subtracts .16 knots. Put them all together, and a full package of IFR antennas and lights on a standard Trinidad will diminish cruise by 4.3 knots. The accuracy of the figures suggests the numbers probably were obtained theoretically (in a wind tunnel) rather than empirically. Granted, there are different types and styles of antennas, and these values wouldn’t necessarily hold true in other airplanes and different speed regimes, but they may be somewhat representative for retractables in the 140- to 180-knot class.

(The late Roy Lopresti, speed guru, former NASA rocket scientist, president of Mooney and all-around good guy, told me he had once stripped a 201 of antennas and recorded 3.5 knots better speed on the totally clean airframe, so Socata’s numbers look about right.)

Gear and flap extension result in minimum pitch disturbance, but they do generate a notable difference in power-off stall speed. With the underwing totally clean, the GT stops flying at a quick 65 knots. In full dirty configuration, gear down and full flaps, stall drops all the way to 54 knots, and the stall itself is a non-event.

Approaches in the Socata Trinidad GT work well at any speed from 80 to 120 knots. The airplane makes a stable instrument platform, happy to drive down the ILS in soft- or hard-IFR conditions with minimum fuss. Excursions are generally easy to correct, and the Trinidad seems to settle easily into that indefinable “groove” that instrument pilots recognize.

Compared to the Aerospatiale Rallye STOL models that featured leading-edge slats and more aggressive flaps, the Socata Trinidad GT doesn’t post spectacular short-field numbers, but the TB-20 does just fine on unobstructed strips that are longer than 2,000 feet. The model’s tough, trailing link gear system absorbs most reasonable impacts and even some unreasonable ones to smooth the most ham-handed touchdowns.

Price is always in the eye of the debtor, but at $419,000 base, the 2004 Trinidad GT is more expensive than either the Cirrus SR-22 or Lancair Columbia 300, and it’s about $30,000 more pricey than a Mooney Ovation 2DX. Remember, however, that the base price buys a well-equipped airplane—a Garmin 430 and 530, 330 transponder with traffic uplink and 340 switching panel, Shadin fuel computer, backup artificial horizon, a Stormscope, a KFC225 flight director and autopilot, a pair of Bose X headsets and virtually everything else you would need for normal IFR conditions. The two biggest options are air conditioning and a TKS anti-ice system.

With the exception of Diamond’s fixed-gear Star and C1, the Socata singles are the only foreign airplanes to succeed in America’s piston general-aviation travel market. France’s premier high-performance retractable Trinidad GT offers an uncommon combination of ingredients that makes the airplane more than competitive with its American counterparts, especially when it comes to comfort.