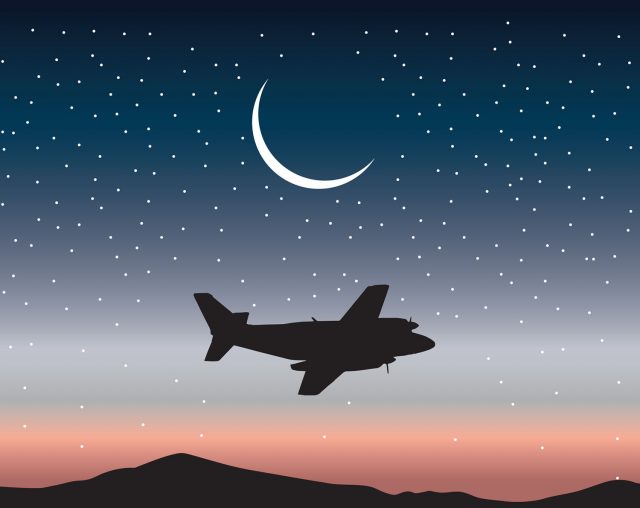 I am a firm believer in sharing what I have learned from my own mistakes to help others learn from them. This story is one of those examples. I was navigating VFR in the pre-dawn hours, cruising along comfortably at 6500 feet MSL from Detroit (KDTW) airport headed back home to Allegan, MI (K35D). I was diligently scanning for traffic through my eyelids, my head rested carefully on the side window of the Piper Chieftain. I was, well, in this case, along for ride in instead of actively flying.

I say I was scanning for traffic “through my eyelids” because they were closed. Had I had anyone else with me, they might have even caught me snoring a bit, I am guessing.

The flight was one I had done early in the morning to drop off a couple of my staff off at Detroit’s main commercial airport so they could fly out to pick up an aircraft our FBO was going to be working on. Wanting to get them to an early departure, I got up early and flew them there and returned by myself in the aircraft. With no one to talk to, and having gotten too little sleep the night before, I found the return flight before the daylight for a highly fatigued pilot was a recipe for a dangerous nap once the autopilot had been engaged at my VFR cruising altitude on the way home.

Okay, so, you might be thinking, how bad can a little quick nap be, really?

Fatigue is a very serious concern that we have to evaluate carefully as pilots. Many times we are balancing the desire to use our aircraft as the time machines we think they are to get to and from meetings, visits with family or vacations that might otherwise cause us extra days of travel. But when we do this at the end of long days, without proper rest early in the morning or just when we have gone beyond the point of personally being too tired to perform optimally as pilots, we are compromising our safety and the safety of any of those with us or who may share our airspace.

The hard part about fatigue in flying is determining when we really need to call it a day and put off a flight. I have taken flights that started at 10 p.m. and flown through the night, arriving at the final destination as the sun arose the next day, and have been fine, while other times I find it hard on a mid-afternoon flight to win the struggle to keep my eyes open. It really takes some diligence and evaluation of your own condition to determine if you are safe to fly. I know from personal experience, I have gotten to a point where if I am questioning it at all, convincing myself that “it’s just a short flight, I will be okay until I get there and can rest then,” that it is probably time to reschedule the flight.

Airlines and charter operations have operational maximums that their pilots are allowed to fly for good reason. In personal flying, these limits are not thrust upon us from a regulatory requirement, but it might be really good advice to at least mirror them in our own flying. Consider this also: An airline pilot might be limited to eight hours of flying in a day, but that is their job. That doesn’t mean they go do their “day job” for eight hours and then fly home for six hours. Consider the overall footprint of your day, not just the flight time you plan to complete.

The human body needs rest, and it falls into rhythms that make it more or less capable of operating efficiently at different times of the day. It is natural for most people to be more awake during the daytime than when it is dark. Basic physiology takes over here at some point and should be considered. If you have gone a long time without rest, the body is going to try to get some when it can. Even if you are cruising along with the autopilot on during a calm evening flight.

Learn to listen to your body and identify the symptoms of fatigue. Many of us push beyond these and try to ignore them, thinking they aren’t all that dangerous.

The same pilot who would never consider flying after drinking alcohol might go flying after a long day of work without rest. The effects are really not all that different to a significant degree on how they affect the performance of the pilot. In fact, in an article by the National Sleep Foundation entitled “Drowsy Driving vs. Drunk Driving: How Similar Are They?,” it is noted that, “Drowsy driving is dangerous because sleep deprivation can have similar effects on your body as drinking alcohol. Being awake for 18 hours straight makes you drive like you have a blood alcohol level of .05 (for reference, .08 is considered drunk). If you’ve been awake for a full 24 hours and drive—say, after a night where you just couldn’t fall asleep—it’s like you have a blood alcohol level of .10.”

Pardon the pun here, but this is pretty sobering.

When you are tired, your motor skills are degraded and your reaction skills are dulled. You are not as effective as a pilot. And you certainly wouldn’t handle an abnormal or emergent situation in your aircraft to the best of your abilities.

I don’t have any data to prove this, but I honestly even think we may be at an even greater risk of flying fatigued now than we may have ever been in aviation history. Part of this is because of the wonderfully capable aircraft many of us fly with highly effective autopilot systems. These systems allow us to rely upon them, thinking that even if we are a little tired, they will do most of the work for us and keep the workload down for a flight we might be doing at the end of a long day. At the same time, they take some of the engagement away, engagement that might have historically kept us physically flying and moving as we cruised on a route home instead of becoming a passenger who is more or less riding, and, thus, maybe even finding it easier to nod off into a nap.

So, back to the story I started with. How long was it I was asleep? Well, too long.

I remember seeing Jackson, Michigan, off my left wing as I headed home, grudgingly thinking how much further I had to fly in my tired state that morning before I nodded off. I fortunately woke up a few miles short of my destination, as I crossed a major interstate I knew well, Michigan’s Highway 131 that runs north-to-south. A little confused, I quickly realized how long I had been asleep.

My sleeping condition had passed over 50 miles of Michigan for something near to a full half hour of unattended flying!

I remember this experience any time I think about flying when I am too tired. As a result, on a number of occasions, I have mitigated the risks by taking another, more rested, crew member, getting a good nap in to refresh myself, or staying that extra night and leaving the next day. I have even stopped a couple flights midway to my destination when I found myself more tired than I thought I was going to be when I originally left, finding a place to call it a night and start again the next day when I was rested.

Find yourself tired when you are going to begin a flight or during one? I suggest you learn from my experience and mitigate the risk also. The good news is that in our modern times, catching an Uber, Lyft or a taxi from an airport to a hotel you found had an open room is much easier with our phones and tablets than it was in the early days of aviation, or even just a few years ago. No excuses.