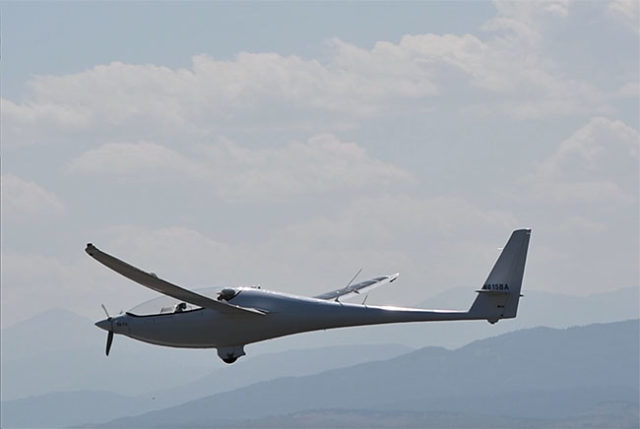 It looks like a glider. Okay, it looks kind of like a motor glider. And it is, but it’s not. The Bye Aerospace Solesa/StratoAirNet flew for the first time on Monday from an unnamed airport near Fort Collins, Colorado. And the world of aviation might never be the same. Okay, that’s an overstatement, but the thing is cool nonetheless.

The plane has two names because it will be available as a piloted aircraft or a UAV (Unpiloted Aerial Vehicle). The latter operate with a combination of remote and autonomous control.

While it looks like a run of the mill motor glider, the Solesa (we’ll call it that for now) is solar powered. It’s intended for “medium-altitude” flight. When it’s free of the weight of the pilot it will be a long-endurance surveillance platform (or, possibly, other functions). With a pilot aboard, it will be a shorter endurance platform, though capable, presumably, of fulfilling the same functions.

Bye Aerospace is also developing a small all-electric plane, the Sun Flyer, intended for training and personal flying. The company made the first flight of that plane earlier this year and has already taken a number of orders for it.