Making good on its agreement with the government of Dubai, German company Volocopter has begun testing of its Volocopter 2X two-occupant multicopter for use as an autonomous air taxi. Volocopter has been working on such a craft since 2011 and has developed it into a finished-looking product, as you can see in this actual photo of the flying multicopter, though the image seems to be of a craft with a single seat. 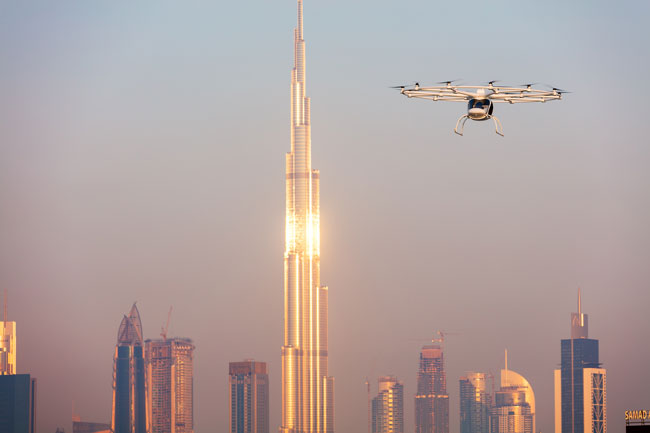 Reports indicated that the testing was a milestone and claimed that it represented the first use of a drone as an urban air taxi, but that has not happened and won’t happen, according to the company itself, for quite some time. The test phase is planned to take five years, during which time it will ramp up to autonomous passenger-carrying in carefully planned phases.

The recent flight, which lasted 5 minutes and took the craft to an altitude of about 700 feet, was done without any occupants aboard. There’s no word on whether the flight was autonomous or controlled from the ground, or some combination of the two.

The two-seat craft is powered by 18 rotors powered by nine independent battery systems. There will be an optional parachute recovery system, though we haven’t been able to find details on that option, either. With an endurance of 30 minutes and a cruising speed of around 30 mph, the capabilities of the Volocopter are not strong but might far better than a ground-bound taxi cab in rush hour traffic. The company says that future improvements in battery technology will allow for greater flight times and quicker recharging. It now takes a couple of hours to recharge the batteries. It does feature an excellent claimed payload of better than 350 pounds, and since it’s electrically powered, there’s no need to factor in the additional weight of fuel.