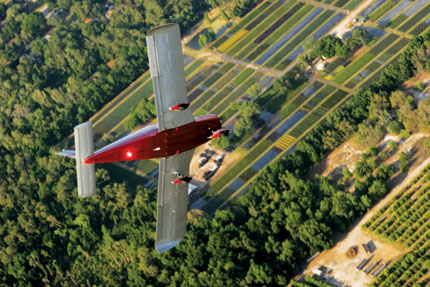 The accelerated stall usually surprises a pilot because it occurs at a higher airspeed than a normal stall (in which a wing loading of 1 G is maintained). Remember, a wing can be made to stall at any speed—all that has to happen is for the angle of attack to get high enough. As G-loading increases, so does stall speed. If a wing reaches its critical angle of attack when the wing loading is 2 G, twice normal, the stall will occur at a speed that’s proportional to the square root of the wing loading. The square root of 2 is approximately 1.41, so the stalling speed at 2 G will be 1.41 times what it would be under 1 G conditions. Accelerated stalls are often caused by abrupt or excessive control inputs made during steep turns or pull-ups. If you’re in a dive and pull back with enough suddenness and force to load the airplane to a typical design load factor of 3.8 G’s, you’ll enter an accelerated stall if the airspeed drops below 1.95 times the stall speed at 1 G loading (the square root of 3.8 is approximately 1.95).

One of the most dramatic accidents involving an accelerated stall occurred on September 6, 1985, at General Mitchell International Airport in Milwaukee, Wis. Midwest Express Airlines Flight 105, a DC-9, was taking off from runway 19R at about 3:21 p.m. The weather was clear; visibility was 10 miles. During initial climb, at about 450 feet AGL, there was a loud noise and loss of power associated with the right engine. Investigation would later indicate that there had been an uncontained failure of the engine’s ninth- and tenth-stage high-pressure compressor spacer.

The airplane continued to climb to about 700 feet AGL, then rolled to the right until the wings were nearly vertical. While rolling, the airplane entered an accelerated stall, lost control and crashed. Both pilots, both flight attendants and all 27 passengers were killed. The airplane was destroyed in the crash and fire that followed.

The NTSB studied the flight characteristics of the DC-9 and determined that in the event of a right-engine failure, it would be docile, easily controllable and not require any unusual skills or strength from the pilots. Investigators found that about four or five seconds after the uncontained right-engine failure, one or both of its pilots applied incorrect rudder pedal forces followed by aft control column forces that allowed the airplane to stall at a high airspeed—an accelerated stall. The NTSB determined that the probable cause of the accident was the crew’s improper use of flight controls in response to catastrophic failure of the right engine, which led to an accelerated stall and loss of control.

Of course, the aerodynamics of accelerated stalls applies to small airplanes as well as large ones like the DC-9. A Piper Cherokee was involved in an accelerated stall accident after an engine problem surfaced during an instructional flight. The PA28-180 had taken off from runway 28 at New Jersey’s Millville Municipal Airport at 3:28 p.m.; visual meteorological conditions prevailed. An IFR flight plan had been filed to Atlantic City International Airport. At about 600 feet AGL, the private pilot, who was working toward an instrument rating, entered a right turn for the Cedar Lake VOR. During the turn, the engine began to run rough and the tachometer showed that the engine rpm had dropped below 2,000. The instructor told the pilot to return to Millville. At approximately 500 feet, the pilot reduced power, applied flaps and prepared the airplane for a downwind landing on runway 10.

The airplane flew just above the runway, and the pilot noticed that there were workers and a jet aircraft in position for takeoff at the opposite end (runway 28). The pilot and instructor elected to perform a go-around. They applied maximum throttle and started a slight climbing right turn above trees at the runway’s end, then entered a turn to set up for landing on runway 28. During the turn, the airplane entered an accelerated stall; it was too low for a recovery, and the left main landing gear impacted the ground. The airplane then continued across a grass area and struck a group of trees. The pilot and instructor received serious injuries and the airplane was substantially damaged.

In another incident, a Spanish military jet was preparing to be flown around Pueblo Memorial Airport in Pueblo, Colo., so that people on the ground could take photographs for use in a promotional brochure for the upcoming air show season. The Hispano Aviación HA-200 Saeta was flown by a private pilot; visual meteorological conditions prevailed.

The airplane was serviced with 71 gallons of Jet A, and a Prist additive was added to an undetermined amount of fuel that was already on board (total fuel capacity is 152 gallons). At 7:12 a.m., the pilot was cleared to taxi to runway 26L and was issued a transponder code of 0333. At 7:16 a.m., after requesting touch-and-go landings, the pilot was cleared for takeoff and to “make left closed traffic runway 26L.”

Reports from witnesses indicated the airplane made what appeared to be a normal takeoff, lifting off about halfway down the 4,073×75-foot runway, 26L. It then rolled steeply to the left and the nose fell through the horizon. The airplane struck the ground, exploded and burned. The pilot was fatally injured.

An FAA inspector interviewed the pilot’s HA-200 flight instructor, who reported that the pilot was “above average…an aggressive pilot in command [who] knew the aircraft systems well.” During the fifth hour of instruction, the pilot expressed a desire to do some aerobatics. The instructor asked him to demonstrate a barrel roll at 12,000 feet. The instructor said that during the maneuver, the pilot lost 6,000 feet and rolled out 70 degrees off heading. The instructor then demonstrated a Cuban 8, an aerobatic maneuver. The lesson ended with the instructor advising the pilot not to perform aerobatics in the HA-200. He suggested that the pilot take basic aerobatic instruction in a slower, more forgiving airplane. The instructor submitted a written statement to investigators in which he said the pilot “flew well, flew safe and had a good command authority for his new jet. I was impressed with his command ability and attention to detail.” When the pilot said he planned to fly the airplane in air shows, the instructor informed him that “low-level air show work had huge, unforgiving risks involved” and that performing “aerobatics was totally out of the question.” The pilot said he would seek another instructor.

The instructor described the former Spanish Air Force trainer as “very docile.” He said the HA-200 takeoff profile was “fairly flat,” with retraction of the landing gear occurring between 100 and 110 knots. Gear retraction was slow, with the main gear retracting first, followed by the nosegear.

The instructor said he doubted the airplane could have climbed more than 200 to 300 feet, and airspeed would have been no more than 130 to 140 knots. This speed would allow for shallow turns. If, however, the airplane were to make a steep bank, as witnesses described, a 180-knot airspeed would be required to sustain a 60-degree bank. If the airplane stalled, it would always roll toward the low wing. With its “almost perfect center of gravity,” the airplane would recover from an accelerated stall after the pilot unloaded the wings.

The NTSB determined that the probable cause of this accident was the pilot’s failure to maintain adequate airspeed, resulting in an accelerated stall at an altitude too low for recovery. The pilot’s lack of experience in the aircraft make and model was a factor. The private pilot, who was rated for single-engine and multi-engine airplanes, wasn’t instrument rated and had logged 1,178 hours with 29 in type.

On November 16, 2004, after taking off from Clark Memorial Airport in Williams, Ariz., a Cessna Super Skymaster collided with terrain while scouting for elk around Drake, Ariz. The commercial pilot and two passengers were killed. A witness reported to an NTSB investigator that he had observed the airplane flying low and slow, in and out of the local canyons and valleys over the previous few days and on the day of the accident. He also stated that he had talked to another witness who said the airplane had flown about 100 feet over his camp on the morning of the accident.

The NTSB determined that the probable cause of this accident was the pilot’s failure to maintain airspeed above stall speed while maneuvering at low altitude, which resulted in an accelerated stall and spin. A factor in the accident was the pilot’s performance of maneuvering flight at an altitude insufficient to allow for recovery from an accelerated stall.