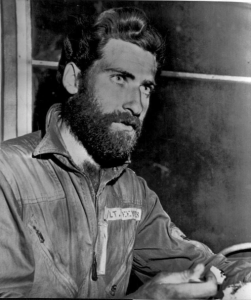 It was on May 9, 1957, that Lieutenant David Steeves was given a mission to fly a new training jet, a Lockheed T-33, from Hamilton Air Force Base in Novato, California, to Craig AFB in Alabama. The plane was lost from radar and the Air Force couldn’t find the missing plane or pilot. The military declared Steeves dead, and that was that.

Until, that is, 54 days later when Steeves emerged from the Sierra, having been found badly malnourished and still limping badly on swollen ankles.

According to Steeves, the otherwise routine flight was violently interrupted over rugged Kings Canyon Park in the Sierras when a fiery explosion sent the plane out of control. Steeves bailed out, descending by parachute and badly injuring both of his ankles in the landing.

The story that Steeves told was amazing. He said that after landing—it was estimated that he landed at extreme high elevation—12,000 feet, according to some reports. He somehow managed to descend the complex, snowy landscape and keep from freezing or dying in a fall. After 20 days, Steeves told investigators, he stumbled miraculously upon an abandoned ranger’s cabin, which gave him much-needed shelter and a bit of food, which he supplemented by fishing and at one point killing a deer with his service revolver. Nearly two months after the accident, Steeves was found by a pack train and taken out of the wilderness to be reunited with an incredulous Air Force leadership and a wife who had been told he was dead.

Steeves’ story attracted the attention of Hollywood and New York. The story was optioned to a studio and Steeves was given a lucrative book deal. He had survived a terrible ordeal and was coming out of it with opportunities aplenty. This state of affairs didn’t last long, however. His would-be publisher soon began focusing on discrepancies in Steeves’ story and canceled his book deal. And when the wreckage of the T-33 couldn’t be found, the Air Force began asking questions too. What had actually happened, and why couldn’t the T-33 be found?

The theory that garnered the most press was the most sensational. It went that Steeves had sold the top-secret plane to the Soviets, who took delivery of it in Mexico, later secretly flying Steeves back to the supposed scene of the crash. Steeves then emerged and play-acted the rest. The airplane was never found because there was no airplane to be found. And Steeves’ seemingly unbelievable story of survival really was so hard to fathom because it wasn’t possible.

Steeves parachuted from his plane and landed in the wilderness of the Sierras. The plane was lost in the vast wilderness of the mountains, and Steeves called upon his training, his courage and a good bit of luck to make it back out alive.

The conspiracy theory tale about the Soviets’ part in the supposed disappearance of the T-33 made no sense. By 1957, the T-33 had been around for nearly a decade and was already old technology. It would be largely obsolete within the next decade. The Soviets had no need for stealing a T-33. The mystery of the disappearance is just as easily explained. The Sierra wilderness is vast, as was evidenced by the failed search for aviation legend Steve Fossett, who went missing in the Sierra in 2007 and whose remains weren’t discovered until a year later and, even then, by accident. And during the search for Fossett, eight previously undiscovered crash sites were found, some dating back decades.

The final piece of the puzzle came in 1978, when Boy Scouts hiking in Kings Canyon National Park stumbled upon what would turn out to be the canopy (with matching serial number) of Steeves’ T-33, near where Steeves said he landed. The mystery was solved, in the sense that it was discovered that there was no mystery. Everything had apparently happened just as Steeves had said.

It was no solace to the young officer, however. Shadowed by doubts and rumors, he requested dismissal from the Air Force, and it was granted. His wife divorced him and took the kids, and Steeves went to work as a pilot in Fresno, California, not far from where he had crashed. In the years he worked in Fresno, he flew numerous flights in small planes looking for the wreckage of his mysterious T-33.

Steeves would die just a few years later, in 1965, more than a decade before the mystery, that never should have been a mystery, was solved. He was killed in Boise, Idaho, in the crash of a modified Stinson, the wreckage of which was found right away.