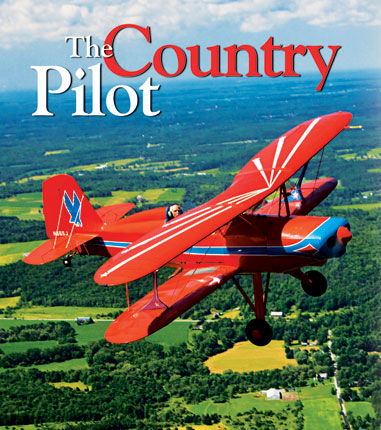 He calls himself the “Country Pilot,” and with his herd of taildraggers and 3,000-foot farm field, he cultivates the art, science and joy of simple stick and rudder flying. He’s even apt to begin sentences with, “I’m just a country pilot…,” when relating how he prefers good weather when flying his PA20 Pacer on the 1,000-mile journey to Sun ’n Fun, or why the Pitts S-2B he bought himself as a retirement present in 2002 has all the performance he’ll ever need for aerobatics.

“I live in the country, and we’re kind of unsophisticated,” Wolfgang Buergel says at his hilltop aerie, Bloecher Farm Airport, near Buffalo, N.Y., explaining the roots of his sobriquet. “We don’t have the TVs and the radios and all the other stuff you got. We’re just sport flyers.”

Don’t let the self-deprecating demeanor fool you. Buergel, tall and slender, is something of a legend in western New York’s aviation community (www.countrypilot.com). Few people around these parts know as much about how to fix, build or fly an airplane. He can take a student from primary training through aerobatics, or repair just about anything from a J-3 Cub to a Boeing 737. But most people come to Buergel and his country airstrip to learn how to fly tailwheel aircraft.

“He’s a wonderfully talented pilot and teacher,” says Rick Volker, of Niagara Falls, N.Y., who took aerobatic lessons from Buergel, and today flies an Extra 300L, Sukhoi Su-26M and a Supermarine Spitfire on the air show circuit. “He can fly a rock.”

“This is the guy to go to, I truly believe, if you want to get a tailwheel endorsement,” says Greg Barnhard, a CFI who did his taildragger training with Buergel. “He’ll say, ‘I’m just a country pilot,’ but he’s probably the best pilot I’ve ever met.” (For the record, Barnhard, of Orchard Park, N.Y., gives equal plaudits to the instructor from whom he got his primary, instrument, commercial and CFI ratings: Buergel’s son-in-law, airline pilot Peter Treichler, of Wales, N.Y.)

Buergel, a native of Germany, emigrated to the United States with his family as a teen in the mid-1950s, settling on Long Island where his father worked at Grumman, building airplanes. Already infatuated with aviation, following high school, he joined the army, learning helicopter maintenance and earning his pilot’s license at the base flying club. After discharge, Buergel moved to the Buffalo area with wife Sandy and enrolled at the University of Buffalo on the G.I. Bill. Not that long after, they found their dream home.

Yet those early Buffalo years also revealed a Buergel starkly at odds with the affable, “just plane folks” image that the Country Pilot projects today: The ostensibly simple flying farmer graduated from college with a Ph.D. in chemistry. “It wasn’t my cup of tea,” he says. “I went back to aviation.”

On a glorious summer afternoon, a visit to Bloecher Farm Airport (named for the previous property owner) is a cross between a laid-back lawn party and a trip to the golden age of aviation. Friends drop in to talk airplanes. Sandy brings out homemade cookies and lemonade. Buergel’s fleet of aircraft is arrayed on the grass and inside a pair of hangars: the Piper J-3 Cub, Piper PA20 Pacer, Aeronca 7AC Champ, Aeronca 15AC Sedan, Stolp SA300 Starduster Too and Pitts S-2B. Taildraggers one and all, and there’s a story behind each.

“This was a basket case—literally: bushel baskets and boxes of parts,” Buergel says, standing beside the Pacer in one of the hangars. “It had kind of a bad history: It crashed the first year of its life, and by the time it was four or five years old, a hangar collapsed on it. I’m the sucker who finally took it home.” 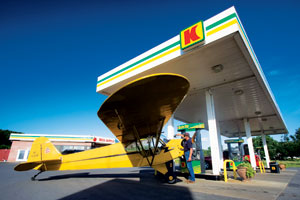 Buergel was probably the only person within a tank of avgas who could put it back together. Besides his knowledge and experience, in one of the large outbuildings, he also has the most impressive machine and tool shop this side of a major manufacturing plant. Today, the completely rebuilt Pacer is Buergel’s traveling airplane.

“Whenever I go somewhere, that’s what I take,” Buergel says. “We visit our son down in Lockhaven [Pa.]; I take it to Oshkosh. It’s roomy enough—I’m six feet tall, and I fit in it pretty well. It’s got the original 125 horsepower engine, and it cruises right along at about 100 knots. I make that trip to Sun ’n Fun in one day, but I’ve got to do a bunch of stops.”

His 1942 J-3 is reserved for local pleasure flights. “I use it for my evening cruise,” Buergel says. “I love to fly it with the door open on a summer evening.” 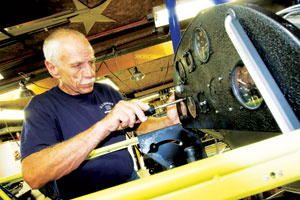 The Aeronca 15AC Sedan is chocked behind the Cub. “It’s a very nice flying airplane, and it has a tremendously large wing,” he says of the Sedan. “It’s amazing what it will do with just a 145 horsepower Continental. I can put four people in and get right out of here, with not a worry in the world.

“But I don’t fly it that much. It’s set up as a glider tug,” adds Buergel, who loves to fly a Schweitzer 1-26 sailplane he rebuilt, “but I don’t have a tow pilot. It’s a vicious circle.” The Country Pilot sounds momentarily wistful: “The Aeronca is one of those airplanes that migrates to the back of the hangar.”

Buergel has certainly seen his share of airplanes come in and out of favor. When he first moved to the area, he specialized in servicing the Grumman Ag Cats used in agricultural operations around the region. But as more people moved to once-rural areas, aerial sprayers began to disappear, and in ’87, he went to work for U.S. Airways, maintaining BAC 1-11s, DC-9s, MD-80s and B-737s. Since retiring in 2002, he spends time on his motorcycles, his airplane projects and his flight instruction.

The 1946 Aeronca 7AC Champ is the workhorse of his trainers. It sports the semi-faded red with blue accents that are practically the livery colors of his fleet. “This is the one that does all the flight instructing; it’s better than a Cub for teaching,” Buergel says. “It’s roomy, for one thing, and it needs rudder. It’s built so it has a lot of adverse yaw—I’m sure it was done intentionally—and if you don’t fly with rudder, it’s a disaster. It exaggerates the need for rudder. So if you fly this, you can fly anything.”

A former Sportsman-level aerobatics competitor, Buergel uses his 1993 Pitts S-2B for both work and play, though he admits he’s not one for performing radical routines. “I’m just a country pilot—I don’t do any of the fancy stuff. I can do slow rolls and snap rolls and verticals and loops—basically Intermediate-level maneuvers. The airplane is so much more capable than I am.”

Buergel has an aerobatic box right over his property. When he wants to practice, he calls to activate the airspace and flies while Sandy—who, like Buergel, has gone through IAC (International Aerobatic Club) Judges School—keeps a discerning eye on his maneuvering.

“I sit on the lawn chair with binoculars and critique him,” Sandy says. “I get on the radio and say, ‘Hey, you pinched the top of that loop. Try it again!’”

No doubt, aerobatics and tailwheels are great for getting pilots of all experience levels back to the basics of stick and rudder flying. But to transport one all the way back to the golden era, you need an open-cockpit airplane—like Buergel’s Stolp SA300 Starduster Too, N66SJ.

Buergel…is something of a legend in western New York’s aviation community. Few people around these parts know as much about how to fix, build or fly an airplane.

Created in the late 1960s by legendary homebuilt-aircraft designer Lou Stolp, of Riverside, Calif., the Starduster Too was the first two-place, plans-built biplane. But it wasn’t just the novelty that attracted attention: The one-place Starduster was regarded as among the prettiest biplanes ever designed, and the Too carried on the aesthetic tradition. Hundreds were built. In fact, Buergel started one himself that remains unfinished to this day. The one on the field was a gift from a friend who ground-looped it, damaging the undercarriage and fuselage. Of course, Buergel restored it to airworthy condition.

“I’ve been flying it for 25 years,” he says. “This is perfect for what I do now, flying around gently with the wind in my face. I put my wife in there and we go places, fly to breakfast or whatever.”

The graceful elliptical curves of the upper wing and the turtle deck—the sloping protuberance that forms a backrest for the rear-seat occupant—are its most distinctive features. “I think it’s one of the most underrated of the biplanes,” Buergel says. “It’s a joy to fly, has nice control harmony and it can do a lot with not much horsepower.”

Starduster Toos can take powerplants from 150 to 260 hp. Buergel has a 150 hp engine and propeller from a Tri-Pacer, and he has removed the electrical system, further reducing weight and making this an exceptionally light and nimble example. The engine has an Ellison Throttle Body fuel-injection system and a Christen Inverted Oil System, and the standard 26-gallon fuel tank incorporates a two-gallon inverted tank, so the plane can fly upside down for perhaps 15 minutes.

Buergel and I strap on cloth helmets and climb in. Switches off. Someone pulls the prop through. Crack the throttle, prime the engine, switches on, pull the prop…it takes a couple of repetitions, but soon the prop is a blur and we’re taxiing for a north departure. Bloecher Farm isn’t one of your manicured, flat-as-a-pool-table turf strips. There’s a hump about 1,000 feet from the north end of the runway and tall trees to the south. Because of this, takeoffs are typically made to the north and landings to the south, so sometimes pilots have to take off or land with a slight tailwind. All this makes for excellent training—if you have someone with Buergel’s skills in the airplane with you.

The wind sock is limp and the sky is clear. No one to call on the radio, and other than a handheld, no radio to call them on. We advance the throttle, and the Starduster trundles down the runway, lifting off before we come to the little hill at the north end. I’m in the front seat, not paying attention to the minimal instrumentation, concentrating instead on the feel of the airplane—if it likes the climb angle, how sensitive its pedals are, how responsive the stick is. We level out at 2,500 feet—just about 1,000 feet AGL.

The Starduster Too was designed for light aerobatics, but it’s not an airplane that flies the maneuvers itself. “You have to work, but it’s not hard work,” Buergel had said on the ground. “It’s just that you have to move a lot of controls to get things done. It has so much wing and so much lift that you’re actually flying.”

Indeed we are. Green, rolling hills—a quilt of forest and field—spread out in every direction. The wind is blowing in my face and the air is redolent of—cow manure! We’ll get to the maneuvers shortly, but for now, I want to enjoy this sensory assault: the sound of the engine and the wind in the rigging, the feel of the airplane in my hands, the sensation of the air flowing over me like it’s being sprayed from a fire hose and that sweet organic odor. It’s flying at its most simple, pure and intoxicating. Yes, I may live in a big city and my plane may have tricycle gear, but at least for the moment, I too am just a country pilot.